The final match of the ICC World T20 2021 is here. Australia and New Zealand will fight for the title at Dubai International Stadium, Dubai and the cricketing world will get a new world t20 champion after this game.

Both teams are coming off a nail-biting victory in the semi-finals. New Zealand needed 57 in the last 4 overs while Australia needed 50 in the last overs and both teams won the game with an over left. Both the sides will be high on confidence and it’s going to be a cracker of a final today.

New Zealand  has been very disciplined with its approach. They have played as a complete unit throughout the tournament and they’ll look to continue the same in the final as well. Daryl Mitchell scored a brilliant 72 in the last game and is looking in good form. Senior batters like Martin Guptill and Kane Williamson will have to be at their best in this game. Jimmy Neesham played a match-winning cameo against England.

Tim Southee and the spinners, Ish Sodhi and Mitchell Santner were brilliant with the ball. Trent Boult and Adam Milne went for runs but they’ll be eyeing a good performance in this most important game of the tournament. Neesham too did a good job with the ball.

Australia batted very aggressively in the second semi-final against Pakistan. David Warner and Mitchell Marsh played freely despite losing Finch early and laid a solid foundation. Both Warner and Finch looked in excellent touch and Aussies will expect them to do the same in the final as well.

The poor form of Steve Smith and Glenn Maxwell is a concern but they are big match players and expect them to come back stronger in this big match. Marcus Stoinis is looking good with the bat lower down the order and we all saw how Matthew Wade snatched victory from the jaws of defeat in the last game.

The Aussie bowlers got a bit of a beating in the semi-final against Pakistan but they’ll give their all in the finals. Mitchell Starc, Josh Hazlewood, and Adam Zampa will be the key bowlers for the Aussies. Pat Cummins has had a poor campaign so far. Glenn Maxwell, Mitchell Marsh, and Marcus Stoinis will bowl the quota of the 5th bowler.

There shouldn’t be any changes in the Aussie line-up and they are expected to go with the same team.

Devon Conway fractured his hand in the last game and is out of this game. Tim Seifert will replace him in the eleven.

The pitch at the Dubai International Stadium will be excellent for batting. Scores of 170+ are expected in this game. Chasing teams will get some help as dew comes into play in the second innings. The Pacers will get some swing with the new ball and spinners too will get some assistance off the wicket. Teams will look to chase as 11 out of 12 night games have been won by the teams chasing in the Super 12 round. 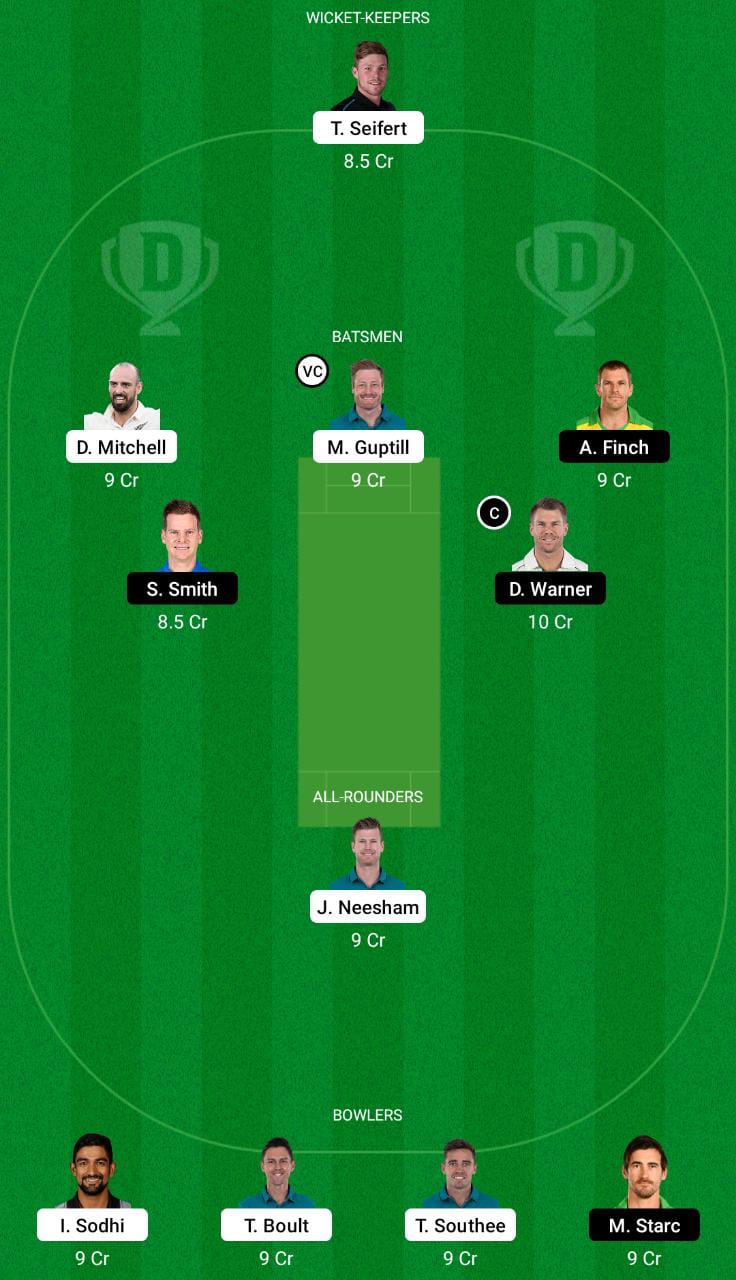