2022 has been nothing but a fairytale for Bangladesh Cricket. Bangladesh was yet to win a game in either New Zealand or South Africa until 2021. Now, they've won a test match in New Zealand and an Odi series in South Africa The Bangladesh Women won their first game in the Women's World Cup. After an historic odi series win, Bangladesh could create history by winning their 1st test in SA. Bangladesh has so far played 6 tests in the rainbow nation and has lost 5 of them by an innings. However, things this time are completely different. SA are without their lead pacers Kagiso Rabada, Ngidi, Jansen  and Anrich Nortje who preferred to play in the IPL instead of the test series. SA are also without Rassie Van der Dussen and Aiden Markram in the batting department.

Keshav Maharaj is the most experienced bowler in the side while Duanne Olivier is the most experienced fast bowler with 13 tests. Glenton Stuurman and Lutho Sipamla have played 4 tests between them while Daryl Du Pavillion and Lizaad Williams are yet to play the longest format. South Africa have a trump card in Simon Harmer. After taking the Kolpak route in 2016, Harmer has been running through sides in county cricket. Durban has aided spin in the recent pas,t playing  two spinners in Durban is very much on cards while Khaya Zondo is apparently set for a debut. Since 2009, SA have won only 1 test in Durban. They have lost to Aus, Eng, SL and drew against NZ. The hosts will take lot of positives from the last series in NZ where opener Saral Erwee scored a 100 in the 2nd test and Wk batter Kyle Verreyne also reached the 3 figures.

Bangladesh will be high on confidence after what they achieved in NZ. Moreover, Head coach Russell Domingo and bowling coach Allan Donald will help them immensly with the local knowledge. SA also had Albie Morkel as a power hitting coach during ODI series while Neil Mckenzie and Ashwell Prince have also worked with the team. 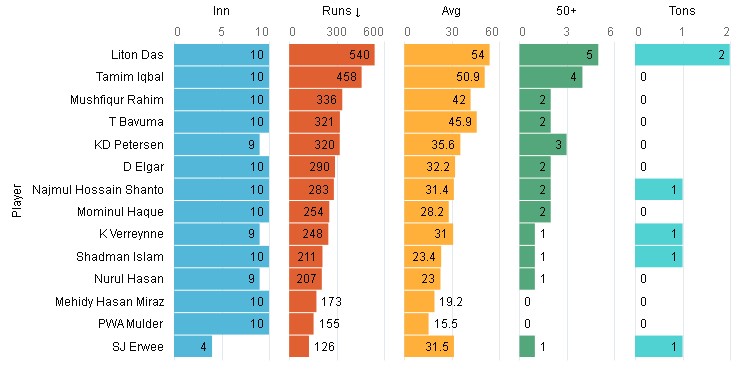 Dean Elgar: The most experienced player in the side with 74 caps, the skipper has a daunting task ahead of him with half of his key players absent from the squad. Elgar scored 330 runs vs Bangladesh last time in 2017 with knocks of 199 and 113.

Keegan Petersen: He was man of the series against India earlier this summer who have arguably one of the best bowling attacks in the world. He missed the bus for NZ series due to Covid,.

Temba Bavuma: Temba had 2 back to back good series against WI and India. He averages 47 from his last 9 tests. Thats the best by a SA batter in that period.

Keshav Maharaj: Maharaj has played 2 tests in Durban and has taken 12 wickets at an SR of 43. He is the most experienced bowler in the side with 40 caps. He has taken 8 wkts from 4 innings vs Bangladesh.

Ebadot Hossain: He was the highest wicket taker in NZ along with Trent Boult

Taskin Ahmed: After a series winning performance in ODIs, Bangladesh would be hoping the same effort from their lead pacer in the longer format. He had a poor outing in NZ where he took only 3 wkts.

Taijul Islam: He has taken 3+ wickets in each of his last 8 innings. 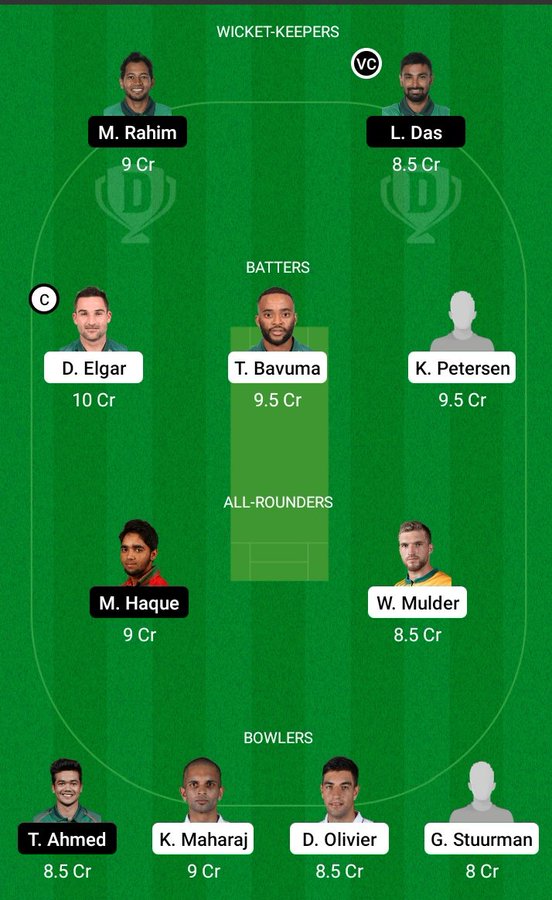