SIMON JONES : THE REVERSE SWING GREAT THAT WAS NOT TO BE

Injuries are an integral threat to a fast bowler’s career. Especially for tearaway quicks, it's always a challenge to maintain their fitness level and avoid the niggles. All the express fast bowlers have been marred by career-threatening injuries. Brett Lee, Shoaib Akhtar, Shane Bond, all of them had injuries that sidelined them for a considerable period in their careers and all of them went on to have a remarkable career. But there was one career which was continuously battling one injury after another and ultimately succumbed after playing only 18 test matches and 8 ODIs.

A career that could have gone on to become a cult status was cut short….

Simon Jones was one of his kind to come out of England where Reverse swing was considered a taboo or aftermath of deliberate alterations done to the ball. When the Pakistani fast bowlers were hooping the ball around the corners in the early 90s, the English cried foul and accused them of ball-tampering. Barring Darren Gough and Craig White, none of the English bowlers would take up this art and master it. Simon Jones burst on to the scene in 2002 against India at Lords. The same test where Sehwag started opening in Tests(and the rest, as they say, is history). He did not play any further part in the series. He went for Ashes series to Australia in 2002 where he played the first test and had his first stroke of misfortune. He got injured on the first morning of the first Test at the Gabba after bowling just 7 overs and getting rid of Justin Langer. He ruptured an anterior cruciate ligament while sliding to field a ball.

He toured the Caribbean in March 2004 and got his first five-fer in Port of Spain and was the member of the team for the subsequent English summer of 2004 against New Zealand and West Indies. He then toured South Africa and Zimbabwe where he made his ODI debut.

The summer of 2005 marked the union of arguably the greatest English pace attack to have dawned the 3 lions. Simon Jones, Steven Harmison, Freddie Flintoff, and Mathew Hoggard accompanied by Ashley Giles, formed the bowling attack that took on the greatest team in the history of the game.

Bangladesh was the first team to tour England that summer and was blown away by the pace quartet.
Then came the mighty Australians. This Ashes tour was sort of different in the sense that England had last won the ashes in 1986- 87 tour of Australia and had been completely steamrolled in the 2 decades that were to follow.

But this team under Michael Vaughan looked different than previous English sides. The pace attack had variety with 3 of the 4 pacemen capable of hitting 90+ MPH regularly. Kevin Pietersen brought a fearless attitude to take on the likes of  Mcgrath, Gillespie, Lee, and Warne. The battle lines had been drawn so what made Simon Jones such a trump card in this English Ashes Triumph??

His brisk pace and his ability to swing the oldest possible ball under the circumstances was one of his endearing qualities. He could swing the ball late, ask Michael Clarke who was set up by Jones brilliantly at Old Trafford. The variety of the English attack was also a key contributor with Harmison and Flintoff hitting the deck all day long at a good pace and Hoggard making life really difficult for the Aussie top order with the new ball. Ashley Giles would keep one end tied up which gave Jones ample opportunity to set up the batsmen.

The first test at Lords was not as auspicious as Jones was hoping and he returned with figures of 2 for 48 and 1 for 69 and England lost the test by 239 runs.
The second test at Edgbaston marked the resurgence of the English team as Jones returned with the figures of 2/69 and 1/23 where he contributed with the bat as well. England won the thrilling test by 2 runs. 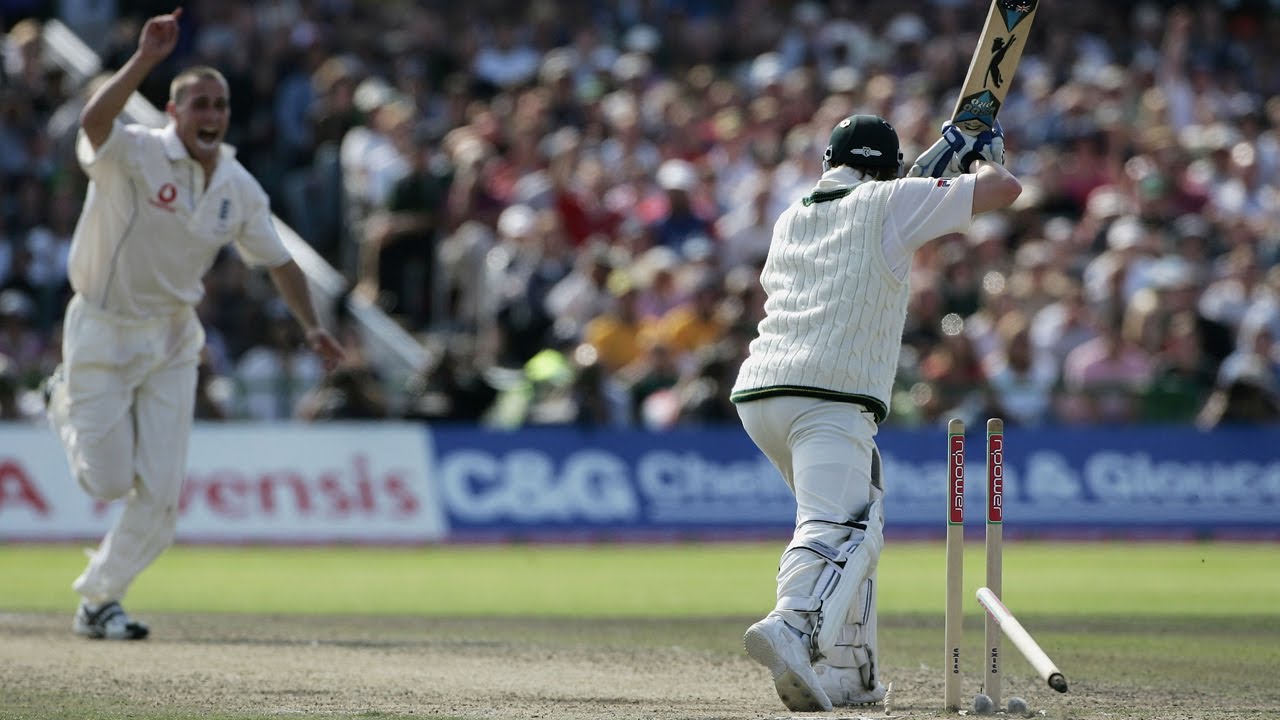 The 3rd test at Old Trafford saw the culmination of Jones as a test bowler. He got his career-best figures of 6 for 53 and helped England get crucial first-innings lead. However, the visual delight was saved by Jones for the second innings, brilliantly setting up Michael Clarke with a delivery that tailed very late which Clarke was shouldering arms to. The ball started way outside off stump and changed its course very late fooling Clarke into believing that it was going outside the off stump. This late movement has counted for so many batsmen ever since the advent of reverse swing. Although the Test was drawn, England was the happier camp with a lot of positives and the ashes still alive after 3 tests. This was not the trend for Ashes in the last 18 years barring one or two exceptions.

The fourth test at Trent Bridge saw Jones at his devastating best in the 1st innings returning with figures of 5 for 43 remarkably trapping Ricky Ponting on the crease with a sharp in ducker. As fate would have it Jones injured his ankle 4 overs into the second innings. That brought an end to his Ashes 2005 with 18 wickets at an average of 21 in 4 tests. As it turned out this was the last test of his career as he was unfit to play the last Test at The Oval.

In a test career spanning just over 3 years and 18 Tests, he showed glimpses of what he could have become had it not been for injuries but still that summer of 2005 is synonymous with Simon Jones and the art of reverse swing bowling.