Test cricket was back last month with SL defeating Bangladesh in a thriller and entire summer has plenty of exciting Tests scheduled in this WTC Cycle. "A new look" England is set to take on NZ in a 3 match Test series at home. England have been handed 3 consecutive series defeats in last 3 years. The WTC champions are currently 6th on the points table. They had a promising start in this cycle with a well fought draw in Kanpur but lost the series 1-0. Bangladesh created history by winning their 1st ever test in NZ and SA maintained their record of not losing a series to NZ in whites. The problems don't end here for the Kiwis. Henry Nicholls is set to miss the 1st test test and Kane Williamson has been battling an injured elbow.

Ashes loss was a saturating point. England’s head coach, batting and bowling coach, ECB’s managing director, their Chairman, everyone resigned and it was common knowledge that Root’s days as England’s captain were numbered and a series loss in West Indies put a final stamp on his exit. "The red ball reset" did not work out in favour of Eng as the rot runs much deeper  and dropping your 2 most experienced bowlers was the last solution. Broad and Anderson are back, Ollie Pope is your new no 3 and the new skipper has demoted himself to 6. Engs pace battery has been crippled with injuries. Jofra Archer has been ruled out of the summer, Robinson, Wood, Stone, Woakes all are unavailable for this series. Matthew Potts will be making his Test debut

Joe Root: The ICC test cricketer of the year had one of the greatest calender years a batter could wish for. He ammassed 2066 runs since 2021 with an average of 54.36 and breaking the all-time record of Sir Vivian Richards with most top-scores for the team in a calendar year. What makes his achievement even more special is the 2nd highest run scorer in the side was Rory Burns with 550 odd runs. There was a staggering difference between the 1st and the 2nd best batter.

Devon Conway: Since his debut, Conway has set the international stage on fire in all 3 formats as well as in the recently held IPL. He made his debut on the same venue last year and scored a scintillating 200. He averages 63 in test cricket so far with 3 100s.

Kyle Jameison: He had a dream start to his test career where he scalped 46 wkts in his first 8 test matches. Since then he went through a dry patch against Bangladesh at home but was back among wkts against SA. He is also very good with the bat down the order.

Ben Stokes: He was Eng's best bowler in the Carribean and bowled marathon spells in almost every innings. Cricviz rated those pitches as the 2nd most batting friendly wkts in WI since 2005. With a new added responsibility and a good outing in County, we could see Stokes 2.0 from this series. 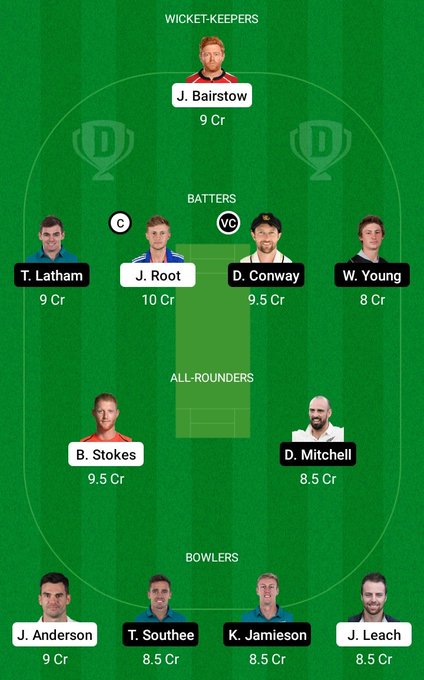