It has been nothing but a fairy tale for Bangladesh cricket since 2022. Until 2021, Bangladesh hadn't won a single match in either New Zealand or South Africa. Now, they've won a test in NZ and an Odi in SA. They recovered from 45-6 in an ODI to win against Afghanistan. Bangladesh women's team won their first game in Women's WC by beating Pak Womens team. Ban registered their first win in the rainbow nation by 38 runs against the hosts who had just whitewashed India 3-0.

Bangladesh showcased a timid and a conservative approach at the start o the innings when the put up only 46 runs in the first 15 overs. However, with the help of some quickfire innings  from Shakib al Hasan and Yaser Ali the visitors managed to post 315 on the board. They were well supported by cameos from Mahmudullah, Afif and Mehidiy at the back end of the innings hich helped Ban to score 180 runs in the last 20 overs. Lungi Ngidi was the most expensive bowler has he gave 75 runs from his quota of 10 overs. Keshav Maharaj was once again their best bowler just like he was during the series against India. Since 2020 he has picked 18 wkts at an economy of 4.56.

SA's innings had the worst posible start as they were reduced to 36/3. Rassie Van der Dussen stitched 2 partnerships. First with Temba Bavuma an then with David Miller. This was his 11th half century in just 27 innings. The stage was set for David Miller atfter Bavuma's dismissal and he wasted no time in going after Shakib and Mehediy. He is the only batter with over 3000 runs to average 40+ and Strike at 100+ batting at 5 or below. Req RR was fast climbing and Phehlukwayo's innings sucked the whole momentum out of the chase. Bangladesh displayed a brilliant performance in the field as they kept taking blinders one after the other.

SA heavily missed the services of their prolific opener Quinton de Kock. Going into the 2nd Odi they could replace Andile with Pretorius who is a better bowler at the death and a finisher at 7. Wanderer's has been a lucky venue for the hosts. They have lost only 2 pink day Odis here. Overall they have won 27 an lost 10 odis. 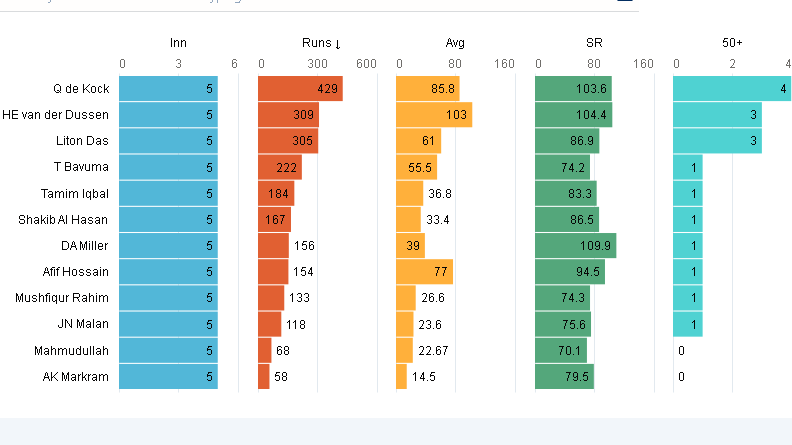 Quinton De Kock: Undoubtedly one of the best ODI openers of this generation. QDK became the 6th fastest batter in terms of innings (127) to get to 17 ODI 100s. He averages 59 against the visitors in just 7 innings with 354 runs and one 1 100. Has registered 2 100s in his last 2 ODI series. He was a major missing at the top of the order as SA crumbled to 36/3.

Rassie Van der Dussen: Only Imam ul Haq had more runs after 27 odi innings. RVD has the best average 75.17 and the joint 2nd most 50+ after that many innings.

Janeman Malan:He had a dream start to his ODI career and was rightly nominated for ODI player of the Year award by ICC. His ODI career average is 63.58 in 14 innings which includes 3 centuries and 3 half centuries and an unbeaten 177 against Ireland.

Kagiso Rabada: KG had a memorable debut against Bangladesh in 2015 where he took a hattrick on debut. With 13 wkts in 7 innings at an eco rate of less than 5, he has an impressive record again

Mushfiqur Rahim: The former captain is turning out to be one of the best middle overs batter. Since 2019, he is averaging over 49 in this format with  2 100s and 9 50s. He scored 110* at Kimberley in 2017 when Bangladesh last toured SA

Shoriful Islam: He played a major part in Bangladesh winning the u 19 wc in SA in 2020 where he picked 9 wkts in 6 games. He struck 2 major blows by removing the dangerous Janeman Malan and then Temba Bavuma which broke a partnership that was set and could have taken the game away from them.

Shakib Al Hasan: Shakib delivered a performance for the ages in 2019 WC. But since then, his career has gone only south because of numerous off the field issues. He is the most experienced player in the side and his last minute availability must have boosted the Bangladesh side. At Centurion, Shakib was back at his best as he delivered a match winning performance of 77 with the bat

Shakib Al Hasan is a different beast outside home at 3 in ODIs. 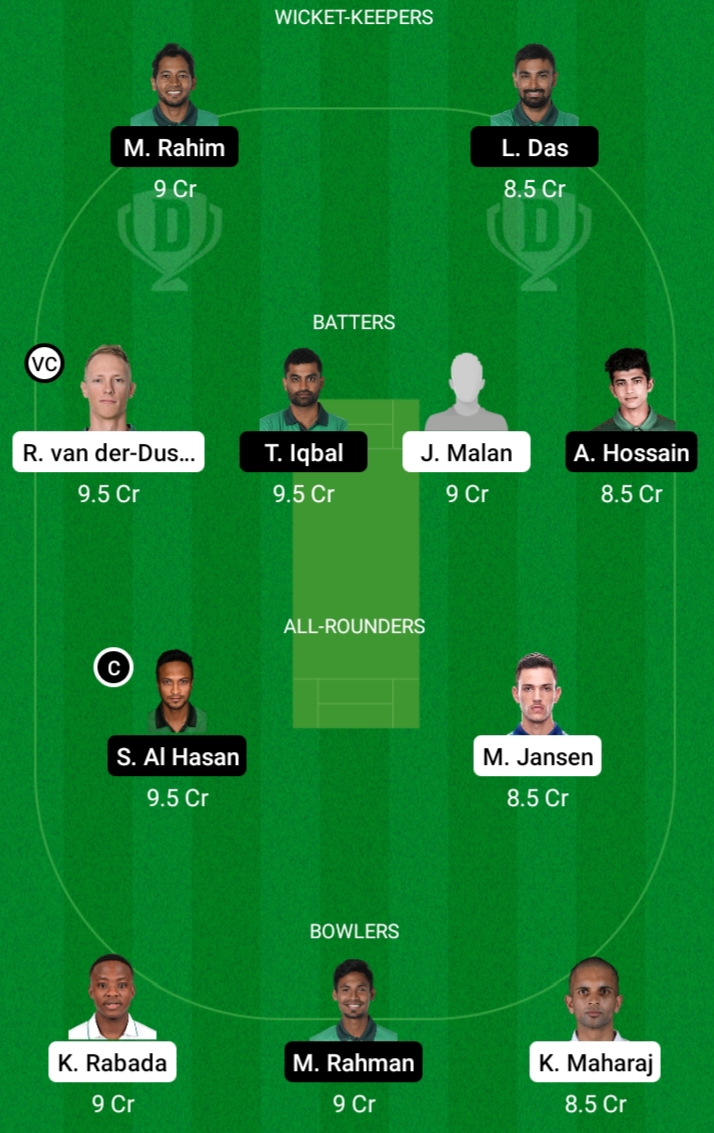