The Kolkata Knight Riders take on Rajasthan Royals in match no 30 at the Brabourne Stadium in Mumbai.

After winning 4 out of the 1st 3 games, KKR suffered a blip against DC and SRH in their last 2 encounters. Batting has been a major let down so far for with no contributions from the top order of Rahane, V Iyer, S Iyer and Nitish Rana apart from one individual pereformance in 5-6 games. They have lost 12 wkts in the Powerplay and have not crossed 50 since that opening game against CSK.  Add to that, there has been a stark contrast between their performance with the ball in the powerplay and at the death. Pat Cummins has conceded 140 runs in the 11 overs bowled, Varun Chakravarty had conceded runs at an eco of 10  only once in 35 matches before conceding it in consecutive games against DC & SRH. Sunil Narine is a lone bright spot in the bowling with an economy of 5 in 6 games. The spin duo of Ashwin & Chahal has been RR's biggest strength in the middle overs. Yuzi has picked up 11 wkts whereas Ashwin has an eco of 7.6 after bowling 15 overs. Almost every KKR batter has a an outstanding record against the duo and its going to be an exciting contest in the middle overs.

Jos Buttler nos's in PP since 2018 are 2nd to none. No one has scored more runs at a better SR than him. Similarly, in middle overs, Sanju has scored 1163 runs at a SR of 146 in this period and only Rishabh Pant has a SR in excess of 140. Shimron Hetmyer has the most runs and sixes in death overs since 2021. RR have all 3 phases covered but they lack batting depth and firepower at the top to partner Buttler. Trent Boult should be available for today's game, he has 30 wkts in Powerplay since 2018 and is one of the most lethal bowlers with the new ball.

17 IPL games have been played at Brabourne.
Teams batting 1st have won  9/17 games.

Shreyas Iyer: Since Nov 2019, Iyer has scored 705 runs for India at a SR of 150. He has performed in almost every series and was the man of the series against SL 2 months ago. He has failed to make any impact so far in this year's IPL apart from a half century against Delhi in the last game.

Andre Russell: The 2 time MVP of the IPL was quiet with the bat in the past 2 seasons but he displayed a scintillating show of power hitting against PBKS and yet again proved why he is one of the most dangerous players in t20 cricket. He scored 49 in the last game and is also contributing with the ball in every game. Since 2018, Russell strikes at 225 at the death with 59 sixes.

Jos Buttler: Since 2018, Butler strikes at 149.1 in the Powerplay with 780 runs. Regarded as one of the most dangerous white ball batters in the world, he had a brilliant t20 wc where he scored a scintillating 100 against SL on a slow Sharjah Pitch and carried his form in the IPL where he scored another 100 in his 2nd game of the season, a 70 odd in the game vs RCB and a quickfire 50 in the powerplay in the last game.

Prasidh Krishna: Players have been outstanding against their previous teams in this season. The pattern is uncanny and it won't be a surprise if Prasidh Krishna runs through KKR's line up which is a little fragile against fast bowling.

KKR are favourites to win the game and Narine's spell will once again be the difference between the 2 sides. 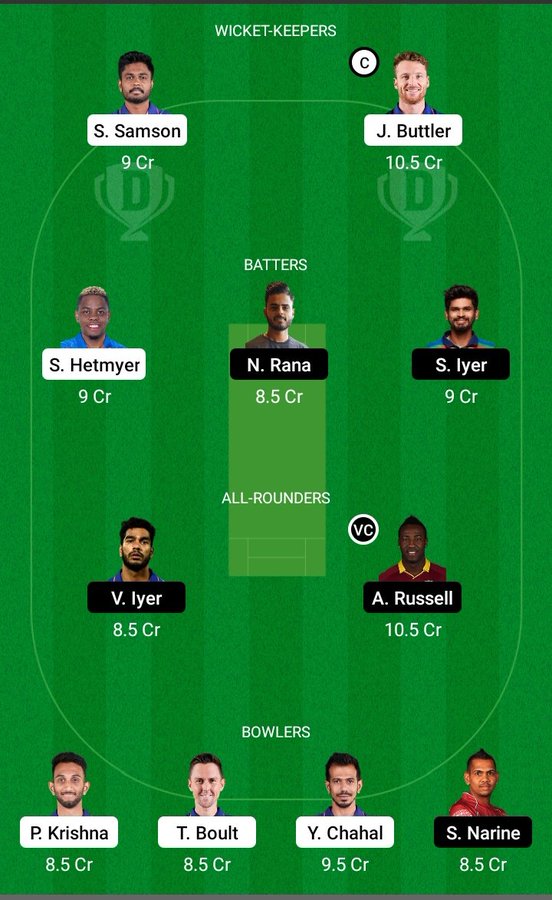