The Delhi Capitals take on the Punjab Kings in match no 32 at the Brabourne stadium. As expected, Covid has risen his head and the first camp to be affected was Delhi Capitals, with trainer Patrick Farhat and all-rounder Mitchell Marsh testing positive. 5 more players are supposed to be tested positive for Covid and that was a major factor DC decided not to travel to Pune and the match was scheduled at the Brabourne Stadium.

DC had a promising start to their campaign by pulling off an improbable chase against MI in their opening encounter. Their season didn't take off as expected and they find themselves on no 8 at the points table with 4 points. Khaleel Ahmed and Kuldeep Yadav have been the unexpected performers with the ball. At the same time, Axar Patel has gone wkt less in 1st 4 games and Thakur has picked up just 4 wkts at an eco of 9.5. DC have picked up only 7 wkts so far in the death overs at a RR of 11.3. Mitchell Marsh's untimely injury, recovery and now Covid has had a major impact on DC's team balance. Marsh was supposed to bat at 3, he has found immense success at the position for his national team and in the BBL in last one and a half year.

Punjab Kings are coming off a a forgettable loss against SRH in the last game where they collapsed from 151-5 to 151 all out a blink of an eye. Liam Livingstone and Vidharba's star player Jitesh Sharma are the only bright spots in the middle order. Liam has 3 50s in his last 4 innings and Jitesh has scored 90 runs at a SR of 176. PBKS have lost 24 wkts in the middle overs which is most for any team. On the contrary, their scoring rate is 9.81 in the PP and 2nd best is of DC. Punjab have the luxury to try and change the lineup given the squad they have. Rishi Dhawan & Benny Howell should get a look in the 11 at the earliest.

18 IPL games have been played at Brabourne.
Teams batting 1st have won  10/18 games.

Liam Livingstone: He had a tough outing last year with an average of just over 8 in 5 games. Liam was the highest scorer in The Hundred with 348 runs. He scored England's fastest ever international century when he reached the milestone from just 42 balls against Pakistan at Trent Bridge. With 60(32) and 2 wkts against CSK, a quickfire 60 against GT and another solo show in the last game against SRH proves he has really arrived and its just a glimpse of what we are going to witness. He has 3 50s  which is the most as a middle order batter

Prithvi Shaw: What makes Shaw different from the current crop of openers? Since Shaw’s IPL debut in 2018, he has scored 1041 runs in the Powerplay at a whopping SR of 148.3 No one has scored more runs than him at a better SR. The next best on this list is Jos Butler with 826 runs at an SR of 150. Shaw already has 2 half centuries in this season.

David Warner: One of the most consistent batters in the history of the league. Warner has marked his presence in this season with 2 back to back half centuries. Shaw & Warner are one of the most lethal opening pairs of the tournament. DC have the 2nd  highest scoring rate in the powerplay with 8.9.

Kuldeep Yadav: He has scalped 11 wkts in 5 games.

Jonny Bairstow: He hasn't set the IPL on fire so far and its just a matter of time he turns up on the big stage. He is the 4th fastest to 1000 IPL runs and his IPL SR is 140 after 31 games.

Prediction: Punjab looking favourites and Arshdeep's spell will decide the course of the game. 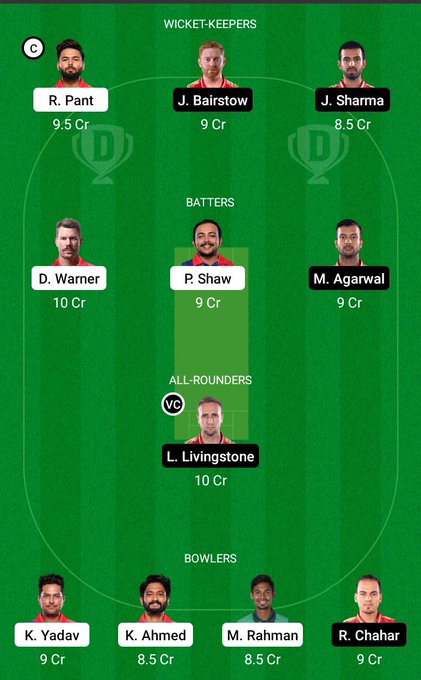