SRH's campaign had a shaky start as they lost their 1st 2 opening games but have fought back brilliantly to win their last 3 games against CSK, GT & KKR. Bowling has been their biggest strength as they managed to restrict CSK & GT for a modest total. Natarajan has found his rythm back after missing out in the least season. He has picked up 11 wickets so far and has been brilliant at the death. Umran Malik's performance is only taking an upward graph game after game and he displayed a masterclass against KKR with those overs against Shreyas & Russell. Tripathi has started from where he left last season and has a SR of 177 in the season so far. SRH have been dealt with a massive blow as  Sundar got injured in the game against GT, his absence misbalances the side and the men in orange are short of a spinner who has done amazingly well in the Powerplay.

The Punjab Kings campaign  started with a bang by chasing 205 v RCB, defended a modest total according to Brabourne standards against CSK and lost to GT by conceding 2 sixes in last 2 balls and handed MI their 5th consecutive loss in the last game. Liam Livingstone has been their biggest star so far with 162 runs at a SR of 190. Before the tournament, Mayank and Dhawan were considered one of the best opening partnerships, but they didn't do well in the PP so far. Things changed against MI and they managed an opening stand of 97. Death bowling, especially Arshadeep Singh, is another area where Punjab should be credited

Rahul Tripathi: Tripathi burst onto the scene in 2017 while opening for Rising Pune Supergiant. He racked up 391 runs at an impressive strike rate of 146. He had a a couple of off seasons with RR but was back at his best in KKR. Donning a new role, Tripathi batted in middle order and amassed 397 runs at a SR of 140. No wonder he fetched 8.5 crores in the auctions as he possesses the unique ability to attack from ball one.He was the top scorer in the 2nd game with a 30 ball 44 and hit a 15 ball 39 against Chennai and followed it up with a 37 ball 71 while chasing. Tripathi has the 5th best SR (145) since 2020 for batters with minimum of 450 runs

Liam Livingstone: He had a tough outing last year with an average of just over 8 in 5 games. Liam was the highest scorer in The Hundred with 348 runs. He scored England's fastest ever international century when he reached the milestone from just 42 balls against Pakistan at Trent Bridge. With 60(32) and 2 wkts against CSK plus another quickfire 60 against GT proves he has really arrived and its just a glimpse of what we are going to witness.

Aiden Markram: In the past one year, Markram has scored 570 runs for SA at a SR of 148. He had a very good outing in t20 wc and was featured in ICC's team of the tournament. Markram is also a useful part time off spinner and does the job well in Powerplay. He was the top scorer for SRH in the 1st game and scored a 50, registered his 2nd one in the last game against KKR.

Abhishek Sharma: The young southpaw was the top scorer in the chase against CSK with 75, repeated with a 32 ball 42 against GT and proved why SRH went onto aggresively bid for him during the auctions

T Natarajan: He has picked 11 wickets from 5 games at an economy of 8.5

Nicholas Pooran: Last year was a horror outing for the southpaw from Trinidad. This year he has looked in a good shape and contributed in couple of innings. We predicted Mayank Agarwal as a pick in our preview of MI v PBKS, it wont be a bad idea to take a punt on Mayank again.

Prediction: Punjab Kings will emerge victorious and Livingstone will play another blinder. 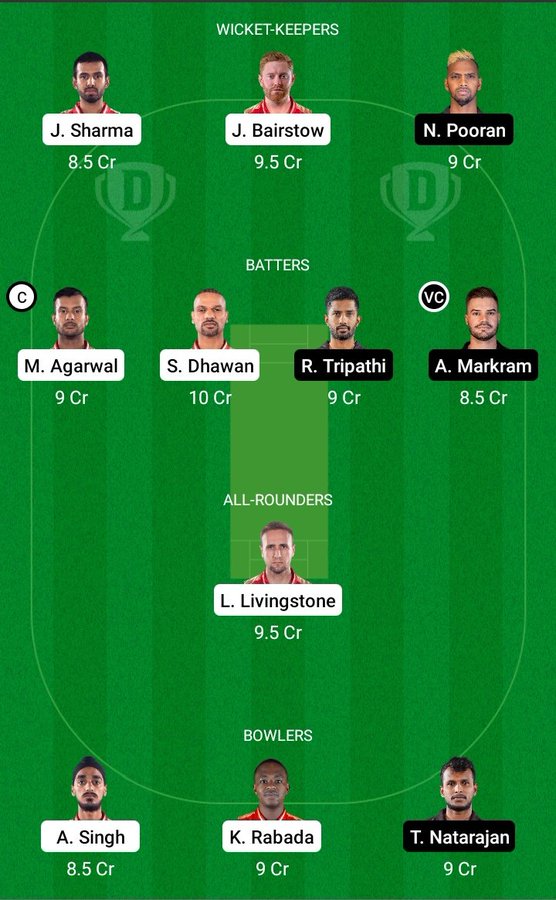