Will MI finally break the shackles and register their 1st win this season ? A question which is on every cricket lover's lips these days. 2008, 2014, 2015 and now 2022. Losing 1st 4/5 matches wasn't a new thing for MI. They even won the championship in 2015, made it to playoffs in 2014 and missed out narrowly in 2008. But things are diff this time. MI has become the 1st team to lose their 1st 8 games and In a 10 team tournament its quite difficult to seal your spot in top 4 and this MI side is weak on many fronts. What has been more bizarre from MI is their selections and playing 11 combinations in the 1st few games. They benched Tim David  after one failure who they aggresively pursued in the auctions and went with just 2 Overseas players against RCB. MI most probabaly lost this season at the auctions and spending 8 cr on Jofra Archer who wasn't going to take part this year has proved costly. After continous failures, the team tried the likes of Fabian Allen, Riley Meridith  but had to drop the former after 1 game. Perhaps, the biggest disappointment of the tournament has been the opening duo of Rohit & Kishan. This was the season Rohit had to step up being the most seniormost batter in the side. Ishan now has registered 6 consecutive low scores. MI have the worst death bowling rate in the tournament (12.64)

Powerpacked performances from Jos Buttler followed by magical spells of spin duo of Ravi Ashwin & Yuzvendra Chahal is the story of every RR game in this season.  Buttler has 3 100s and is the top scorer with 499 runs at a SR of 159.4. Powerplay has been RR's biggest strength so far. Jos Buttler alone has hit 16 of the 21 sixes in the 1st six overs. Since 2018, he has the best SR in this period. Death Overs is singlehandedly taken care by Shimron Hetmyrer who has scored the most runs and sixes in this period from 2021. In 2022, he has scored 153 runs at a SR of 246. So far, RR's other woes in opening and end overs have been overshadowed because of the brilliance of these 2 individuals. RR will be boosted by Riyan Parag's form in the last game and their new pace sensation Kuldeep Sen.

Jos Buttler: Since 2018, Butler strikes at 148.5 in the Powerplay with 860 runs. Regarded as one of the most dangerous white ball batters in the world, he had a brilliant t20 wc where he scored a scintillating 100 against SL on a slow Sharjah Pitch and carried his form in the IPL where he scored another 100 in his 2nd game of the season, a 70 odd in the game vs RCB and a quickfire 50 in the powerplay against GT, and another 2 100s against KKR & DC. He is now the orange cap holder with 499 runs. Buttler averages 80 and strikes at 161 against MI.

Yuzvendra Chahal: Purple cap holder with 18 wkts at an eco of  7.1. The spin duo of Ashwin & Chahal have been RR's biggest strength in the middle overs. Chahal has taken 13 wkts in the middle overs,  behind Kuldeep who has scalped 17 wkts. RR have been using him wisely by bowling his 2 overs after the 14th over. He bowled brilliantly in the 18th over of last few games.

Suryakumar Yadav: MI missed a stable middle order batter in the 1st 2 games and were boosted by the addition of Sky in the  match against KKR. He is a vital cog in this MI line up and has produced 3 consecutive 400+ seasons from 2018-20. 52(36) v KKR, 68(37) v RCB and almost a match winning knock of 43(30), followed by a couple of 30s are his last 6 outings since comeback from injury.

The southpaw from Hyderabad was a member of India’s U19 World Cup in 2020. He was picked by MI at 1.7 crores after facing a little competition from SRH, CSK and RR. His last outings in VHT and SMAT are one of the major reasons why so many franchises raised the paddle for him. He scored 215 runs in SMAT at a strike rate of 147. Tilak Verma became the youngest batter for MI to score a half century in the last match against RR and followed it up with a 38 against KKR. He again lauched a quickfire attack against Punjab with 36 off 20 balls but was unfortunate to get run out. He was the top scorer in game against CSK with 51and ended with another 38 against LSG in the last game.

Trent Boult: He has taken most wkts in PP since 2020. Could cause early problems for the opening pair of  Mumbai with his swing.

Prediction: MI to open their account and Surya Kumar Yadav will once again top score for MI. 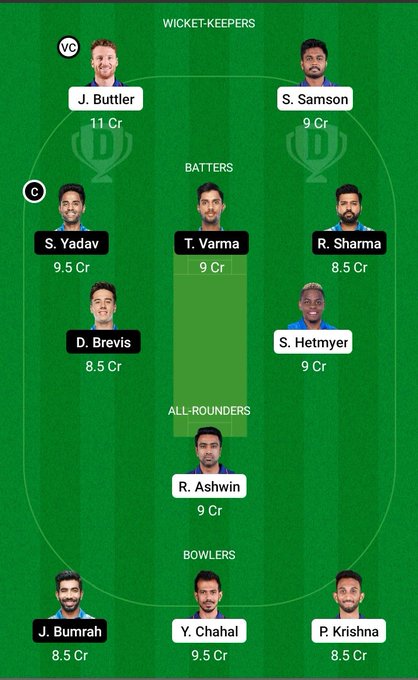 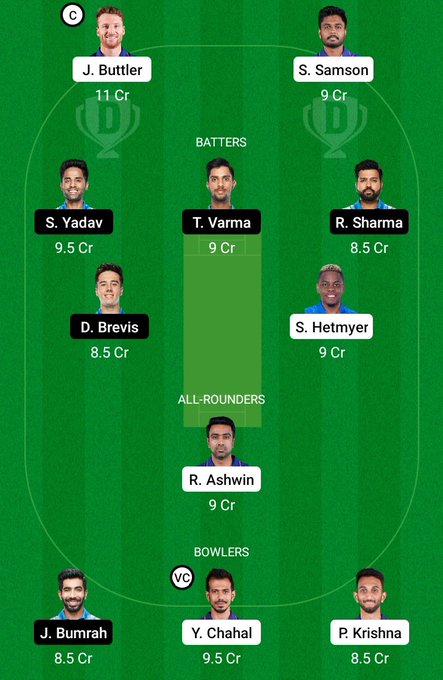