The stage was set in Mohali as one of the world's most celebrated cricketers of this geneartion played his 100th Test against Sri Lanka. Virat Kohli became the 12th Indian and overall the "71st" cricketer to join this illustrious list. The occasion also marked Rohit Sharma's 1st Test as a captain and he led India to a thumping victory as they defeated Sri Lanka by an innings and 222 runs in only three days to take a 1-0 lead in the series.

Batting first, India had a blow hot blow cold start as both openers who average in the 80s at home couldn't capitalize on the starts they got. Hanuma Vihari who was playing his just 2nd Test at home was promoted to no. 3 and scored a good 58 before throwing his wicket. All eyes were on Virat Kohli as the crowd had specifically come to watch him. Kohli again fell to a left arm spinner on 45. This was his 6th dismissal against a left arm spinner across formats since December 2020. Rishabh Pant did what he does every time, scored almost run a ball before falling to Suranga Lakmal on 96. This was the 5th time he was dismisssed in the 90s in Test cricket. But the real hero was the new no. 1 ranked all rounder in ICC rankings- Ravindra Jadeja. India were in a tricky situation at 228-5, Jadeja who was returning to the Test side after a long break due to injury registered his highest ever Test score 175*. There was a good chance for him to add another 25 runs but it was later revealed it was his own choice to declare the innings,

Sri Lanka's morning started on the wrong note as they lost an important toss on a batting track. To add to their agony they picked an extra pacer in place of left arm spinner Jayawickrema. Indian batters made the SL's bowling look toothless after being 5 down after tea on Day 1. Pathum Nissanka was the lone bright spot as he registered his 3rd half century in his last 4 innings. Jadeja once again weaved his magic with the ball as he took a yet another 5-wicket haul and joined the elite company of all rounders to score a 100 and take 5 wickets in the same test. SL showed some grit in the 2nd innings but were once again blown away after the dismissals of Mathews and de Silva.

Going into the Pink ball test, they have been dealt with another blow. Pathum Nissanka misses out due to injury and Chameera will be rested to manage his workload. India will be boosted by the return of Axar Patel who took 11 wickets in the last Day/Night Test India played. Virat Kohli is India's highest run scorer in D/N matches.

Hanuma Vihari: The FC giant has played only couple of Test in India since his debut in 2018. In and out of the side, constantly fighting for his spot, this could be his moment to seal that no. 3 spot. Vihari was ignored for New Zealand series and then drafted on A tour to South Africa. He came in for Kohli in the 2nd Test at Johannesburg where he scored a gritty 40* and followed it up with a 58 in the last Test at his new position

Ravindra Jadeja: The all-rounder produced his best ever innings in Test cricket by scoring 175*. This was the highest score by an Indian batsman batting at no 7 or below. He also scalped 9 wickets. Since 2017, Jadeja is averaging 58.13 at home with the bat. The average further shoots up to 84.83 if we consider the last 3 years.

Mayank Agarwal: Lost his place in Australia and then in England before 1st Test, Mayank came back strong with a 100 against New Zealand. With KL Rahul and Priyank Panchal in the mix, the opening spot is becoming more competetive. Mayank averages a mamoth 79.27 at home in 11 innings with 4 hundreds. Rohit at the other end, averages 71.53 at home with 7 tons. Thus making them one of the deadliest opening pair in Tests at home.

Dimuth Karunaratne: The Sri Lanka captain had a memorable 2021 as he was nominated for ICC's Test Cricketer of the Year award and was also named in the ICC Test Team of the Year. He ammased over 900 runs with 4 centuries. He is their 2nd most experienced batsman in the side with 74 Tests and is averaging over 44 in last 5 years which includes 9 tons. He will partner Lahiru Thirimanne who scored 2 100s in his last 2 test series.

Dhananjaya de Silva: One of the positives from Sri Lanka's last tour to India was DDS' knock of 119*. He is one of the pillars of Lankan batting in the middle order and is averaging just a notch below 40. He has taken his batting on another level in past 3 years. He is averaging 45 in his last 18 tests with 4 hundreds and 4 fifties.

Lasith Embuldeniya: It's likely he will be the lone spinner as SL would look to go with 3 pacers in the Day/Night Test. He got the big fish Virat Kohli in the last game and was the only bowler who looked threatening. He has an uphill task ahead of him against a batting line up of Rohit, Mayank and Pant who are one of the best players of spin and have shown no mercy on any visiting spinner with their attacking game. 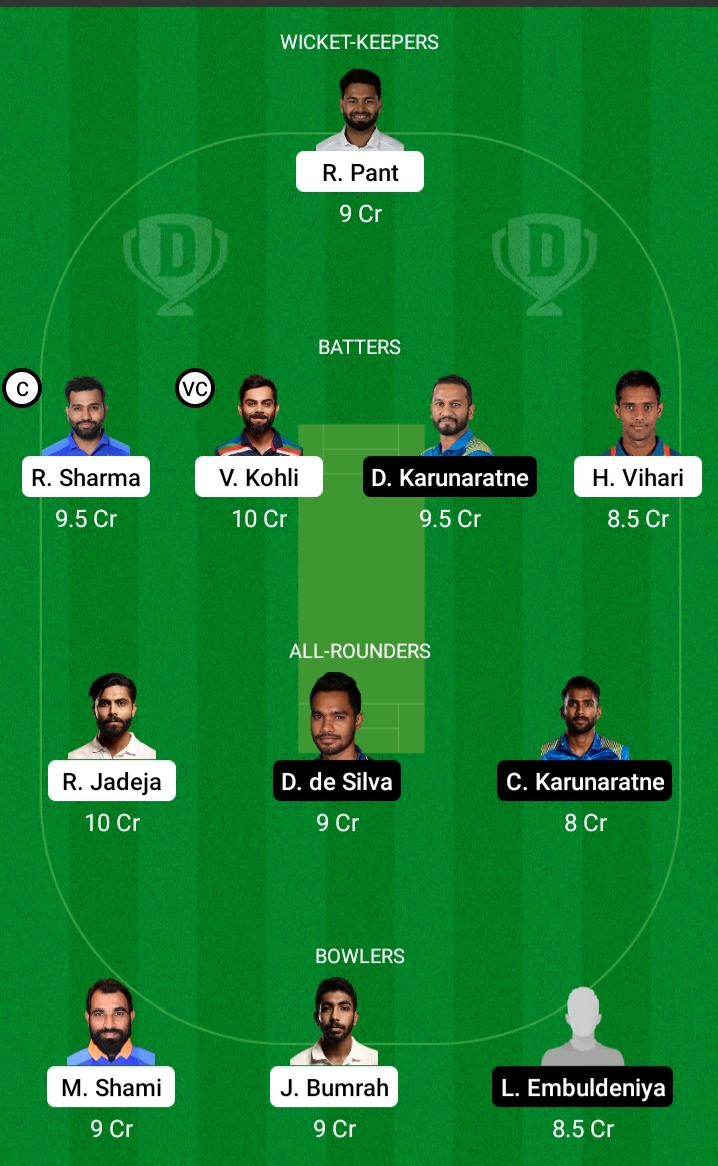