The Kolkata Knight riders take on the Mumbai Indians in match no 14 of the 2022 IPL at the MCA stadium in Pune.

KKR so far are off to a decent campaign compared to thEIR opponents who have lost both of their opening games. KKR have  have been brilliant with the ball. They restricted CSK around 130, kept PBSK under 140 and gave RCB a run for their money while defending 129. Umesh Yadav has been a star in the Powerplay with 5 wickets. Umesh, Narine and Varun have dot % of 67, 50 and 50 respectively. Andre Russell coming back to form is a huge boost for them. Bowling will be strenghthened by the addition of Pat Cummins. It would be very interesting to see if KKR drop Tim Southee for Cummins or accomodate both of them by dropping Sam Billings which is highly unlikely. KKR could also give fast bowling sensation Aman Khan a look in the 11. He was seen destroying Stumps of KKR batters in the nets.

Losing initial games is not a new thing for MI. 2014,15,18 many seasons they have lost their opening 2-3 games and went onto win the trophy. But this MI side is different from those sides. They lack experience in bowling apart from Bumrah, their middle order is yet to fire and unavailability of SuryaKumar Yadav has made things more difficult for them. Tilak Verma became the youngest batter to score a 50 for MI, Ishan Kishan has provided good starts in the 1st 2 games. These are some of the bright spots for the 5 time champions. MI could get make few changes in the upcoming games. Meredith, Fabian Allen, Dewald Brevis could get a look in the 11 ahead of Daniel Sams

There is still uncertainity over SuryaKumar Yadav's availability.

Pat Cummins is available for today's game and Aaron Finch will be available from 10th April.

Rohit Sharma: KKR are Rohit's favourite opponents. He has scored 1015 runs at an avearge of 46 and a sr of 132 against them, which inckudes 6 half centuries and a 100. He has a good record against Umesh who has been providing consistent breakthroughs in the Powerplay.

Jasprit Bumrah:  With 133wkts at an eco of 7.4 he is one of the best fast bowlers in the tournament. His nos at the death are 2nd to none and very few batters have manged to play him in that phase of the game. This was pretty evident in the last game as MI managed to restrict RR below 200 because of his spell.

Andre Russell: The 2 time MVP of the IPL was quiet with the bat in the past 2 seasons but he displayed a scintillating show of power hitting against PBKS in the last game and yet again proved why he is one of the most dangerous players in t20 cricket.  Russell strikes at 229 at the death since 2018. A fit Russell adds immense value to the KKR side as he bowls his quota of 4 overs as well

Umesh Yadav: Since 2018, Umesh Yadav has taken 23 wickets in the Powerplay, 3rd most after Chahar and Boult. He is currently the purple cap holder with 8 wkts.

The southpaw from Hyderabad was a member of India’s U19 World Cup in 2020. He was picked by MI at 1.7 crores after facing a little competition from SRH, CSK and RR. His last outings in VHT and SMAT are one of the major reasons why so many franchises raised the paddle for him. He scored 215 runs in SMAT at a strike rate of 147. Tilak Verma became the youngest batter for MI to score a half century in the last match against RR.

Varun Chakravarty: He has been a revelation and is one of the major reasons for KKR's success in the last 2 editions. 37 wickets at an economy of 6.6 and dot ball % of 37 are highly impressive nos for a spinner.

Ishan Kishan doesn't have a good record against any KKR bowler. With the kind of form he is in this season, it may well be a good oppportunity for him to rectify those head to head records. 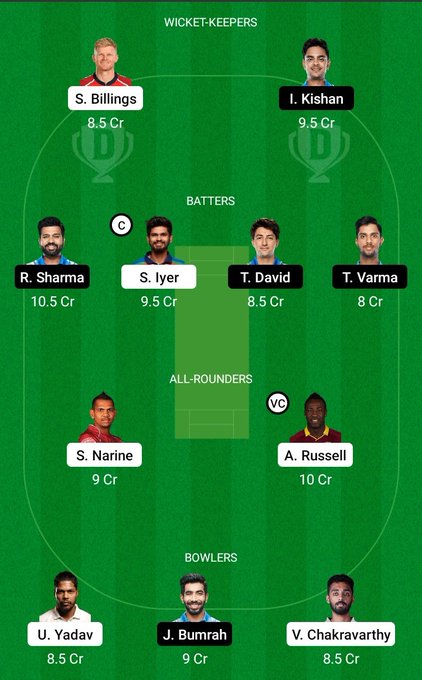 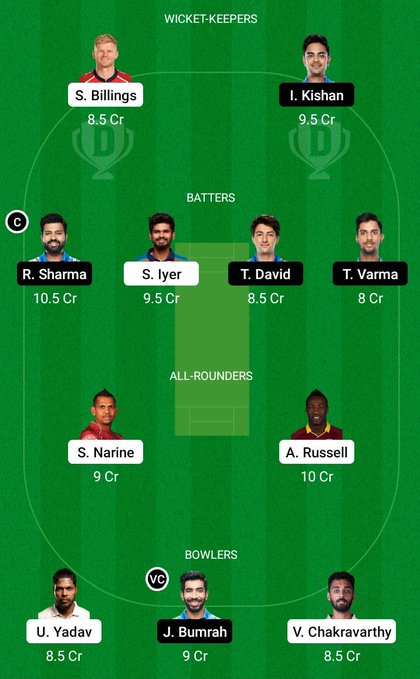