The Sunrisers Hyderabad take on the Gujarat Titans in match no. 21 at the DY Patil Stadium in Navi Mumbai.

Can the 2016 Champions put a halt on Gujarat's winnining streak who have won 3 out of their first 3 games? The new entrants are the only undefeated team so far in the tournament. It has been a complete team effort with Tewatia winning 2 games with the bat in the end overs, Shubhman Gill's back to back scores of 84 & 96, Shami and Lockie blowing away the opposition with swing & pace and Hardik Pandya chipping in with his 4 overs and adding to the team balance. Gujarat have also shown urgency in team changes as they dropped Vijay Shankar and gave Sai Sudarshan a go at no 3. Same could be done with Matthew Wade by replacing him with Rahmanullah Gurbaz  who is a wk batter from Afganistan. He is prolific in the T20 format having scored over 1600 runs at a strike rate of 151.8. He has made an immediate impact in leagues around the world by scoring good knocks on his debut in the BPL and the LPL.

After 2 consecutive defeats SRH managed to get their1st 2 points by defeating the defending Champions on Sunday. T Natarajan, Abhishek Sharma & Sundar were the key players in that encounter. Kane Williamson's captaincy was the highlight when he dared to bowl Sundar against Uthappa who had good stats against him and he brought Natarajan in the last over instead of Sundar against Moeen Ali. Natarajan castled Gaikwad's stumps which was his 4th consecutive failure this season.

Shubhman Gill has 5 50s in his last 8 IPL innings

Kane Williamson: The IPL marked the return of Kane Williamson to competetive cricket after 4 months and the franchise would be hoping for their skipper to repeat his 2018 heroics. Kane Williamson has been dismissed cheaply in the 1st 2 innings with the 1st dismissal being a controversial one. He had another poor outing last game when he ended his innings at a SR of 80 but the for a player of his class it could take only one innings to turn things around.

Rahul Tripathi: Tripathi burst onto the scene in 2017 while opening for Rising Pune Supergiant. He racked up 391 runs at an impressive strike rate of 146. He had a a couple of off seasons with RR but was back at his best in KKR. Donning a new role, Tripathi batted in middle order and amassed 397 runs at a SR of 140. No wonder he fetched 8.5 crores in the auctions as he possesses the unique ability to attack from ball one.He was the top scorer in the 2nd game with a 30 ball 44 and hit a 15 ball 39 against Chennai in the last gam.

Hardik Pandya: India's best all rounder had an outing to forget last year. Due to Injuries, Hardik has not been bowling and subsequently lost his place in the national side for these 2 reasons. This IPL is a great opportunity for him to win the trust back of the selectors and make a strong statement ahead of the t20 wc. In 2019 and 2020, Hardik scored the most runs in the death overs. He smashed 463 runs at a SR of 221 with 39 sixes. He has started decently in his 1st 3 games both with the bat and the ball. He gave only 22 runs in his 2nd match and was economical in the 1st game as well untill the last over spoiled his figures. He picked up the important wkt of Mayank in PP in the last game.

Mohammad Shami: Since the last season, Mohammad Shami has picked up 25 wkts at an eco of 7.5. GT would be hoping for an another Powerplay masterclass by him just like in the game against Lucknow.

Aiden Markram: In the past one year, Markram has scored 570 runs for SA at a SR of 148. He had a very good outing in t20 wc and was featured in ICC's team of the tournament. Markram is also a useful part time off spinner and does the job well in Powerplay. He was the top scorer for SRH in the 1st game and scored a 50

Abhishek Sharma: The young southpaw was the top scorer in the chase against CSK with 75 and proved why SRH went onto aggresively bid for him during the auctions

T Natarajan: He has picked 6 wickets from 3 games. 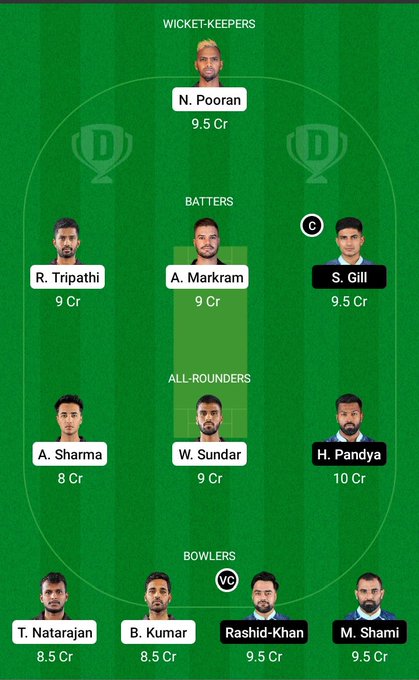