Punjab Kings emerged victorious in a nail biter against CSK.  They had now defeated the defending champions twice in this season & Arshdeep Singh was the star as he displayed a yet another death bowling masterclass. It appeared that PBKS's campaign is back on the track and they had made good changes going into the game by fielding Rajapaksa & Rishi Dhawan. But they faltered again in the last game as PBKS could not chase a modest total of 153 against LSG. Middle order has been a huge problem for Punjab inspite of Livingstone & Jitesh Sharma playing few blinders. Against SRH they collapsed from 151-5 to 151 all out in a blink of an eye whereas against Delhi, they put up their 4th lowest score in the IPL.  Liam has 3 50s and Jitesh has scored 124 runs at a SR of 155. PBKS have lost 34 wkts in the middle overs which is 2nd most for any team and their RR is 7.72. On the contrary, their scoring rate is 8.94 in the PP which was the best among all teams before the last game.

Declared as one of the worst teams after auctions,  GT have silenced every critic by being the table toppers. Captain Hardik Pandya has led from the front in both the departments. Tewatia has done his thing in 4 games, Miller has  done exceedingly well as the Seniormost batter in the side and the duo of Shami - Lockie continue to pick up wkts. Just like Ayush Badoni for Lucknow and Jitesh Sharma for Punjab, GT have unearthed some gems in Abhinav Manohar & Yash Dayal but they did the wrong thing in dropping Sai Sudarshan for Vijay Shankar earlier in the season and now have dropped Manohar for Sudarshan.  GT have one major chink in their armour and that is the top 3 and only Shubhman Gill has scored some runs followed by Saha in the last 2 outings. They had hit only one six in the Powerplay till the 5th game. Game after game GT have been exceptional under pressure in chases. The trio of Tewatia, Miller and Rashid deserve a whole lot of credit. GT's one foot is almost into qualifiers and today's win will seal their place.

Rashid Khan/Kagiso Rabada: He was the stand in captain in the game against CSK and displayed his prowess with the bat while chasing and scored 40 off 21 balls. He again did what he has been doing in leagues like BBL and PSL all these years and smashed 31 of 11 deliveries to take GT to a memorable victory against SRH.  9 wkts at an eco of 7.1 are his stats in this season. Rashid has never finished a season with an eco of greater than 7. Since 2019, Rabada has taken 83 wkts in 52 innings and took atleast 1 wkt in every game from May 2017 to Oct 2020. He took 4wkts in his last game.

Hardik Pandya: India's best all rounder had an outing to forget last year. Due to Injuries, Hardik has not been bowling and subsequently lost his place in the national side for these 2 reasons. This IPL is a great opportunity for him to win the trust back of the selectors and make a strong statement ahead of the t20 wc. In 2019 and 2020, Hardik scored the most runs in the death overs. He smashed 463 runs at a SR of 221 with 39 sixes. He has started amazingly well  this season both with the bat and the ball. He is the 4th highest scorer of the season with 308 runs.

Liam Livingstone: He had a tough outing last year with an average of just over 8 in 5 games. Liam was the highest scorer in The Hundred with 348 runs. He scored England's fastest ever international century when he reached the milestone from just 42 balls against Pakistan at Trent Bridge. With 60(32) and 2 wkts against CSK, a quickfire 60 against GT and another solo show in the last game against SRH proves he has really arrived and its just a glimpse of what we are going to witness. He has 3 50s  which is the joint most as a middle order batter in this season. He has hit 20 sixes so far in this season.

Jitesh Sharma: 124 runs at a SR of 159.1 batting at 5/6 in this season. The wk batter from Vidarbha has produced a cameo in almost every outing so far. 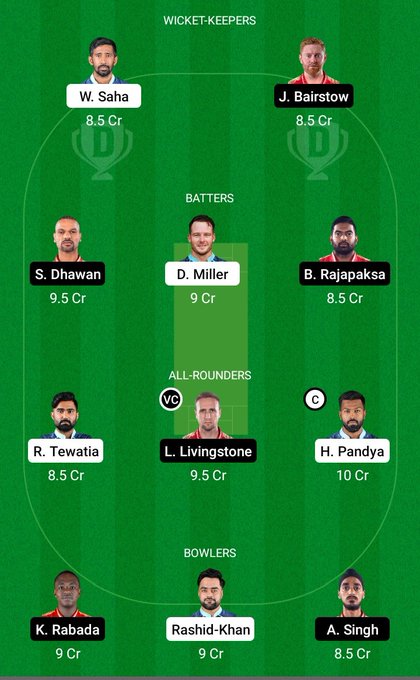