We are in the "endgame" now. The playoffs scenario is quite clear and only an unexpected series of events can deny a team currently in the top 4 from making the playoffs. Its mostly about who finishes where in the top 4 from here. The winner of today's game will be the 1st one to officially qualify for the playoffs. A week ago, it looked like Gujarat will end up at the top of the table but they have suffered 2 back to back defeats against Punjab and MI. The late exploits of Miller, Tewatia and Rashid have till now covered many holes in Gujarat's batting line up. Gill has now had a long dry run after his back to back knocks of 84 & 96. No 3 is a major concern, though Sudharshan has got few runs, they haven't been enough or have come at a lower strike rate. Hardik's last few innings have contributed very less to the team's total. Meanwhile, Wriddhiman Saha has been the lone bright spot in the top order. He has scored 198 runs at a strike rate of almost 140. Lockie Ferguson in his last 5 innings is averaging 47 at an eco of 9.7 and has taken just 4 wkts. GT might make 2 changes, Gurbaz and Yash Dayal in place of Sudharshan and Lockie. Gurbaz is a hard hitting top order batter from Afghanistan and is a part time wk keeper. He strikes at 150 in t20s and has scored more than 1600 runs. He was impressive on his LPL and BPL debuts.

Skipper KL Rahul is spoilt for choices when it comes to the bowling department. 2 pacers in Avesh and Chameera followed by Holder in middle & death overs. 2 spin all rounders in Krunal and Hooda. A leggie in Bishnoi and 2 extra options in Stoinis & Badoni. It won't be wrong to say Lsg are the most complete bowling unit and a major force behind their position in points table. A lot of credit goes to Flower & Gambhir for assembling such a squad at the auctions. Krunal has the 2nd best eco in this season and as a result LSG have the 2nd best RR in middle overs (7.58). As of now a stable no 3, Badoni and Bishnoi's form are some minor concerns for the side. Left arm pacer Mohsin Khan is one of the find's of the season and has the best eco for a pacer who has bowled min 100 balls.

Jason Holder: One of the most improved t20 cricketers in the recent times. Holder adds immense value to this Lucknow side both with the bat and the ball. He has taken 12 wkts at an eco of 9.3 and 11 wkts have come in the middle and the death overs.

Rashid Khan: It was about time for Rashid to show what he is capable to do with the bat. He was the stand in captain in the game against CSK and displayed his batting prowess while chasing and scored 40 off 21 balls. He again did what he has been doing in leagues like BBL and PSL all these years and smashed 31 of 11 deliveries to take GT to a memorable victory against SRH.  11 wkts at an eco of 6.8 are his stats in this season. Rashid has never finished a season with an eco of greater than 7.

Hardik Pandya: India's best all rounder had an outing to forget last year. Due to Injuries, Hardik has not been bowling and subsequently lost his place in the national side for these 2 reasons. This IPL is a great opportunity for him to win the trust back of the selectors and make a strong statement ahead of the t20 wc. In 2019 and 2020, Hardik scored the most runs in the death overs. He smashed 463 runs at a SR of 221 with 39 sixes. He has started amazingly well  this season both with the bat and the ball. Scored 333 runs which includes 3 50+ scores.

Krunal Pandya: He has the 2nd best economy rate in this season after Sunil Narine (min 25 overs)

Mohsin Khan has 9 wkts in last 4 games and he could well cause trouble for the GT batters with his hit the deck style of bowling. 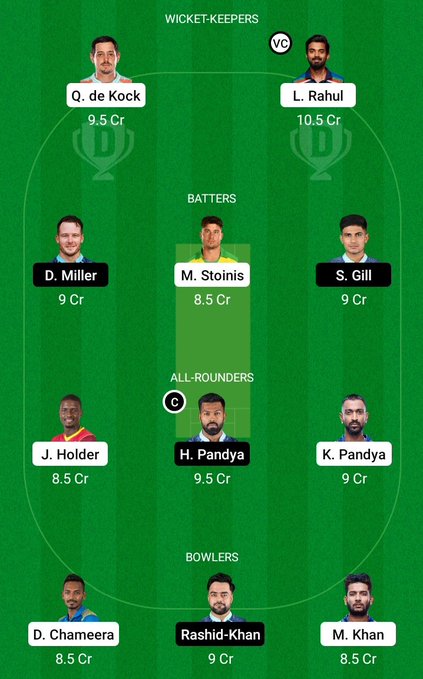 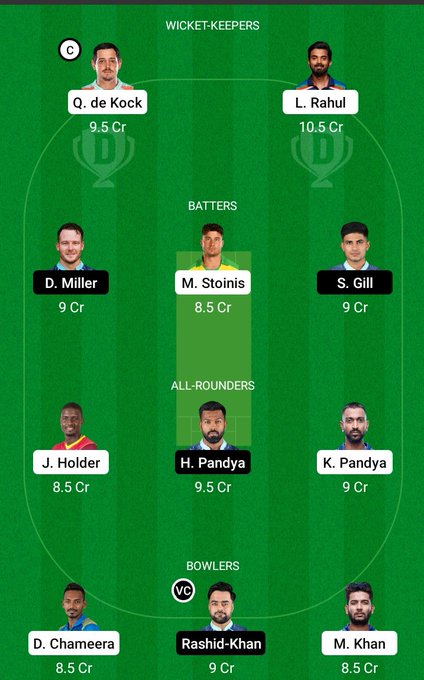