The Sunrisers Hyderabad will lock horns with the Rajasthan Royals in the 5th match of 2022 IPL at the MCA Stadium in Pune.
SRH have once again shown a lot of faith in the young uncapped Indian players as evident from their signings with Priyam Garg, Abhishek Sharma, Kartik Tyagi, Suchith and Rahul Tripathi. They also managed to buy back Bhuvi and Natarajan who were  struggling with form and injuries fitness but have done exceedingly well for them in the past. Pooran, Markram and Abdul Samad in middle order will give much needed fire power, an area where they were struggling in the last season. Addition of Romario Shepard and Marco Jansen to the all rounder list further strengthens their side.

Getting Ashwin and Chahal for a combined 11.5 crores was the best hand played by RR in the auctions. Having picked only 3 overseas players till the last hour, RR had no second thoughts about filling their remaining spots with Rassie, Neesham, Daryl Mitchell and Coulter-Nile. Sanju is expected to play at 4. It will be interesting to see if they adjust Buttler at 3 and send Jaiswal and Devdutt to open.

Team News: Both teams are not affected by the unavailabilty of Australian or Windies player except for Sean Abbott who will be available after 6th April for SRH.

Sanju Samson: Often criticized for his inconsistency, he has exhibited great improvement in the last 2 seasons of the IPL. He used to start the season strong and then post a string of low scores. He is the only middle order batter apart from AB de Villiers to score 3 centuries as a non-opener. Since 2018, Samson has scored over 1600 runs at a scoring rate of 144. Only Rishabh Pant had a better SR than him among the Indian batters.

Jos Butler: Since 2018, Butler strikes at 149 in the Powerplay with almost 650 runs. Regarded as one of the most dangerous white ball batters in the world, he had a brilliant t20 wc where he scored a scintillating 100 against SL on a slow Sharjah Pitch.

Yuzvendra Chahal: He has been RCB's backbone in the bowling department for years. He parted ways with franchise after being their highest wicket taker with 139 scalps at an economy of 7.6. He is the highest wicket taker (110) in the middle overs phase. Next best is Rashid Khan with 71 wickets.

Trent Boult: Boult took 16 wkts in the Powerplay in 2020 and was one of the major reasons in MI's title wim. Krishna and Boult will form a good pair with the new ball.

Kane Williamson: This game will mark the return of Kane Williamson to competetive cricket after 4 months and the franchise would be hoping for their skipper to repeat his 2018 heroics. Whats been impressive is Kane's SR at death is 172 in last 2 seasons.

Rahul Tripathi: Tripathi burst onto the scene in 2017 while opening for Rising Pune Supergiant. He racked up 391 runs at an impressive strike rate of 146. He had a a couple of off seasons with RR but was back at his best in KKR. Donning a new role, Tripathi batted in middle order and amassed 397 runs at a SR of 140. No wonder he fetched 8.5 crores in the auctions as he possesses the unique ability to attack from ball one.

Aiden Markram: In the past one year, Markram has scored 570 runs for SA at a SR of 148. He had a very good outing in t20 wc and was featured in ICC's team of the tournament. Markram is also a useful part time off spinner and does the job well in Powerplay

Nicholas Pooran: Pooran had an impressive last 2 t20i series against England and India. SRH would be hoping he carries the same form into the IPL. 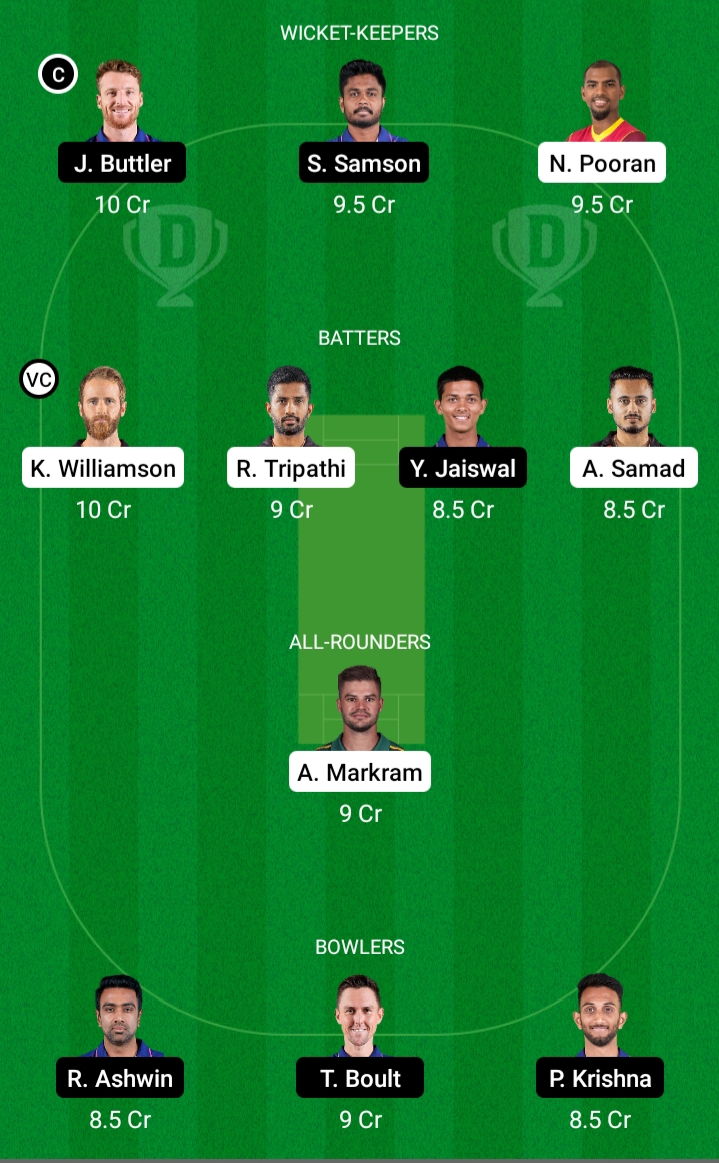 Just @fazalfarooqi10 proving that he's a man of his word. 🗣️