Karma is a Pitch

Michael Vaughan & David Lloyd have been fairly vocal in criticizing the nature of the pitch since the 2nd Test in Chennai. They believe a Test pitch should last 5 days and shouldn't turn so much from Day 1 which was rightly played down by Ashwin in the press conference. Former English cricketers also accused India of playing on strengths by tweaking the rules of ICC regarding pitches.

If only they did some introspection or rather not hid their own knack of 'playing on strengths', they would know that India is still far behind England in that regard. The below graph can put things into a particular perspective and give an idea on the length of Tests played across countries. 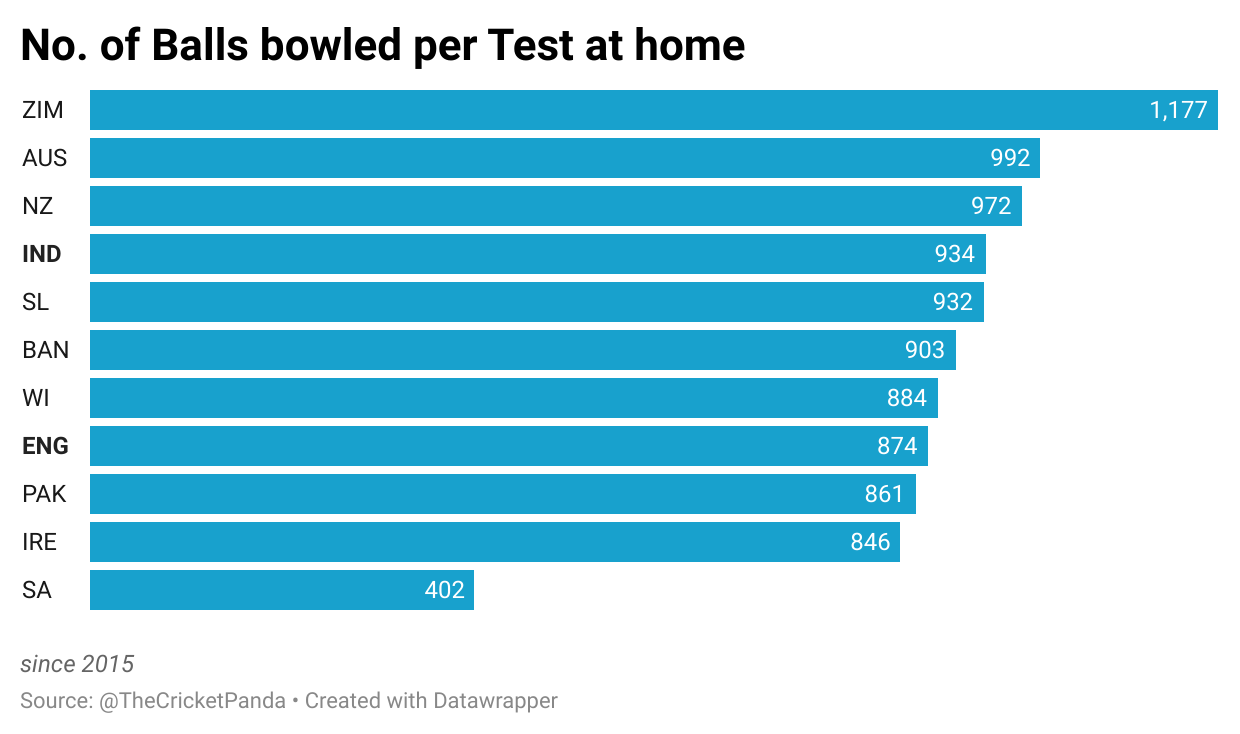 For some specific instances on a greater detail here are some stats below.

Number of matches since 2010 where England won bowling less than 100 overs in the match at home while Pacers dominating the attack against Asian teams.

Number of matches since 2010 where India won bowling less than 100 overs in the match at home while Spinners dominating the attack against non-Asian teams.

These are the only 2 instances for India over 6 of England's.

Even in Chennai when there were shouts of an unsuitable track, Ashwin silenced them all with a brilliant ton at home turf. Not to forget Rohit, who likes pace off the pitch, put up an exhibition of 161 runs on a pitch which happened to have enough turn from Day 1. The key was always going to be application and execution.

Are they not good enough?

Joe Root has shown immense growth as a player of spin over the years. Has exceptional hit-rate while sweeping. Some find it easy to blame the pitch when Root is doing better with the ball than with the bat.

But Root's success with the ball doesn't necessarily qualify it as an 'awful' pitch. Bowling was always going to be easier than scoring runs in these conditions. Astute landing with enough deception is the key and if a part-timer is able to land 3 out 10 at the right spot, he's game. Only a matter of time when the batsman plays a straighter one for the turn.
Regarding Root's failures with the bat, his sweeps were nullified by the uneven bounce which wasn't the case in the 1st Test in Chennai.

Apart from Root, no other batsman had that kind and length of exposure to hardcore spin conditions. Buttler, their most acquainted batsman took off home after the 1st Test which left a gigantic void. He could have come through with some quick runs on these low-scoring tracks. The same goes for Moeen who became unavailable. They were bound to crash and burn in extreme situations with a visible lack of technique to counter spin against a quality attack.

The default template for a Test pitch is that it should swing the first day and spin on the last two. But people often mistake it as a rule instead of guidelines. To be critically honest here, mid-game brooming on the pitch to take off the dust on Day 2 or ball displacing chunks off the pitch isn't a very encouraging sight for a viewer, but as long as it's not dangerous for batting, it's technically and sportingly fine.

England has ignored these 'supposed' guidelines in their own den for a while where there isn't much turn even on the last day of the Test and pacers dominate through and through.

SR & Average of England pacers during 3rd & 4th innings when they host India since 2015:-

SR of Indian Spinners during 1st and 2nd innings when they host England since 2015:-

3rd & 4th innings are taken into consideration because it's not 'supposed' to help pacers much in those innings and vice versa for India. So it might not be wrong to assert that England's own Karma is catching up with them with these rank turners as they have been playing their own game with their own rules for far too long.