After a 3-0 whitewash over India, South Africa are set to lock Horns with Bangladesh for a 3 match ODI series. This series is significant for the hosts as they would look to collect few points in the Super league and better their position in the table. Currently, Banglaesh are at the top of the super league standings whereas SA are languishing at no 10 and are at a direct threat to play the qualifiers for the 2023 world cup if they drop any series henceforth. The series is already in news because of frontline players pulling out of the test side to play in the IPL and Shakib's last minute availability and the whole drama surrounding around it.

Bangladesh come into this series on the backdrop of 3 consecutive ODI series. Barring the 2-1 loss against Eng in 2016, Bangladesh have an impeccable home record in the ODIs since 2015. They have been victorious in 11 out of 12 series at home since the 2015 world cup. On the other hand, they have been disappointing away from home. They suffered 3 consecutive clean sweeps in NZ and a clean sweep in SA the last time they toured there. Bangladesh have never won any international game in SA. They will take lot of confidence from what they did in NZ where they had a similar record of not winning any game before the 1st test in January.

South Arica will take lot of pride in what they achieved against India in the home season early this year and would look to maintain their unbeaten streak against the visitors. Rassie van der Dussen, Quinton de Kock and Temba Bavuma scored a 100 each, Keshav Maharaj bowled at an impressive economy rate of 4.59. SA have played 43 odis at Centurion and have lost 15 of them. Rabada is back into the side after being rested for the series against India. Albie Morkel has joined Bangladesh as power-hitting coach

Quinton De Kock: Undoubtedly one of the best ODI openers of this generation. QDK became the 6th fastest batter in terms of innings (127) to get to 17 ODI 100s. He averages 59 against the visitors in just 7 innings with 354 runs and one 1 100. Has registered 2 100s in his last 2 ODI series.

Kagiso Rabada: KG had a memorable debut against Bangladesh in 2015 where he took a hattrick on debut. With 13 wkts in 7 innings at an eco rate of less than 5, he has an impressive record again

Shoriful Islam: He played a major part in Bangladesh winning the u 19 wc in SA in 2020 where he picked 9 wkts in 6 games.

Shakib Al Hasan: Shakib delivered a performance for the ages in 2019 WC. But since then, his career has gone only south because of numerous off the field issues. He is the most experienced player in the side and his last minute availibility must have boosted the Bangladesh side. 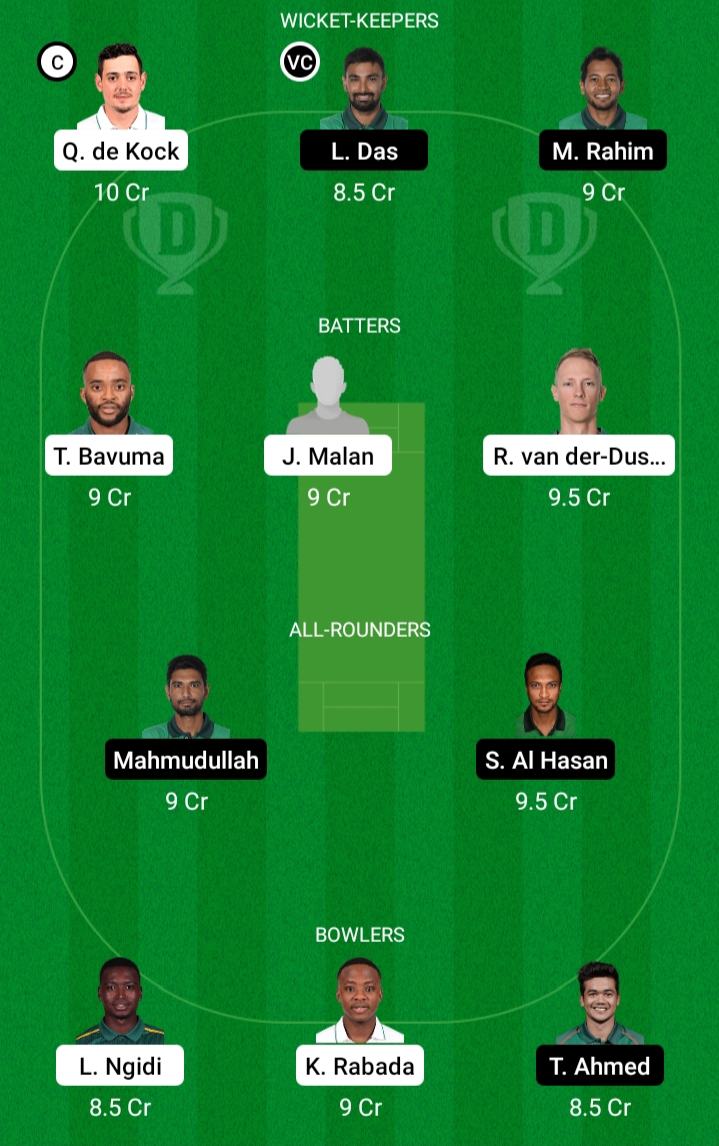