It was the 1st thing almost everyone checked when the schedule was announced-the dates for Cricket's El Classico. But who knew it would be a dead rubber between two teams, with one already out and the other on the verge of elimination? The battle between these two legendary teams has little significance in the context of the points table for probably the first time in many years. If CSK win they'll jump to no 6, if they lose they'll be out of the tournament. Both teams will be without their 2 senior players. Suryakumar Yadav & Ravindra Jadeja have been ruled out of the IPL. While SKY has suffered a muscle injury in his left hand, the former sustained a bruised rib.

One can say in hindsight this situation had not arised if MI weren't late in figuring out their best 11. Too many changes were made in the bowling department and Tim David was benched after a couple of failures. In view of the future, it looks a strong side with Brevis, Varma, Tim David and Stubbs who'll probabaly be the core of middle order and with the addition of Jofra, bowling department is only going to get strengthened. MI's position in points table should also be attributed to Rohit & Ishan's form. This was the season where MI needed their most seniormost batters Rohit & Pollard to step up.

A vintage MS Dhoni finish helped them gain another 2 points in the  game against their arch rivals Mumbai Indians in theeir last encounter but probably left it little too late for him against PBKS & RCB. What changed for CSK after a horror start to the season is their bowling in PP. In the 1st 4 games, they had picked up just 1 wkt in the PP. In the last 7 games, they have picked up 15 wkts courtesy Theekshana and Choudhary who have picked majority of the wkts.. CSK were always known for batting deep but this time they don't have the riches lower down the order. There were few games where Pretorious was underutilised as a batter and Jadeja's poor form with the bat hasn't helped their cause either.

Jasprit Bumrah: : A rare off season where he took just 5 wkts before the last game but made a loud statement by taking the 2nd best figures by an Indian bowler in the IPL. His eco hasn't been that bad as the wkts column suggests and with his new found rythm he could run through CSK's line up.

Ruturaj Gaikwad/ Ishan Kishan: The orange cap winner of last season had a 1st half to forget with a strings of low scores but managed to score 2 half centuries and gave a good start to CSK in the last innings. Same has been the case with Ishan, strings of low scores accompanied by 3 half centuries in this season. T20 is an openers game and its always a safe bet to bank on openers irrespective of their form and consistency

Kieron Pollard: The big man is going through his worst ever IPL season after 2011 but he has historically done well against the men in yellow.

Mahesh Theekshana: He has the most wkts by a spinner in PP in this year's IPL

Mukesh Chaudhary: 13 wkts in 10 games, 2nd most by an uncapped fast bowler. 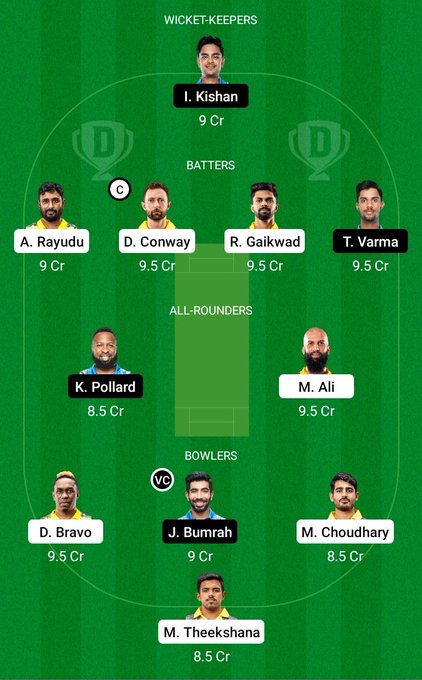 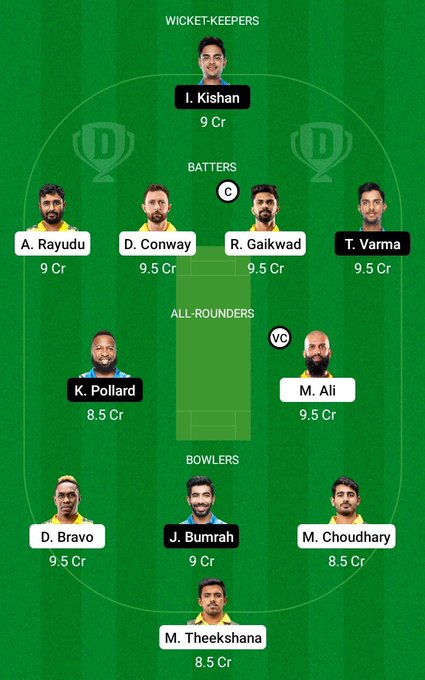