We are into the final stages of the tournament and the race for the playoffs is getting more & more trickier day by day. Apart from GT who are almost qualified, there are 7 teams who are fighting for the remaining 3 spots. Things have become interesting after RCB's win day before yesterday & DC's victory over SRH last night. 3 teams have been tied at 10 points from 5 games. SRH at one point looked like they will comfortably get into playoffs but 3 back to back losses have dented their chances big time. RR and RCB have a slight edge, while MI's chances are in decimals.

Declared as one of the worst teams after auctions,  GT have silenced every critic by being the table toppers. Captain Hardik Pandya has led from the front in both the departments. Tewatia has done his thing in 4 games, Miller has  done exceedingly well as the Seniormost batter in the side and the duo of Shami - Lockie continue to pick up wkts. Just like Ayush Badoni for Lucknow and Jitesh Sharma for Punjab, GT have unearthed some gems in Abhinav Manohar & Yash Dayal but they did the wrong thing in dropping Sai Sudarshan for Vijay Shankar earlier in the season and now have dropped Manohar for Sudarshan.  GT have one major chink in their armour and that is the top 3 and only Shubhman Gill scored some runs earlier in the tournamnet followed by Saha in the last 4 outings. They had hit only one six in the Powerplay till the 5th game. Game after game GT have been exceptional under pressure in chases. The trio of Tewatia, Miller and Rashid deserve a whole lot of credit. GT's one foot is almost into qualifiers and today's win will seal their place.

Will MI finally break the shackles and register their 1st win this season ? A question which was on every cricket lover's lips these days. 2008, 2014, 2015 and now 2022. Losing 1st 4/5 matches wasn't a new thing for MI. They even won the championship in 2015, made it to playoffs in 2014 and missed out narrowly in 2008. But things are diff this time. MI has became the 1st team to lose their 1st 8 games and In a 10 team tournament its quite difficult to seal your spot in top 4 and this MI side is weak on many fronts. Last Saturday they finally managed to open their account on the backdrop of debutant Kumar Kartikeya and the duo of Surya & Varma. What has been more bizarre from MI is their selections and playing 11 combinations in the 1st few games. They benched Tim David  after one failure who they aggresively pursued in the auctions and went with just 2 Overseas players against RCB. Perhaps, the biggest disappointment of the tournament has been the opening duo of Rohit & Kishan. This was the season Rohit had to step up being the most seniormost batter in the side. Ishan now has registered 7 consecutive low scores. MI have the worst death bowling rate in the tournament (12). In view of the future, things are looking bright. Shokeen, Kartikeya, Brevis, Varma and the new addition Stubbs could form the core in upcoming years.

22 IPL games have been played at Brabourne.
Teams batting 1st have won  11/21 games.

Rashid Khan: It was about time for Rashid to show what he is capable to do with the bat. He was the stand in captain in the game against CSK and displayed his batting prowess while chasing and scored 40 off 21 balls. He again did what he has been doing in leagues like BBL and PSL all these years and smashed 31 of 11 deliveries to take GT to a memorable victory against SRH.  9 wkts at an eco of 6.9 are his stats in this season. Rashid has never finished a season with an eco of greater than 7.

Hardik Pandya: India's best all rounder had an outing to forget last year. Due to Injuries, Hardik has not been bowling and subsequently lost his place in the national side for these 2 reasons. This IPL is a great opportunity for him to win the trust back of the selectors and make a strong statement ahead of the t20 wc. In 2019 and 2020, Hardik scored the most runs in the death overs. He smashed 463 runs at a SR of 221 with 39 sixes. He has started amazingly well  this season both with the bat and the ball. Scored 309 runs which includes 3 50+ scores. It won't be surprising if he turns up against his old team in today's fixture. Players performing against their ex teams is the new norm.

Suryakumar Yadav: MI missed a stable middle order batter in the 1st 2 games and were boosted by the addition of Sky in the  match against KKR. He is a vital cog in this MI line up and has produced 3 consecutive 400+ seasons from 2018-20. 52(36) v KKR, 68(37) v RCB and almost a match winning knock of 43(30), followed by a couple of 30s and a 50 in his last game against RR his last 7 outings since comeback from injury.

Tilak Verma: The southpaw from Hyderabad was a member of India’s U19 World Cup in 2020. He was picked by MI at 1.7 crores after facing a little competition from SRH, CSK and RR. His last outings in VHT and SMAT are one of the major reasons why so many franchises raised the paddle for him. He scored 215 runs in SMAT at a strike rate of 147. Tilak Verma became the youngest batter for MI to score a half century in the last match against RR and followed it up with a 38 against KKR. He again lauched a quickfire attack against Punjab with 36 off 20 balls but was unfortunate to get run out. He was the top scorer in game against CSK with 51and ended with another 38 against LSG and 35 against RR in the last match.

All 3 openers, Ishan, Rohit and Gill are struggling for runs this season and all are due for one big innings. It won't be bad bet to pick anyone of these players. 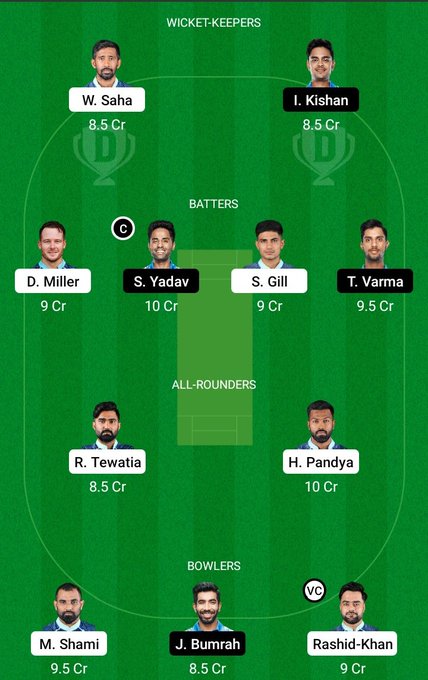 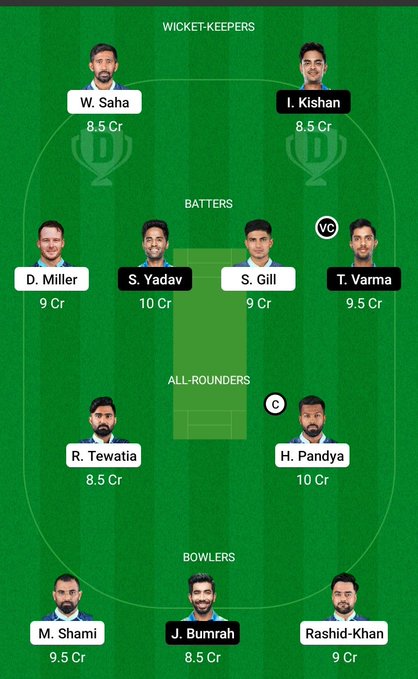