We are in the "end game" now. There are 10 matches left in the league stage, and five teams are vying to secure the final two places. The two most successful teams, CSK and MI, have been eliminated from the tournament, so this will be the only 2nd time playoffs will be played without them. (2016, 2022). GT has qualified, LSG is virtually qualified, while KKR's fortunes are dependent on other results and chances of them going through are remote. The teams involved in this battle are RCB, SRH, RR, DC and PBKS. Of these, RCB have a good chance of winning. Due mainly to the way they are playing and winning one out of the two remaining games does not seem impossible. DK, Hazlewood & Hasaranga  are the major reasons behind RCB's current position in the points table. Hazlewood has been superb with the new ball. He has an eco of 5.6 in the powerplay and bowled crucial overs at the death in their wins against LSG & CSK. DK is probably the best batter in end overs. He has has scored 204 runs at a SR of 229 and bailed out RCB in almost every game. RCB's management received widespread criticism for a huge budget expenditure on Hasaranga, but he justified it with big wickets taken during middle overs. RCB have 2 weak links. Scoring rate in Powerplay and Virat Kohli's form. They have the 2nd worst RR in PP - 6.93. The other being Mohammad Siraj's form.

PBKS have the team on the paper but they haven't clicked as a unit. The issues are quite obvious. Mayank Agarwal has had his worst season and just managed to score 1 50. Rajapaksa had to sit out for Bairstwow which was a right move but he failed to replicate his success of the last 3 seasons. Arshdeep Singh hasn't been getting the adequate support at death from Rabada and Sandeep Sharma. PBKS have lost the most wkts in middle overs and no genuine finisher at 7 doesn't help their cause either.

23 IPL games have been played at Brabourne.
Teams batting 1st have won  12/21 games.

Wanindu Hasaranga / Josh Hazlewood: 21 wkts at an eco of less than 8. Hasaranga has got a big wkt in almost every game and almost sealed the games against MI, RR, DC & CSK, SRH in RCB's favour with his bowling. RCB missed a strike bolwer in the initial games due to Josh's absence and Siraj's form. But since Josh has joined the side he has taken 13 wkts in 8 games.

Shikhar Dhawan: Season after season Shikar has put up 400 runs consistently. He has 13 seasons of 300+ runs ( most). Even this year, he is on his way to another 400 run season. Since switching to DC in 2019,  Dhawan is the 2nd highest run scorer after KL Rahul.

Liam Livingstone: He had a tough outing last year with an average of just over 8 in 5 games. Liam was the highest scorer in The Hundred with 348 runs. He scored England's fastest ever international century when he reached the milestone from just 42 balls against Pakistan at Trent Bridge. With 60(32) and 2 wkts against CSK, a quickfire 60 against GT and another solo show against SRH proves he has really arrived and its just a glimpse of what we are going to witness in upcoming years.  He has 3 50s as a middle order batter and a SR of 184 in this season. He  has hit 25 sixes so far.

Arshdeep Singh: Arguably one of the best death bowlers of the season. He has an eco of 7.3 in the end overs ( best for a bowler with min 10 overs)

Jonny Bairstow/ Glenn Maxwell: These explosive batters haven't really set the stage on fire this season. Opening the innings, JB has a great chance to get a big score. 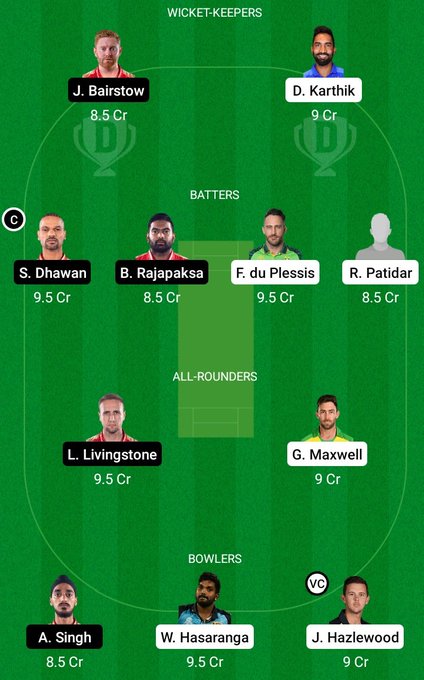 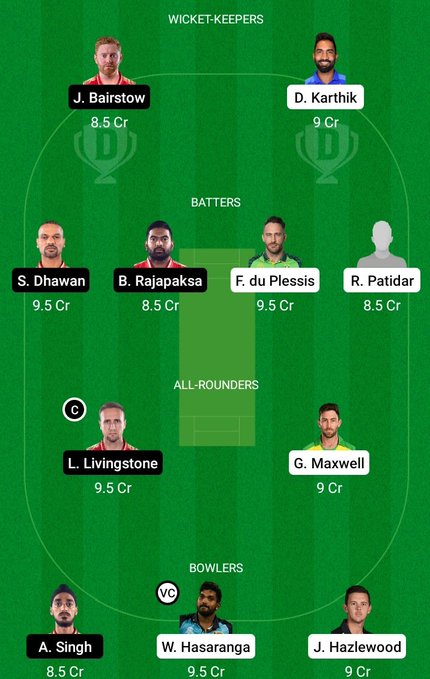