The retirement of Ben Stokes, the extension of the IPL window, and the rise of new leagues over the past 2 weeks have all fueled discussions about ODI relevance and the need to scrap them because of waning viewer enthusiasm. Contrary to all these things we had 2 thrilling last over finishes in the ongoing ODI series and after a long time we have witnessed a hard fought series between the 2 sides. Axar Patel broke many records during his innings of 64 from 35 balls on Sunday. He walked in when Ind needed 110 in around 11 overs. He became the only batter after Mohammad Kaif to top score in a 300 run chase batting at 7 or below. WI had their moments in both the games esp in the last one where they had almost sealed the game after Samson's run out on 54. Shai Hope registered his 13th ODI 100 and his 3rd against Ind since 2018. Shreyas Iyer continued his impressive run against the Windies where he scored his 7th 50 in 9 innings. Avesh Khan had a forgettable debut as he registered the worst nos for Ind on ODI debut ( thoose who bowled atleast 5 overs )

WI have played 5 ODI series this year and have managed to win only against NED. They suffered a home loss against Ireland, Bangladesh and in Pakistan and India. Since the start of 2020, they have played 10 ODI series and won only 3. With the retirement of Pollard and unavailability of Lewis and Hetymer the Windies side have suffered a huge setback. There have been few good performaces at an individual level from the likes of Brooks and Hosein but overall they are a highly inconsistent unit. Friday's and Sunday's win would have been a huge achievment for them as they narrowley fell short of 3 runs while chasing 308 in the 1st ODI and failed to defend 6 runs from 3 balls in the 2nd. They have not defeated a top side in bilaterals since 2020 ( SL).  2 times they have scored 300 at home against India and failed to win the match while chasing and Overall they have scored 300+ 3 times and have lost all 3 games.

Shai Hope: He is the 3rd fastest batsman to reach 4000 ODI runs in terms of innings (88). He is the glue in this Windies line up. He has gone through a little decline in last 18 months as he is averaging just a touch above 40 since 2021 compared to his career average of 50. Hope averages 47 against Ind with 3 centuries and 4 half centuries.

Shikhar Dhawan: Since 2020, Dhawan is averaging 50+ in the format across 20 innings. He is the most experienced batter in the side and played his 150th ODI inning in the 1st match. Only Kohli and Amla had more runs after 150 ODI innings.

Akeal Hossein: He has been Windies best spinner in ODIs for a while. He has picked 38 wkts since 2021 which is the most by any WI bolwer since 2021 at an impressive eco of 4.5.

Yuzvendra Chahal: He has been one of the consistent spinners in this format in last 5 years. He took a 4 wkt haul against Eng in the 2nd ODI and with that now has a 4 wkt haul in 3 out of the 4 SENA countries with a career best figures of 6/42 in AUS. He had a tough outing in last game going for almost 8 an over but given the struggles of few WI batters against leg spin he'll be having a huge role to play in middle overs. 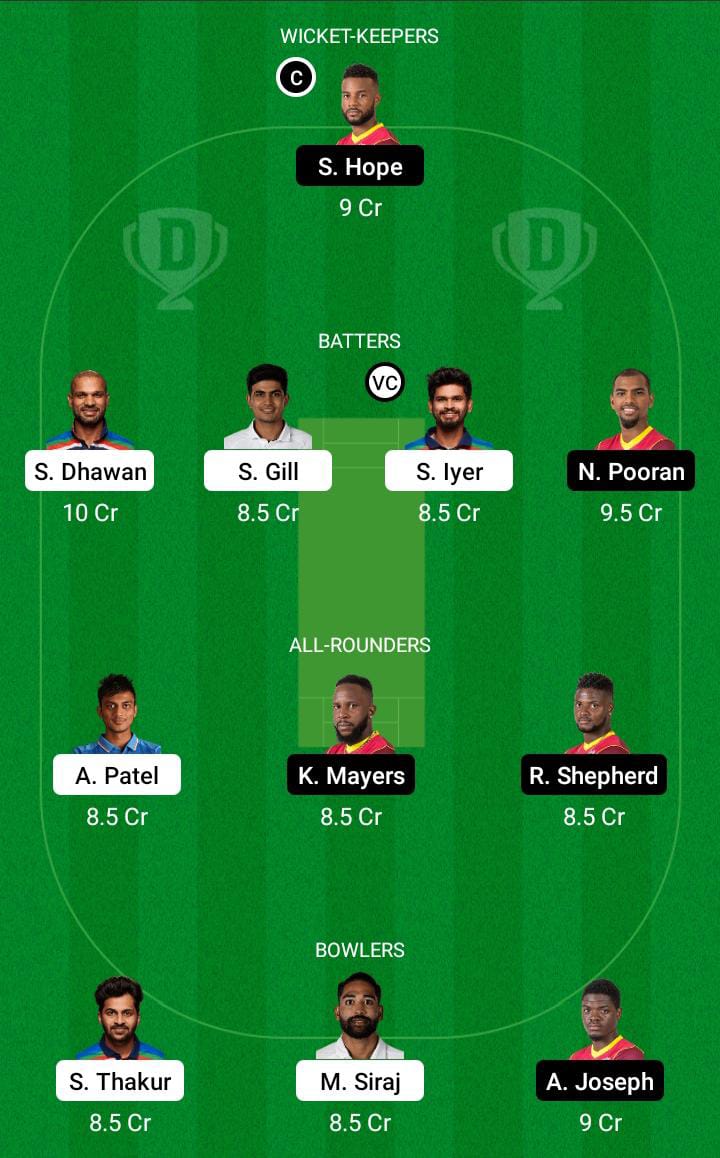