ENG has struggled so far with the "red ball reset" or the "development series", as they called it before the first test, thanks to lifeless strips in Antigua and Barbados that ended in dull draws. The positives that Eng will take from the series are Jonny Bairstow's continued form from Sydney, Ben Stokes bowling marathon spells, and Joe Root being at his best. Having Lawrence and Crawley among runs is a great advantage for them to make a strong start in the home season against NZ, Ind and SA. On these surfaces, England do not have a bowling attack that can run through gritty batting line-ups. Mark Wood and Ollie Robinson, supposed to lead the bowling attack are unavailable due to injuries. It is beyond logical and rational to consider Woakes as England's lead pacer when he averages 54 away from home. For example, Mitchell Starc and Pat Cummins have been able to make inroads in Pakistan on similarly flat decks. So far, Jack Leach has put in tremendous effort. He bowled more than 90 overs in the 2nd test, which is the most by an English bowler since 1962.

It is clear that the WI batters are not rushing to try and enforce a result on these benign, slow, and low surfaces. The manner in which they batted and the scoring rate in the 1st innings suggested they are in no mood to show any urgency and put Eng under pressure in the 3rd innings. During his marathon innings, Kraigg Brathwaite came close to playing 500 deliveries, which was the last time anyone did that since Pujara in 2017. As the contest moves to the 3rd and final test it is vital that Grenada produces a spicy wicket to bring some competition between bat and the ball. ENG have fond memories of this venue, having defeated WI in 2015 and leveled the series at 1-1 in the final test.England Men have made one change to their XI ahead of the third Test against the West Indies in Grenada. Craig Overton replaces Matthew Fisher in an otherwise unchanged XI. WI are expected to go unchanged but there is a remote possibility of Philip Anderson replacing Jayden Seales to manage his workload. 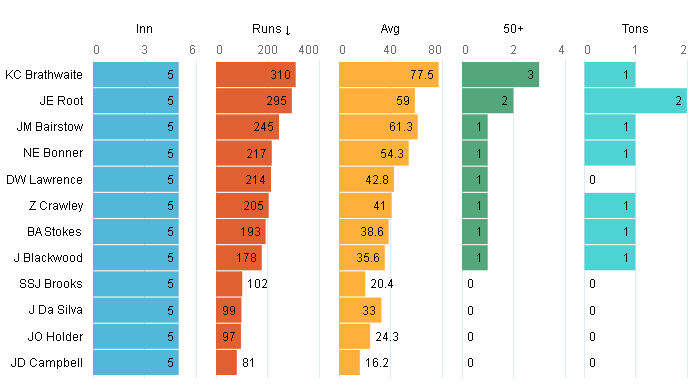 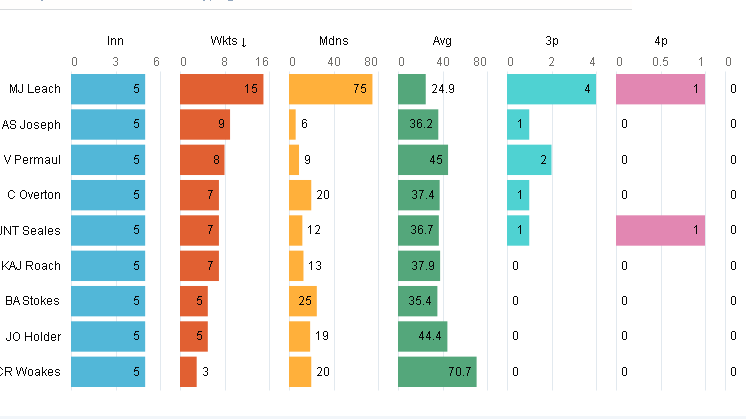 Joe Root: The ICC test cricketer of the year had one of the greatest calender years a batter could wish for. He has  ammassed 2052 runs since 2021 with an average of 58.62 and breaking the all-time record of Sir Vivian Richards with most top-scores for the team in a calendar year. What makes his achievement even more special is the 2nd highest run scorer in the side was Rory Burns with 550 odd runs. There was a staggering difference between the 1st and the 2nd best batter. Joe Root scored a fine 100 in his last Test in West Indies in 2019 and continued his rich vein form by scoring another 2 100s in the 1st 2 tests.

Ben Stokes: Cricviz Analyst declared the series as the 2nd most batting friendly series. Stokes has been England's best pacer on this tour by bowling the most overs (77) at an eco of 1.82 and taking 5 wkts.

Jonny Bairstow: Having played over 80 Test matches, JB's returns in this format are below average and the graph has only gone south since 2018. However, he showed his old spark and hunger in the longest format when he racked up a top notch 100 in the 4th Ashes test at Sydney. He carried from where he left in Sydney as he recorded a 100 in the 1st practice game of this tour and an another magnificent innings of 140 when Eng were struggling at 48-4.

Zak Crawley: The batsman went through a series of low scores and single digits after his scintillating 267 against Pakistan in 2020. Called back into the side midway through the Ashes Crawley responded with  knocks of 77 at Sydney, 36 at Hobart and 121 in the 1st test at the Sir Vivian Richards Stadium.

Kraigg Brathwaite: The last 10 100s by WI openers are all scored by Brathwaite. He has scored the most 100s for WI since the last decade with Chanderpaul at 2nd (9 100s). He made a record at Barbados by playing most deliveries by a WI batter.

Nkrumah Bonner: While everyone in the West Indies line up is averaging in 30s since past 2 years, Bonner  has been an exception. He averages at 44.11 from 11 Tests with 2 100s. He has top scored for the WI 5 times in this WTC cycle.

Kemar Roach: In the last 5 years, Roach has taken 116 wickets at an average of 24 and SR of 51. He has been the leader of West Indies' bowling attack. Roach along with Jayden Seales forms a potent bowling pair. He has dismissed Stokes and Bairstow 6 times each in test cricket.

Jason Holder: Often referred to as the best batsman in the side, the all-rounder's 200* in the last series between these 2 sides in West Indies would still be fresh among the visitors. England are Holder's favourite opponents. He averages 35.31 against them with 2 100s. With ball he averages 32 and has scalped 37 wickets.

Players facing 500+ balls in a Test match in West Indies since the Brian Lara quadruple century in 2004:

A simply brilliant effort from Jack Leach throughout the Test match 👏👏#WIvENG pic.twitter.com/WUJH59jyjq

Solid as a rock 👊

Kraigg Brathwaite's marathon effort against England is among the most balls faced in a Test innings by a captain this century 😲🙌#WIvENG #WTC23 pic.twitter.com/yuTv0E74O3 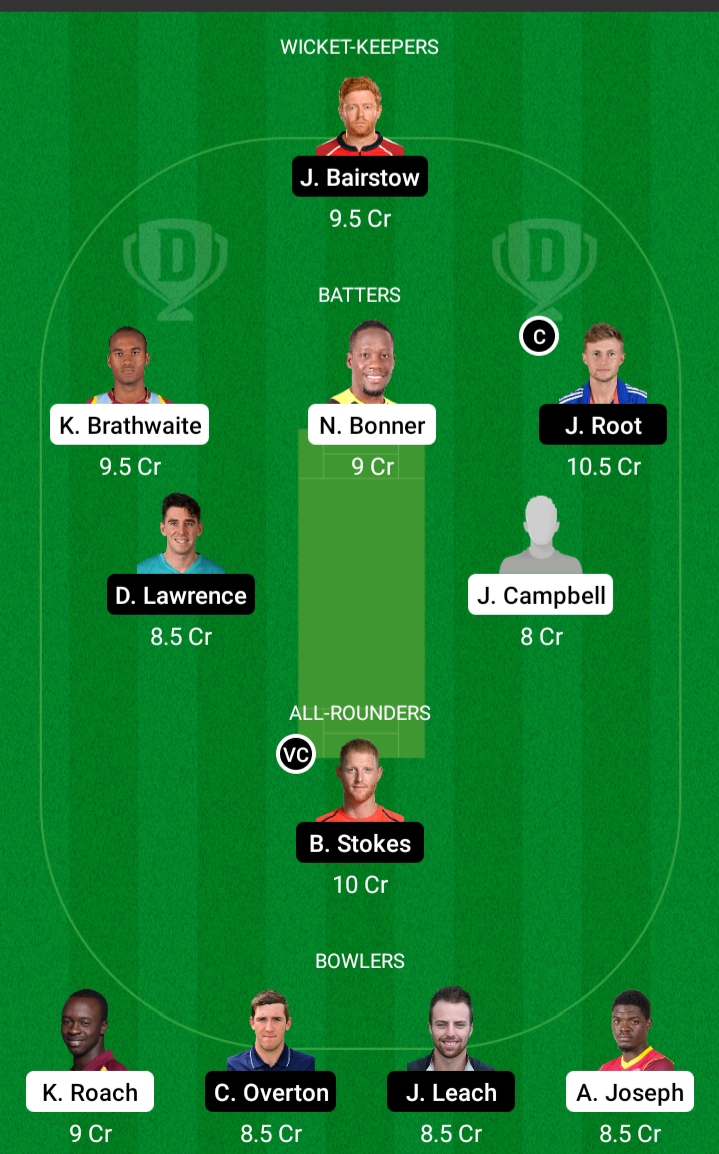