After a "long" gap of 10 days, the men in blue are back in action. The India series against Zimbabwe begins on Thursday and is normally overlooked by most observers because it is sandwiched between a just concluded Windies tour and the Asia Cup. Team India have sent a 2nd string side as there is very little time to prepare for the Asia Cup. Other than a couple changes, the 11 will likely be the same as it was against WI in the ODI series last month. KL Rahul returns to the white ball side after a lengthy battle with Groin Injury, surgeries, rehab, and Covid, he had a hard time staying healthy. It is very important for the skipper to get ample game time and this series is a perfect opportunity for him to prepare for the Asia Cup. He has happy memories of Harare the last time he played here 6 years ago. He made his ODI debut and cracked a 100 to become the 1st Indian player to do so. Overall, he averages 196 against Zim from 3 ODIs. In all likeliness, he may open the innings along with Shikhar Dhawan and the management might push Gill down at 3. KL has done extremely well at no 4 and no 5 in ODIs in past 2-3 years by avearging 41 and 56 at the respective positions but it makes little sense to bat him down the order when he needs match practice.

Deepak Chahar's case is also similar. Sustained a quadricep tear in February and was out of the action since then. He has been included in the reserves for Asia cup and the team managment will probably test his match fitness ahead of the big tournamnet. He is an asset to any t20 side. Since 2018, he has taken 42 wkts in Powerplay, the most by any bowler. He can also use the long handle well. ODI half centuries in SL, SA and a cameo against WI puts him ahead of other contemporaries at no 8 in the 50 over format. The series also provides great opportunity for someone like Sanju Samson. Having made his international debut here in 2015, he has gone on to play just 4 ODIs. Played a brilliant hand in one of the games in Carribean and put up some excellent glovework which proved crucial in deciding the fate of that game.

The Zimbabwean team will be without four big names against India; Blessing Muzarabani, Sean Williams, Wellington Masakadza and Skipper Craig Ervine are all out due to injury. When Zim was whitewashed by Afghanistan at home, they made some course corrections and appointed Dave Houghton to coach them again. He had coached them previously and was their former captain. They clinched both the T20i and ODI series against Bangladesh and have made it to the Super 12s for the t20 wc in Australia. Sikander Raza has been a star for them this year with 2 centuries and 2 half centuries. Innocent Kaia also registered a 100 against Bangladesh. ZIM have lost all the prevoius 12 encounters against India and have lost 9 consecutive ODIs against them at Harare.

Shubhman Gill: He had an exact average and SR of 102.5 in the 3 match ODI series against WI. He missed out on a well deserved maiden ton after he was stranded on 98* due to rain in the last odi and an unfortunate run out in the 1st ODI after reaching his 50. He also became the 2nd youngest Indian to score a ODI 50 in WI after Virat Kohli.

KL Rahul: There are plenty of reports of him opening the Innings and there can't be a better chance to pile up rains against the same opposition and at the same venue where you started your ODI career. Though his ODI nos are worst ( SR of 80 ) as an opnener but with debutant Tripathi, Samson and Hooda the middle order looks settled and well equiped with finishers for him to bat down the order.

Mohammad Siraj: It appears as if he has finally found his rythm after a horror IPL and a below par performance in the solitary test in Eng. He bowled brilliantly with the new ball in Eng and WI and has scalped 9 wkts in his last 5 odis at an eco of 5.2 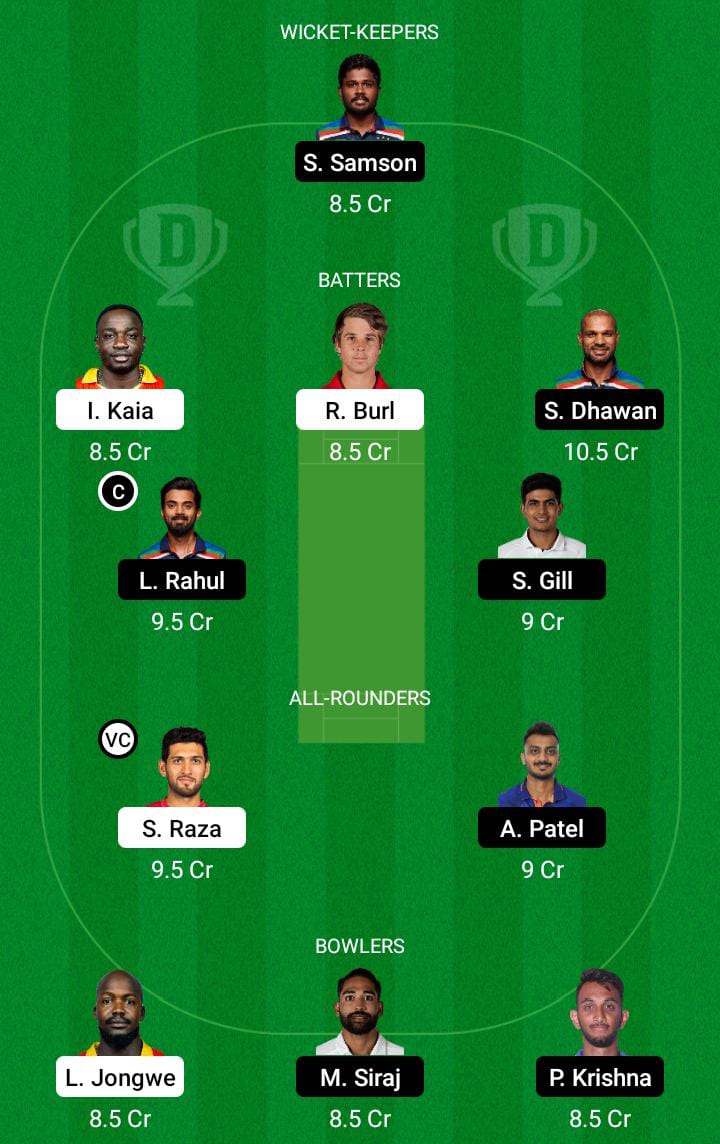 "We've gone out and we've played a good, aggressive brand of T20 cricket in particular"

MS Dhoni scored 56, 67* and 85* against Zimbabwe to end with an ODI average of 208 against them - the highest among any batter in the format.

Next to follow is KL Rahul, with an ODI average of 196 against Zimbabwe. #ZIMvIND pic.twitter.com/KOkFywKxgV

"Everybody who plays cricket wants to wear India colours. Being called up for the Indian team is a dream come true. Whenever I have played for Bengal I've given my all. Bengal team believed in me."#ZIMvIND