The defending champions Chennai Super Kings take on the Punjab Kings in match no 38 at the Wankhede Stadium. PBKS had a comfortable win over the men in yellow in their last encounter earlier in the season. Liam Livingtone was the star with the bat in that game. Punjab Kings are coming off from 2 forgettable losses against SRH & DC.  Against SRH they collapsed from 151-5 to 151 all out a blink of an eye whereas against Delhi, they put up their 4th lowest score in the IPL.  Liam Livingstone and Vidharba's star player Jitesh Sharma are the only bright spots in the middle order. Liam has 3 50s in his last 5 innings and Jitesh has scored 122 runs at a SR of 165. PBKS have lost 29 wkts in the middle overs which is most for any team. On the contrary, their scoring rate is 9.5 in the PP which was the best among all teams before the last game. Punjab have the luxury to try and change the lineup given the squad they have. Rishi Dhawan & Benny Howell should get a look in the 11 at the earliest.

Super Kings roughly needs 6 wins out of their remaining 7 games to qualify for Playoffs. A vintage MS Dhoni finsih helped them gain another 2 points in the last game against their arch rivals Mumbai Indians. What changed for CSK is their bowling in PP. In the 1st 4 games, they had picked up just 1 wkt in the PP. In the last 3 games, they have picked up 10 wkts courtesy Theekshana and Choudhary who have picked majority of the wkts. It would be interesting to see if CSK bring back Moeen in the 11 or persist with Santner.

(Capt) Shivam Dube: He has been a revelation this year and is the best CSK batter this season with 239 runs at a whooping SR of 161. He has scores of 49, 54 and 95* against RCB in the  where he displayed an amazing exhibition of six hitting.

(Capt) Maheesh Theekshana: He has played just 4 games so far and already has 4 wickets in Powerplay for CSK. His last 3 outings were really successful where he picked 7 wickets including a 4-fer against RCB.

Liam Livingstone: He had a tough outing last year with an average of just over 8 in 5 games. Liam was the highest scorer in The Hundred with 348 runs. He scored England's fastest ever international century when he reached the milestone from just 42 balls against Pakistan at Trent Bridge. With 60(32) and 2 wkts against CSK, a quickfire 60 against GT and another solo show in the last game against SRH proves he has really arrived and its just a glimpse of what we are going to witness. He has 3 50s  which is the most as a middle order batter in this season

Jitesh Sharma: 122 runs at a SR of 165 batting at 5/6 in this season. The wk batter from Vidarbha has produced a cameo in every outing so far.

Ruturaj Gaikwad: The orange cap winner of 2021 has had a outing to forget this season. He did show good signs against GT during his knock of 73.

Jonny Bairstow: He has not managed to put up a single show in his last 7-8 innings and its quite rare to keep a batter of his quality quite for too long. Wankhede might be the perfect venue for Biarstow and he has all the ability to replicate what his Eng's teammate Jos Buttler has done in this season. 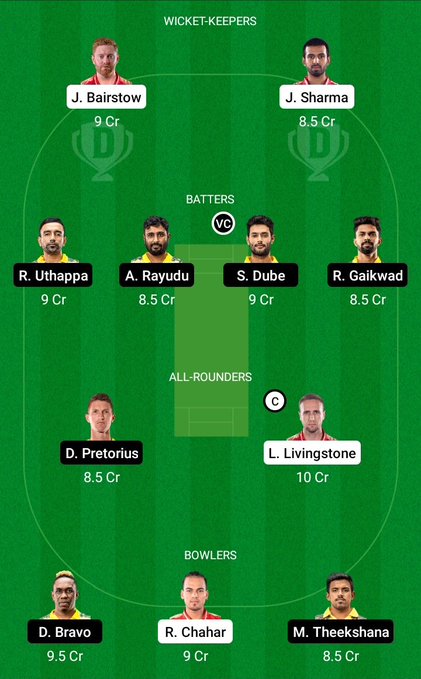