"NOT AGAIN". It is almost certain that almost every RCB fan will echo this sentiment after their team's fortunes depend on other results once again. Since 2020, RCB has done amazingly well in the 1st half by winning 5/7 games in all 3 seasons but their campaign just tapers off in the 2nd half and they lose momentum. This has cost the team dearly in last 2 seasons as they narrowly scraped through in 2020 with 14 points and couldn't end up in top 2 despite winning 9 games last season. Even if they win their last game their campaign could be well over if DC beat MI on saturday as there is massive difference of NRR between the 2 sides.

Opening partnership and scoring rate in PP has been RCB's achilees heel this season. They have the worst RR in PP ( 6.96). Kohli strikes at 113 while Faf fares even worse with 103. Another big issue infront of the team is Siraj's form. He has an eco of 9.9 in PP while it shoots up to 15 in death overs.

With top spot confirmed, there are reports GT could rest their key players. In that case, Rahmanullah Gurbaz should get a place in the 11. He is a hard hitting opening batter from Afghanistand and also is a part time wkt keeper. He strikes at over 150 in t20s and was impressive on his BPL and LPL debut.

Rashid Khan: It was about time for Rashid to show what he is capable to do with the bat. He was the stand in captain in the game against CSK and displayed his batting prowess while chasing and scored 40 off 21 balls. He again did what he has been doing in leagues like BBL and PSL all these years and smashed 31 of 11 deliveries to take GT to a memorable victory against SRH.  16 wkts at an eco of 6.9 are his stats in this season. Rashid has never finished a season with an eco of greater than 7 and became the 1st spinner to take 15 + wkts in 6 consecutive seasons. He has good h2h record against all RCB batters barring Maxwell.

Wanindu Hasaranga : 23 wkts at an eco of less than 8. Hasaranga has got a big wkt in every game and almost sealed the games against MI, RR, DC & CSK, SRH in RCB's favour with his bowling. He has been RCB's trump card and  justified RCB;s decision of spending a significant chunk of budget in acquiring  him.

Glenn Maxwell: RCB's MVP last season has been a little underwhelming with the bat but produced some economical and wkt taking spells in almost every game. He has got few starts this season but hasn't been succesful in converting them into big scores. He is striking at 166 with 228 runs from 10 innings.

Rahul Tewatia: Took GT through the finishing line in 5 games and also was the reason behind GT's win over RCB in the last encounter. 215 runs at a SR of almost 50 are his nos in this year's IPL.

Hardik Pandya: India's best all rounder had an outing to forget last year. Due to Injuries, Hardik has not been bowling and subsequently lost his place in the national side for these 2 reasons. This IPL is a great opportunity for him to win the trust back of the selectors and make a strong statement ahead of the t20 wc. In 2019 and 2020, Hardik scored the most runs in the death overs. He smashed 463 runs at a SR of 221 with 39 sixes. He started amazingly well  this season both with the bat and the ball but has not been the same in last 5 outings and scored just 47 runs. 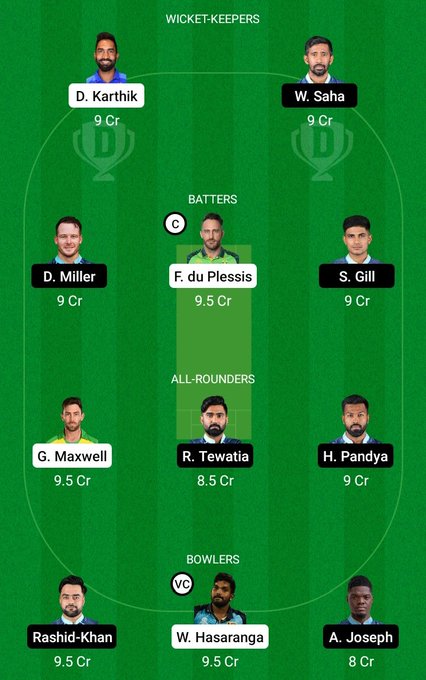