5 times champions Mumbai Indians are on the cusp of receiving a wooden spoon. One can say in hindsight this situation had not arised if MI weren't late in figuring out their best 11. Too many changes were made in the bowling department and Tim David was benched after a couple of failures. In view of the future, it looks a strong side with Brevis, Varma, Tim David and Stubbs who'll probabaly be the core of middle order and with the addition of Jofra, bowling department is only going to get strengthened. MI's position in points table should also be attributed to Rohit & Ishan's form. This was the season where MI needed their seniormost batters Rohit & Pollard to step up.

RCB have done their job by winning a virtual knockout against GT and now their fortunes totally depend on the result of MI vs DC encounter. DC get through the playoffs as their NRR is much superior than RCB. Things are looking positive in the DC Camp after last win against PBKS. Shaw will be back in the squad, Mitchell Marsh has played 2 back to back crucial knocks, Pant though has not scored a 50 but his SR for the season is 157 and Nortje has looked in great shape after returning from injury. MI have a great chance to level some past scores. In 2018, it was MI who needed a win in their last match against DC to sail through playoffs but they failed to score 18 in the last over

David Warner: One of the most consistent batters in the history of the league. Warner had marked his presence in this season with 3 back to back half centuries. He has 8 50+  and 2 40+ scores in his last 17 T20 innings. DC will miss the services of Shaw. Shaw & Warner are one of the most lethal opening pairs of the tournament. They have put up 4 consecutive scores of 50+ and that too at an excellent RR.

Tilak Verma: The U 19 star came into limelight after samshinh 215 runs in SMAT at a SR of 147. He has shattered many records in his debut season like youngest to score a 50 for MI, most runs in a season for a teenager, 7 30+ scores.

Rovman Powell: He had an amazing streak of 4 games where he scored 171 runs from 87 balls. 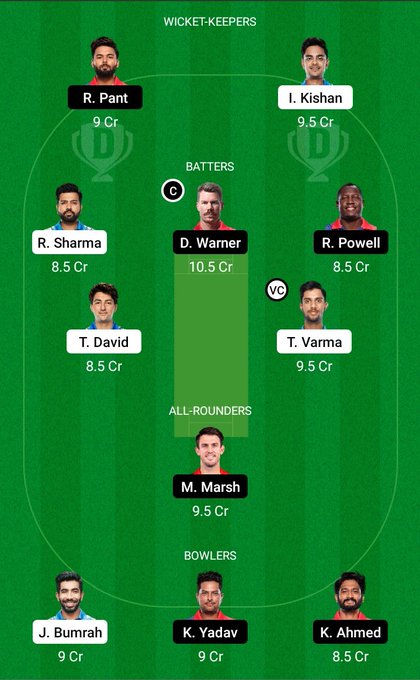