The Rajasthan Royals take on the Delhi Capitals in match no 33 at the Wankhede Stadium in Mumbai.

A powerpacked performance from Jos Buttler followed by a magical Yuzvendra Chahal sealed the game for RR in the last match against KKR where they almost slipped while defending 217. Powerplay has been RR's biggest strength so far. Jos Buttler alone has hit 14 of the 17 sixes in the 1st six overs. Since 2018, he has the best SR in this period. Death Overs is singlehandedly taken care by Shimron Hetmyrer who has scored the most runs and sixes in this period from 2021. In 2022, he has scored 152 runs at a SR of 249. So far, RR's other woes in opening and end overs have been overshadowed because of the brilliance of these 2 individuals. Padikkal and Riyan Parag have not contributed much in this season, Sanju has only couple of good knocks against his name. Obed McCoy's inclusion has certainly boosted their side. McCoy bowled brilliantly at the death in the series against Aus & SA and picked up back to back 4 fers in 2 t20is.

An underprepared DC absolutely rampaged PBKS to secure a 9 wkt victory in the last game. Axar Patel is back among the wkts who went wicket less in his 1st 4 games. DC now have the highest scoring rate in the Powerplay with 9.6. Middle order has been DC's achilees heel this time. None of their batters have managed to score a 50, Rovman Powell has been disappointing, Pant could not take DC to the finishing line against GT & RCB. Marsh, who was supposed to bat at 3 is down with Covid. This opens up a brilliant opportunity for Sarfaraz Khan. Perhaps, the biggest surprise this season was Khaleel's and Kuldeep's performance. Khaleel has been  economical  with the ball  so far and hasn't let DC miss the services of Nortje. Kuldeep on the other hand has taken 13 wkts in the middle overs.

Jos Buttler: Since 2018, Butler strikes at 150 in the Powerplay with 826 runs. Regarded as one of the most dangerous white ball batters in the world, he had a brilliant t20 wc where he scored a scintillating 100 against SL on a slow Sharjah Pitch and carried his form in the IPL where he scored another 100 in his 2nd game of the season, a 70 odd in the game vs RCB and a quickfire 50 in the powerplay against GT, and another 100 against KKR. He is now the orange cap holder with 375 runs.

Prithvi Shaw: What makes Shaw different from the current crop of openers? Since Shaw’s IPL debut in 2018, he has scored 1081 runs in the Powerplay at a whopping SR of 151. No one has scored more runs than him at a better SR. The next best on this list is Jos Butler with 826 runs at an SR of 150. Shaw already has 2 half centuries in this season.

David Warner: One of the most consistent batters in the history of the league. Warner has marked his presence in this season with 3 back to back half centuries. He has 6 50+  and one 49 in his last 10 T20 innings. Shaw & Warner are one of the most lethal opening pairs of the tournament. They have now put up 4 consecutive scores of 50+ and that too at an excellent RR.

Yuzvendra Chahal: Purple cap holder with 17 wkts at an eco of  7.3. The spin duo of Ashwin & Chahal have been RR's biggest strength in the middle overs. Chahal has taken 12 wkts in the middle overs, just behind Kuldeep who has scalped 13 wkts. A hattrick in the dying hours of the last game sealed the game in RR's favour.

Lalit Yadav: Picked 2 wkts in the last match and a handy middle order batter. Pulled off a brilliant win against MI with the the help of Axar & Thakur.

Trent Boult: He has taken most wkts in PP since 2020. Could cause early problems for the opening pair of Delhi 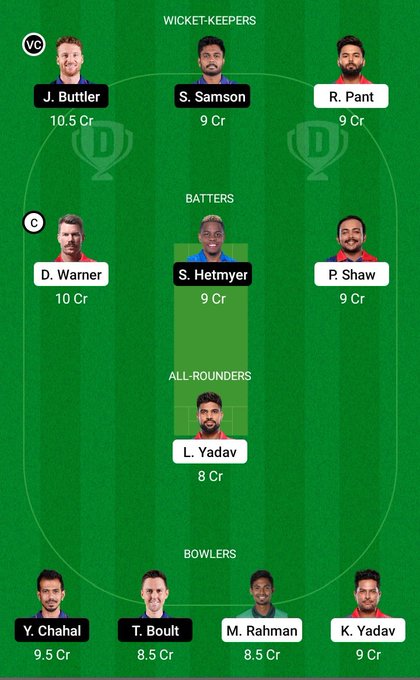 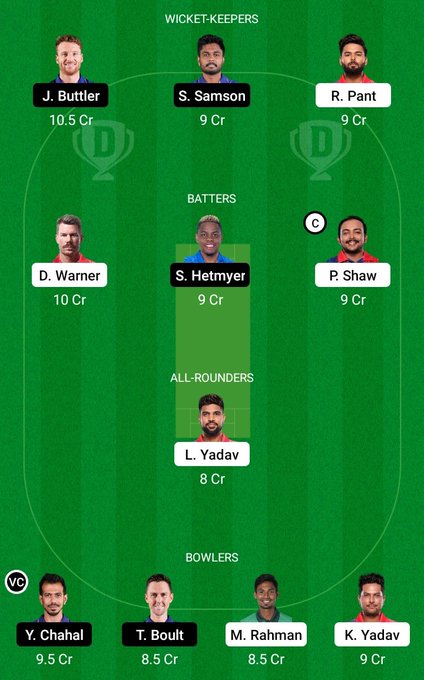