The Punjab Kings take on the Gujarat Titans in match no 16 of 2022 IPL at the Brabourne Stadium.

Gujarat Titans have made a flying start to their campaign and are the only unbeaten team in the tournament. Their success majorly lies on the backdrop of pacers Shami and Lockie  who have taken 5 and 4 wkts at an economy of 6.9 and 6.5 respectively. A classic Tewatia style finish in the 1st game and a blistering knock by Shubhman Gill have been the other highlights so far. Hardik Pandya so far has appeared to be a very calm a and composed leader while marshalling his troops on the field. The only weakness so far has been the top order. Matthew Wade and Vijay Shankar have scored a combined 48 runs in 57 balls. Gujarat have Rahmanullah Gurbaz who is a wk batter from Afganistan.  He is prolific in the T20 format having scored over 1600 runs at a strike rate of 151.8. He has made an immediate impact in leagues around the world by scoring good knocks on his debut in the BPL and the LPL

Punjab Kings are coming off a memorable win against the defending champions Chennai Super Kings. Liam Livingstone has finally arrived in the IPL as he blasted his way to a 32 ball 60 which included 5 monstrous maximums. He even displayed his brilliance with the ball by taking 2 wickets. Punjab have a good headache ahead of them to slot Jonny Bairstow in the 11. There are 2 possibilities - Either he straightaway comes in for Bhanuka Rajapaksa who has hardly put a foot wrong or PBKS drop Odean Smith. The last option is highly unlikey to happen as it will leave them with a long tail and only 4 bowling options.

Punjab Kings: Jonny Bairstow will most probably make his debut against Gujarat Titans. Nathan Ellis has joined the squad.

IPL is returning to Brabourne Stadium after 2014/15.

Mayank Agarwal: 865 runs at a SR of 147 in the last 2 editions. No batter scored more runs than him at a better SR. He has had 3 consecutive failures, and in all possibility today could be his day.

Shikhar Dhawan: Since his switch to Delhi in 2019, Dhawan has recorded over 1818 runs in the last 4 editions thus making him one of the most consistent players in the league.  Both Mayank and Dhawan are yet to fire in this season. He has accumulated most runs in the powerplay in this period with 694 runs.

Hardik Pandya: India's best all rounder had an outing to forget last year. Due to Injuries, Hardik has not been bowling and subsequently lost his place in the national side for these 2 reasons. This IPL is a great opportunity for him to win the trust back of the selectors and make a strong statement ahead of the t20 wc. In 2019 and 2020, Hardik scored the most runs in the death overs. He smashed 463 runs at a SR of 221 with 39 sixes. He has started decently in his 1st 2 games both with the bat and the ball. He gave only 22 runs in his last game and was economical in the 1st game as well untill the last over spoiled his figures.

Mohammad Shami: Since the last season, Mohammad Shami has picked up 24 wkts at an eco of 7.5. GT would be hoping for an another Powerplay masterclass by him just like in the game against Lucknow.

Liam Livingstone: He had a tough outing last year with an average of just over 8 in 5 games. Liam was the highest scorer in The Hundred with 348 runs. He scored England's fastest ever international century when he reached the milestone from just 42 balls against Pakistan at Trent Bridge. With 60(32) and 2 wkts this could be just a glimpse of what we are going to witness in this season.

David Miller: One of the most exlosive white ball batter when he is on song. He has fared well in the 2 outings so far with 50 runs at a SR of 139. Miller has a SR of 182 in the death overs. 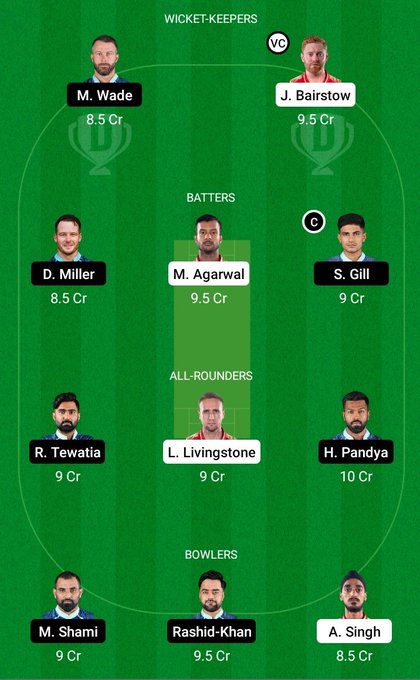