LSG's one foot is in playoffs and today's win will seal their spot. Mentor Gambhir blasted the team for giving up and not fighting after they were all out on 82 while chasing 144 in the last match. LSG bat deep but they lack stable performers in the middle order and apart from Hooda everyone's lacked consistency. The openers have top scored 9 out of 12 times. On the bowling front, LSG have done a remarkable job in containing the opposition in middle overs. They have the best RR and Krunal Pandya has the 2nd best eco for a spinner after Sunil Narine. Left arm pacer Mohsin Khan is one of the finds of the season and has the best eco for a pacer who has bowled min 100 balls. It will be interesting to see if LSG bring back Bishnoi in the 11 or continue to give Karan Sharma an another go in the middle order.

RR will be missing their gun finisher Hetmyer who had flown back home for paternity leave. Hetmyer has been the leagues's best batsman in end overs. Since 2021, he has scored 343 runs at a SR of 207 and this year he has scored 210 runs at a SR of 214. The management has to trust RVD at 3/4 and not underutilize his hitting abilities like they did in last match where he hardly faced any deliveries in the end overs. Buttler's drop in form was inevitable and expecting the same from him for the duration of the league stage is foolish. There has been an encouraging development for RR in the last two innings when Jaiswal or Padikkal have each contributed.

24 IPL games have been played at Brabourne.
Teams batting 1st have won  13/21 games.

Jason Holder: One of the most improved t20 cricketers in the recent times. Holder adds immense value to this Lucknow side both with the bat and the ball. He has taken 13 wkts at an eco of 9.3 and 12 wkts have come in the middle and the death overs.

Jos Buttler: Since 2018, Butler strikes at 145 in the Powerplay at an average of 54  with 929 runs. Regarded as one of the most dangerous white ball batters in the world, he had a brilliant t20 wc where he scored a scintillating 100 against SL on a slow Sharjah Pitch and carried his form in the IPL where he scored another 100 in his 2nd game of the season, a 70 odd in the game vs RCB and a quickfire 50 in the powerplay against GT, and another 2 100s against KKR & DC. He is now the orange cap holder with 625 runs and has hit 37 sixes.

Yuzvendra Chahal: He has lost his Purple cap to ex teammate Hasaranga and may reclaim it again in this game. He has taken 23 wkts at an eco of  7.3. The spin duo of Ashwin & Chahal have been RR's biggest strength in the middle overs. Chahal has taken 17 wkts in the middle overs & tied with Kuldeep who has also scalped 17 wkts. RR have been using him wisely by bowling his 2 overs after the 14th over. He bowled brilliantly in the 18th over of  few games

Mohsin Khan: He has the best economy for a pacer in this season ( min 100 balls).  He has 10 wkts in last 5 games and he could well cause trouble for the RR batters with his hit the deck style of bowling

Ravi Ashwin has had a much better season with the bat and with some favourable match ups while bowling he'll most probably end up contributing handsomely in both departments. 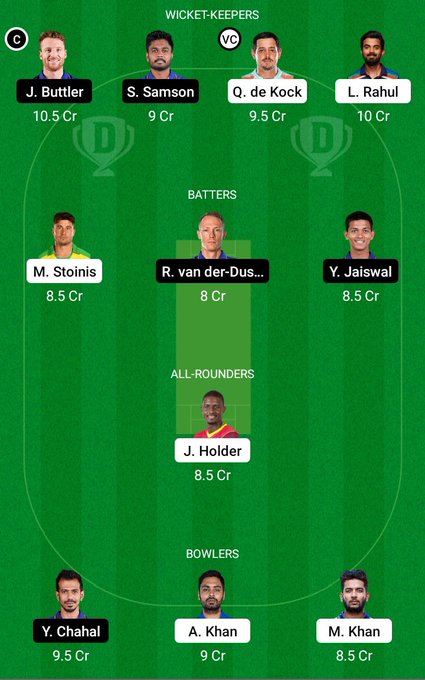 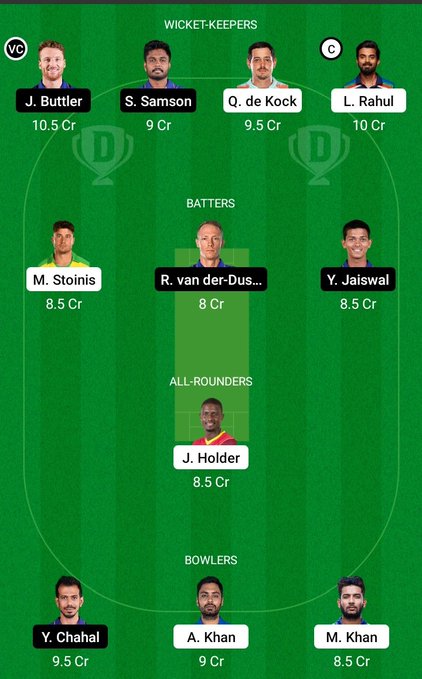