"3rd time Lucky ?" This is RCB's 3rd consecutive playoff appearance, but they were unable to advance beyond the eliminator in the last two seasons. This time they have a more balanced 11 and it won't be wrong to say they are favourites against LSG in the eliminator. So, what has clicked for RCB this season ? For year's RCB lacked a good finisher at 6 and 7. This time DK and Shahbaz made sure they"ll bridge that gap and have put up 287 and 207 runs respectively. Glenn Maxwell has been one of their crucial assets in PP and played the role of 6th bowler to utmost perfection. Though there are few weak links like Scoring rate in PP ( 2nd worst after SRH ) and death overs ( conceded most sixes in death overs ) but Kohli's innings in last game must have brought a huge sigh of relief in their camp. Last time RCB played at Eden, he registered his 5th IPL 100. RCB managed to beat LSG in the league stage. The main reason behind that win after a shaky start was Faf du Plessis' assault on Ravi Bishnoi in middle overs. He did not let the scoring rate to dip and took 34 runs against the leggie to put up a fighting total of 180 odd.

LSG had a huge opportunity to end up in top 2 but their campaign just faltered in their last 3 games where they lost 2 and narrowely escaped a loss against KKR. These are not encouraging signs at the backend of the tournament as momentum plays a big role going into playoffs.  Mentor Gambhir blasted the team for giving up and not fighting after they were all out on 82 while chasing 144 in the match against GT. LSG bat deep but they lack stable performers in the middle order and apart from Hooda everyone's lacked consistency. The openers have top scored 10 out of 14 times. On the bowling front, LSG have done a remarkable job in containing the opposition in middle overs. They have the best RR and Krunal Pandya has the 2nd best eco for a spinner after Sunil Narine. Left arm pacer Mohsin Khan is one of the finds of the season and has the best eco for a pacer who has bowled min 100 balls.

RCB beat LSG by 18 runs in the league stage. Faf du Plessis top scored with 96 and Hazlewood picked up 4 wkts.

Wanindu Hasaranga : 24 wkts at an eco of 7.4. Hasaranga has got a big wkt in every game and almost sealed the games against MI, RR, DC & CSK, SRH in RCB's favour with his bowling. He has been RCB's trump card and  justified RCB;s decision of spending a significant chunk of budget in acquiring  him.

Glenn Maxwell: RCB's MVP last season has got few starts this season and is striking at 173 with 268 runs from 11 innings. He has the best eco for a spinner in PP (6.2)

Deepak Hooda: He is the 3rd highest Indian run scorer in this tournamnet and has the most runs for an Indian middle order batter with 4 50+ scores.

Dinesh Karthik: He has been RCB's crisis man this year and bailed them out on numerous occasions. He has scored 287 runs at a SR of 19.

Mohsin Khan: He has the best eco for a seamer in this season (5.9) 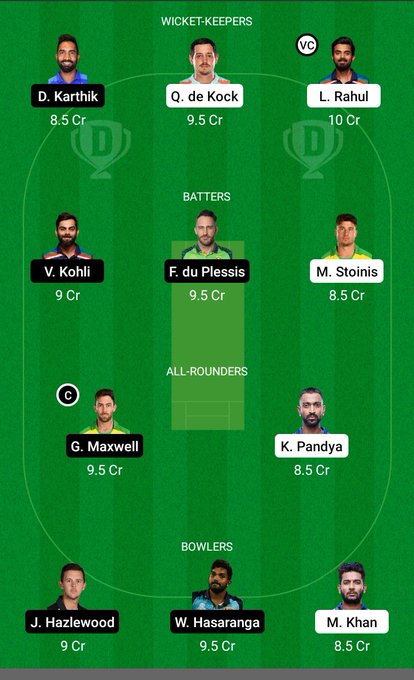 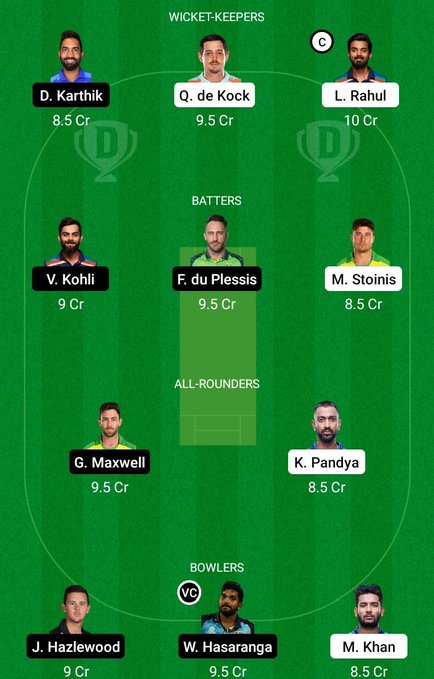