RCB's biggest concern is it's top order and scoring rate in Powerplay. Anuj Rawat has scored 77 runs at a SR of 93, the other opener Faf du plessis fares even worse with 104 runs at a SR of 85. Virat Kohli strikes at 110 having scored 61 runs. RCB have the  worst scoring rate in the powerplay with 6.58 and have lost 17 wkts. Another department where RCB have fared poorly is the the death bowling. Before the game against Lucknow, they had picked up only 5 wkts (least) and conceded runs at 13.2 (second worst). Dinesh Karthik, Shahbaz Ahmed in the batting department have been the only bright spots so far. DK was averaging 210 after 6 games and his SR was near 200 but he has not been able to do repeat it in last 4 games. He has been having a phenomenal season and has looked in zen mode right from ball 1. RCB have done the right thing in promoting Kohli at the top and slot Mahipal Lomror lower down the order. The latter is expected to come good against the duo of Santner & Jadeja. After failing to to register double digits in 3 consecutive innings, Kohli got a half century but that was his slowest one in all t20s. RCB need to win 3/4 games with better NRR to improve their chances for playing qualifiers.

If the Super Kings win all their remaining games, they atleast have a decent chance of qualifying for the playoffs. A vintage MS Dhoni finish helped them gain another 2 points in the  game against their arch rivals Mumbai Indians but probably left it little too late for him against PBKS. What changed for CSK is their bowling in PP. In the 1st 4 games, they had picked up just 1 wkt in the PP. In the last 5 games, they have picked up 13 wkts courtesy Theekshana and Choudhary who have picked majority of the wkts. It would be interesting to see if CSK bring back Moeen in the 11 or persist with Santner. CSK had announced a major change before the last game, that is, Dhoni is back as the skipper. It will be interesting to see whether this changes the fortunes of the side, who are on the verge of elimination.

Ruturaj Gaikwad: Pune is Ruturaj's home groung and no wonder he has registered scores of 73 and 99 in the 2 games he has played here compared to 65 runs in 7 innings in other venues.

Wanindu Hasaranga: 15 wkts at an eco of 8. Hasaranga has got a big wkt in almost every game and almost sealed the games against MI, RR and DC in RCB's favour with his bowling.

Glenn Maxwell: RCB's MVP last season, he is striking at 178 with 157 runs so far in this season. Apart from Delhi, he hasn't scored a big knock in this season. Though his h2h record against Jadeja is not good, he remains the RCB's best bet to counter the spin trio of Theekshana, Santner and Jadeja.

Maheesh Theekshana: He has played just 5 games so far and already has 5 wickets in Powerplay for CSK. His last 3 outings before the game against PBKS were really successful where he picked 7 wickets including a 4-fer against RCB. 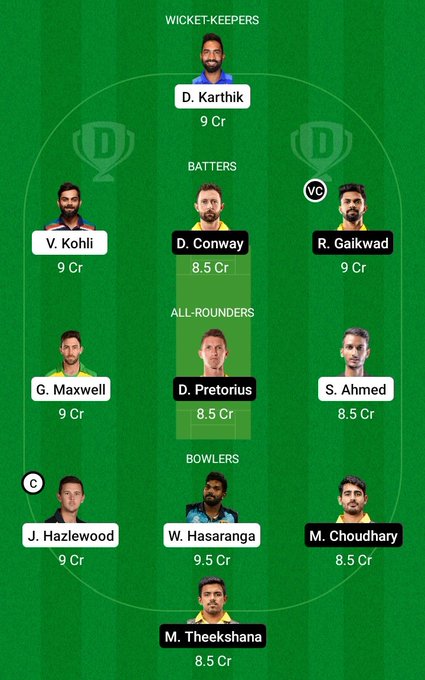