The Kolkata Knight Riders take on the Gujarat Titans in match no 35 at the DY Patil Stadium.

After winning 3 out of the 1st 4 games, KKR have now lost 3 consecutive games agaisnt DC, SRH and RR. The curse of Brabourne continues as KKR have lost all the 5 games played at that venue. Batting has been a major let down so far for with no or little contributions from the likes of Rahane, V Iyer,  Nitish Rana apart from one individual performance in 5-6 games. They have lost 13 wkts in the Powerplay and have not crossed 50 since that opening game against CSK.  Add to that, there has been a stark contrast between their performance with the ball in the powerplay and at the death. Pat Cummins has conceded 190 runs in the 16 overs he has bowled, Varun Chakravarty had conceded runs at an eco of 10  only once in 35 matches before conceding it in consecutive games against DC,SRH and went at an eco of 15 against RR. Sunil Narine is a lone bright spot in the bowling with an economy of 5 in 6 games. Tim Southee must come in the playing 11 at the expense of Pat Cummins. Southee is a improved bowler in this format and has done well in the Powerplay.

Declared as one of the worst teams after auctions,  GT have silenced every critic by being the table toppers. Captain Hardik Pandya has led from the front in both the departments. Tewatia has done his thing in 2 games, Miller has  done exceedingly well as the Seniormost batter in the side and the duo of Shami - Lockie continue to pick up wkts. Just like Ayush Badoni for Lucknow and Jitesh Sharma for Punjab, GT have unearthed a  gem in Abhinav Manohar. GT have one major chink in their armour and that is the top 3 and only Shubhman Gill has scored some runs. They have hit only one six in the Powerplay Its the right time to rope Rahmanullah Gurbaz in the 11

Shreyas Iyer: Since Nov 2019, Iyer has scored 705 runs for India at a SR of 150. He has performed in almost every series and was the man of the series against SL 2 months ago. He  failed to make any impact in the initial games but came back strong with a 50 against DD and an 85 against RR in the last game

Andre Russell: The 2 time MVP of the IPL was quiet with the bat in the past 2 seasons but he displayed a scintillating show of power hitting against PBKS and yet again proved why he is one of the most dangerous players in t20 cricket. He scored 49 in the game against SRH and is also contributing with the ball by bowling atleast 2 overs in every game. Since 2018, Russell strikes at 225 at the death with 59 sixes. He has hit 16 sixes so far.

Rashid Khan: He was the stand in captain in last game and displayed his prowess with the bat while chasing and scored 40 off 21 balls. 6 wkts at an eco of 6.7 are his stats in this season. Rashid has never finished a season with an eco of greater than 7.

Hardik Pandya: India's best all rounder had an outing to forget last year. Due to Injuries, Hardik has not been bowling and subsequently lost his place in the national side for these 2 reasons. This IPL is a great opportunity for him to win the trust back of the selectors and make a strong statement ahead of the t20 wc. In 2019 and 2020, Hardik scored the most runs in the death overs. He smashed 463 runs at a SR of 221 with 39 sixes. He has started amazingly well  this season both with the bat and the ball. He was the 3rd highest scorer of the season with 228 runs before he missed the last game against CSK.

Rahmanullah Gurbaz:  He is a wk batter from Afganistan. He is prolific in the T20 format having scored over 1600 runs at a strike rate of 151.8. He has made an immediate impact in leagues around the world by scoring good knocks on his debut in the BPL and the LPL 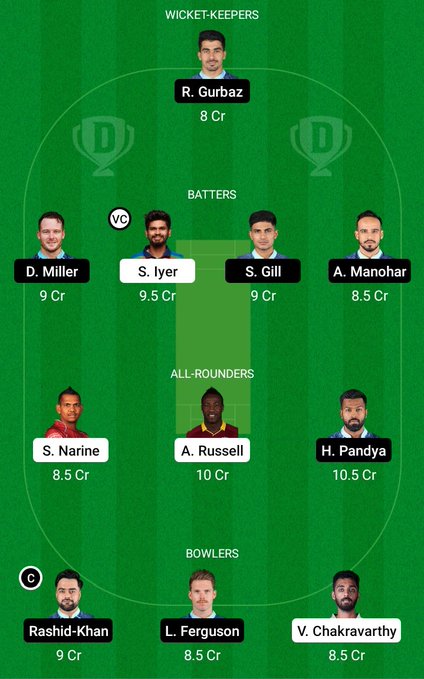