The stage is set in Mohali as one of the world's most celebrated cricketers of this geneartion is set to play his 100th Test against Sri Lanka. Virat Kohli becomes the 12th Indian and overall the "71st" cricketer to join this illustrious list. The occasion also marks Rohit Sharma's 1st Test as a captain and he becomes the 35th player to do so.

It has been a memorable home season for India. They have won all 12 LOIs and won 1-0 against New Zealand in Tests. The streak will only  get better if they wrap up this series with a 2-0 victory. India suffered a 2-1 loss in South Africa in Tests and 3-0 in ODIs amidst this run at home. Sri Lanka have never won a Test against India in India. And with the kind of record the hosts have at home, its going to be a huge challenge for Karunaratne's men.

Coming into the series, India have undergone a huge shift. Virat Kohli is no longer the captain. They will be without Ajinkya Rahane and Cheteshwar Pujara who have been the mainstays in the middle order for the past decade. Ishant Sharma and Saha are not on the management's radar and it's said their Test careers are practically over. The hosts have a new vice-captain in Jasprit Bumrah as he becomes the first fast bolwer after Kapil Dev to don the leadership role. India will also be without the man with the golden arm Axar Patel who eats 5-fers for breakfast, lunch and dinner. Shubhman Gill is set to take the no. 3 position while Hanuma Vihari is should be slotted at 5 as per reports. Management could well spring up a surprise with Shreyas Iyer considering his recent form and his debut ton at Kanpur against the Kiwis.  It will be interesting to see how the prolific duo of Ashwin-Jadeja shape up going into the 1st Test. Both are returning from injuries with no red ball practice.

Sri Lanka, on the other hand, suffered a blow as Ramesh Mendis won't be available. He has taken 26 wickets in his 4 Tests. Visitors have a formiddable batting line up and have started their WTC cycle on a winning note with a 2-0 win over West Indies. Their biggest challenge would be facing the Indian quicks. Umesh Yadav has taken 98 wickets at an impressive strike rate of 47 at home. Mohammed Shami's stats are even better with 62 wickets at 42 SR. Addition of Bumrah and Siraj in reserves just makes it one of the most potent bowling attacks.

Expect equal help for spinners on a fast-paced Mohali pitch. Strike Rate of spinners is only slightly higher at 76 compared to pacers who strike every 70 balls. This is an encouraging ratio for spinners. 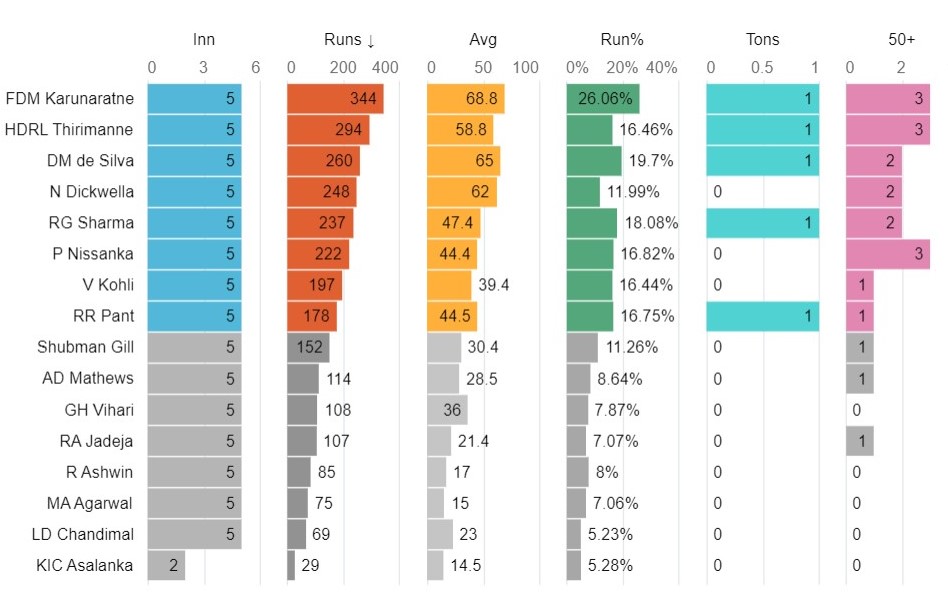 Hanuma Vihari: The FC giant has played only one Test in India since his debut in 2018. In and out of the side, constantly fighting for his spot, this could be his moment to seal that middle order spot. Vihari was ignored for New Zealand series and then drafted on A tour to South Africa. He came in for Kohli in the 2nd Test at Johannesburg where he scored a gritty 40*.

Ravindra Jadeja: Since 2019, he has played only 6 Tests in India and scalped 18 wickets at an average of 31 and strike rate of 76. He missed the entire series against England and one Test vs New Zealand due to injuries. The allrounder is also averaging 37 with the bat in the meantime with 7 fifties. He has played numerous crucial knocks lower down and his batting graph is only going upwards.

Mayank Agarwal: Lost his place in Australia and then in England before 1st Test, Mayank came back strong with a 100 against New Zealand. With KL Rahul and Priyank Panchal in the mix, the opening spot is becoming more competetive. Mayank averages a mamoth 83.9 at home in 10 innings with 4 hundreds. Rohit at the other end averages 79 at home with 7 tons. Thus making them one of the deadliest opening pair in Tests at home.

Dimuth Karunaratne: The Sri Lanka captain had a memorable 2021 as he was nominated for ICC's Test Cricketer of the Year award and was also named in the ICC Test Team of the Year. He ammased over 900 runs with 4 centuries. He is their 2nd most experienced batsman in the side with 74 Tests and is averaging over 44 in last 5 years which includes 9 tons. He will partner the young Pathum Nissanka who has started his International career on a brilliant note with 427 runs from 6 Tests.

Dhananjaya de Silva: One of the positives from Sri Lanka's last tour to India was DDS' knock of 119*. He is one of the pillars of Lankan batting in the middle order and is averaging just a notch below 40. He has taken his batting on another level in past 2 years. He is averaging 65 in his last 13 innings with 2 hundreds and 4 fifties.

Praveen Jayawickrama: Another youngster who has started his International career with a bang. He has scalped 18 wickets in his 3 Tests. The spin duo of Jayawickrama and Embuldeniya have an uphill task ahead of them against a batting line up of Rohit, Mayank and Pant who are one of the best players of spin and have shown no mercy on any visiting spinner with their attacking game. 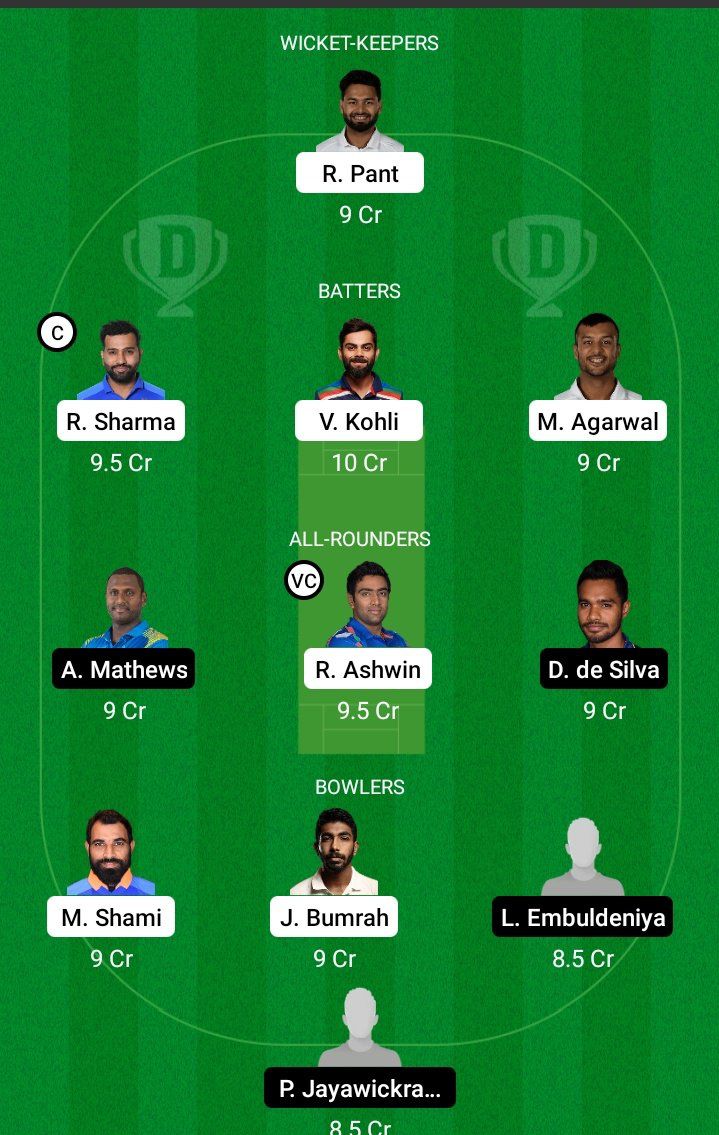