Declared as one of the worst teams after auctions,  GT have silenced every critic by being the table toppers. Captain Hardik Pandya has led from the front in both the departments. Tewatia has done his thing in 2 games, Miller has  done exceedingly well as the Seniormost batter in the side and the duo of Shami - Lockie continue to pick up wkts. Just like Ayush Badoni for Lucknow and Jitesh Sharma for Punjab, GT have unearthed a  gem in Abhinav Manohar. GT have one major chink in their armour and that is the top 3 and only Shubhman Gill has scored some runs. They have hit only one six in the Powerplay Its the right time to rope Rahmanullah Gurbaz in the 11.  He is a wk batter from Afganistan. He is prolific in the T20 format having scored over 1600 runs at a strike rate of 151.8. He has made an immediate impact in leagues around the world by scoring good knocks on his debut in the BPL and the LPL.

It won't be wrong to say SRH are by far the best bowling unit in this tournamnet.  SRH's management should be lauded for having faith in Bhuvi and Natarajan during auctions given their injury concerns and form in last 18 months. T Natarajan has led from the front with 15 wkts, Fast bowling sensation Umran Malik has 10 wkts after a shaky start to the season. Suchit has filled in for Sundar in his absence. Jansen ran through RCB's and KKR's top order in back to back games and Bhuvi has scalped 9 wkts at an eco of 7.4. SRH are the best bowling unit in death overs with 21 wkts. Coming to the batting department, SRH are the worst performers in PP with a scoring rate of 6.52. Kane Williamson has been a major let down and hasn't contributed at all apart from a 50 against GT

Teams batting 1st have won the last 5 matches at Wankhede

SRH beat GT by 8 wkts in the last game.

Rahul Tripathi: Tripathi burst onto the scene in 2017 while opening for Rising Pune Supergiant. He racked up 391 runs at an impressive strike rate of 146. He had a a couple of off seasons with RR but was back at his best in KKR. Donning a new role, Tripathi batted in middle order and amassed 397 runs at a SR of 140. No wonder he fetched 8.5 crores in the auctions as he possesses the unique ability to attack from ball one.He was the top scorer in the 2nd game with a 30 ball 44 and hit a 15 ball 39 against Chennai, followed it up with a 37 ball 71 while chasing against KKR, a 22 ball 34 vs PBKS in the last game.  Tripathi has the 5th best SR (150.1) since 2021 for batters with minimum of 450 runs

Aiden Markram: In the past one year, Markram has scored 570 runs for SA at a SR of 148. He had a very good outing in t20 wc and was featured in ICC's team of the tournament. Markram is also a useful part time off spinner and does the job well in Powerplay. He was the top scorer for SRH in the 1st game and scored a 50, registered his 2nd one in the game against KKR. and remained not out on 41 against PBKS.

Rashid Khan: He was the stand in captain in the game against CSK and displayed his prowess with the bat while chasing and scored 40 off 21 balls. 8 wkts at an eco of 6.5 are his stats in this season. Rashid has never finished a season with an eco of greater than 7.

Hardik Pandya: India's best all rounder had an outing to forget last year. Due to Injuries, Hardik has not been bowling and subsequently lost his place in the national side for these 2 reasons. This IPL is a great opportunity for him to win the trust back of the selectors and make a strong statement ahead of the t20 wc. In 2019 and 2020, Hardik scored the most runs in the death overs. He smashed 463 runs at a SR of 221 with 39 sixes. He has started amazingly well  this season both with the bat and the ball. He is the 4th highest scorer of the season with 295 runs.

Prediction: GT will beat SRH if they bowl 1st 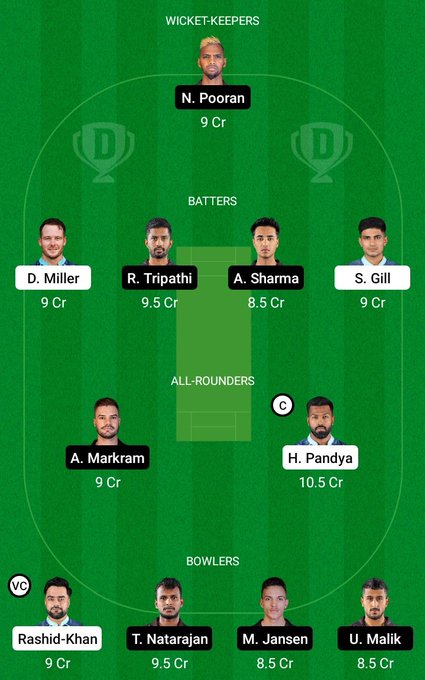 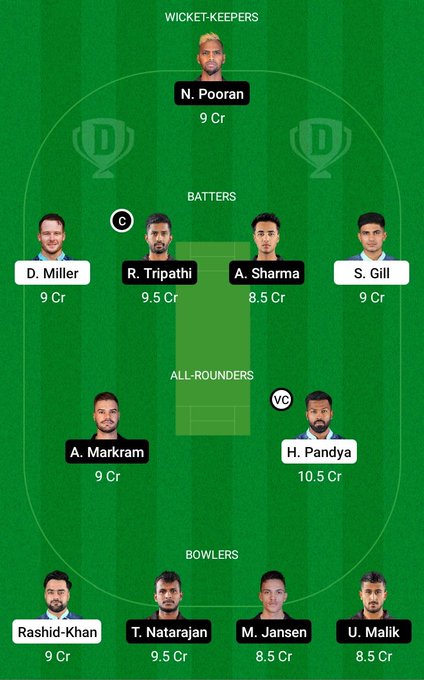