Lucknow are almost knocking on the doors of playoffs with 14 points and a win against KKR they'll have their one foot in the last 4. KKR on the other hand can't afford to lose any of their games and need 4/4 wins to have a chance finish in top 4. KKR had a solid start to their campaign by winning 3 out of the 1st 4 games but ended up losing 5 consecutive games on the trott. A 7 wkt victory over Rajasthan has given their campaign some hope but the task ahead is daunting and impossible given the resources they have at the disposal. KKR have tried 5-6 opening combinations and we could see another new opening pair taking guard on Saturday. KKR have lost 20 wkts in PP which is most by any side in this season. Middle order looks better with the likes of Rana & Rinku Singh coming good in the last few games. Sunil Narine has been a lone bright spot in the middle overs. He hasn't conceded runs in excess of 6 rpo in 8 games and his worst outing was 0/31 in 4 overs.

Just like KKR, LSG too won 3 out of their 1st 4 games. They too faltered against RR & RCB but came by strong by defeating MI twice, PBKS & DC. LSG did an amazing job in the auctions by banking on all rounders and hence they have 9 bowling options in the 11. Pace department has come good in absence of Avesh Khan with Chameera, Mohsin and Holder bowling brilliantly in different phases of the game. LSG have just 1 chink in their armour and thats a stable no 3 in the batting department. Ewin Lewis could make way for Marcus Stoinis.

Andre Russell: The 2 time MVP of the IPL was quiet with the bat in the past 2 seasons but he displayed a scintillating show of power hitting against PBKS and yet again proved why he is one of the most dangerous players in t20 cricket. He scored 49 in the game against SRH, and another 40 odd vs GT and is also contributing with the ball by bowling atleast 2 overs in every game. he took 4 wkts in the last over against GT game. Russell strikes at 209 at the death with 74 sixes. He has hit 22 sixes so far.

Jason Holder/Nitish Rana: One of the most improved t20 cricketers in the recent times. Holder adds immense value to this Lucknow side both with the bat and the ball. He has taken 9 wkts at an eco of 9 and all the wkts have come in the middle and the death overs. Rana has scored 179 runs at a SR of 145 in his last 5 innings

Krunal Pandya: He has the best economy rate in this season after Sunil Narine.

Mohsin Khan has 8 wkts in last 4 games and he could well cause trouble for the KKR batters with his hit the deck style of bowling. 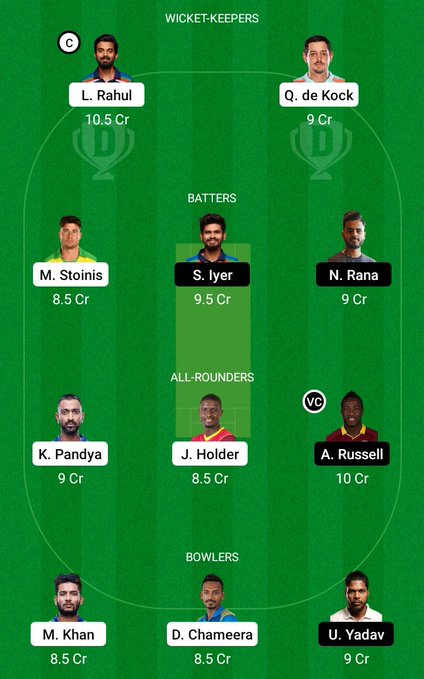 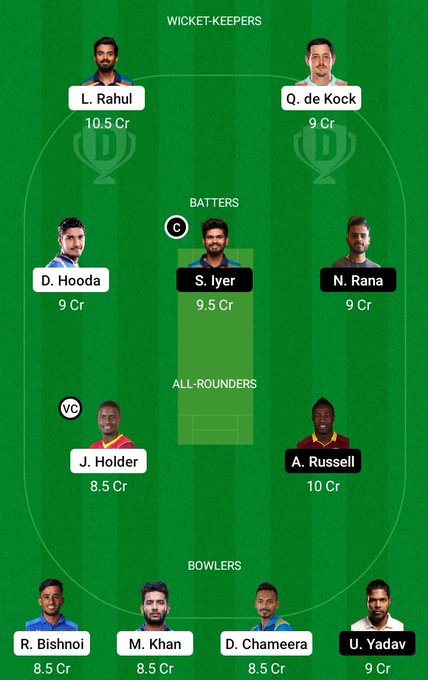