Its the battle of 2 former champions. The Kolkata Knight Riders take on the Sunrisers Hyderabad in match no 25 at the Brabourne Stadium.

SRH's campaign had a shaky start as they lost their 1st 2 opening games but fought back well to win their next 2 games against SRH and GT. Bowling has been their biggest strength as they managed to restrict both teams for a modest total. Natarajan has found his rythm back after missing out in the least season. He has picked up 8 wickets so far and has been brilliant at the death. SRH have been dealt with 2 massive blows, Tripathi and Sundar got injured in the last game. While there is no major update on Tripathi, Sundar is out for a week due to a finger injury. SRH would look to include Abdul Samad in place of him.

After 2 consecutive wins, KKR's campaign was haulted by DC as they posted the 2nd highest total of the season so far. Pat Cummins conceded 50 runs for the 2nd consecutive time and their Powerplay star Umesh Yadav too was taken apart in the end overs. But Sunil Narine has stood out this season with spells of  0/15, 1/12 & 1/23, 0/26, 2/21 and has a dot % of 46. Along with death bowling, opening partnership is a major concern and KKR dont have any good backup options apart from Aaron Finch who is unlikely to get a look in the 11. Rahul Tripathi's inclusion is a must since he has a good record against spinners especially Sunil Narine. KKR 's spinners vs SRH's middle order of Markram & Pooran will decide the result of the contest.

-Nicholas Pooran has the most number of ducks in IPL since 2020 (6).
-Washington Sundar has 8 wickets in Powerplay since 2020 (joint-highest for a spinner)
-Sunil Narine has conceded only 2 sixes in this season and is the most economical bowler overall so far.

Shreyas Iyer: Since Nov 2019, Iyer has scored 705 runs for India at a SR of 150. He has performed in almost every series and was the man of the series against SL 2 months ago. He has failed to make any impact so far in this year's IPL but found his way to half century against Delhi in the last game.

Andre Russell: The 2 time MVP of the IPL was quiet with the bat in the past 2 seasons but he displayed a scintillating show of power hitting against PBKS and yet again proved why he is one of the most dangerous players in t20 cricket.  Russell strikes at 229 at the death since 2018. A fit Russell adds immense value to the KKR side as he bowls his quota of 4 overs as well.

Kane Williamson: The IPL marked the return of Kane Williamson to competetive cricket after 4 months and the franchise would be hoping for their skipper to repeat his 2018 heroics. Kane Williamson has been dismissed cheaply in the 1st 2 innings with the 1st dismissal being a controversial one. He had another poor outing last game when he ended his innings at a SR of 80 but the for a player of his class it could take only one innings to turn things around and it happenend in the last game against GT where he was awarded MoM award for his 57

Abhishek Sharma: The young southpaw was the top scorer in the chase against CSK with 75, repeated with a 32 ball 42 against GT and proved why SRH went onto aggresively bid for him during the auctions

T Natarajan: He has picked 8 wickets from 4 games.

Nicholas Pooran: Last year was a horror outing for the southpaw from Trinidad. This year he has looked in a good shape and today might just get a big innings under his belt.

KKR will win the match with Umesh and Narine proving to be MVP's in the bowling. 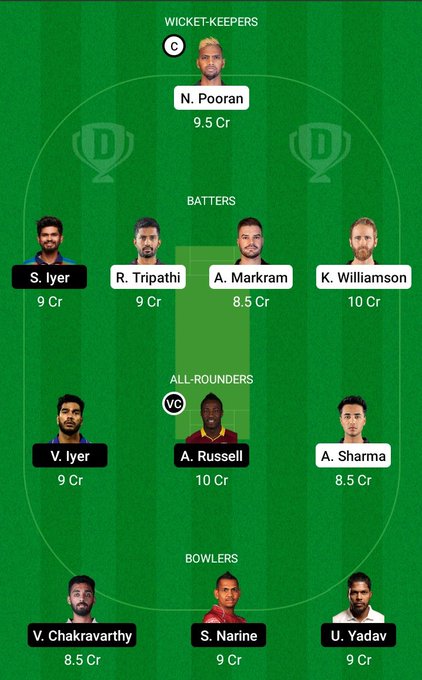