Its the last game of what has been an enthralling season of the IPL. We have have our 4 playoffs spots sealed and SRH PBKS will be fighting for the 6th spot on the points table.

PBKS had one of the most ecplosive batting line ups on paper before this season but they failed to click together as an unit. Mayank Agarwal unexpectadly had his worst season with the bat after scorinh 850 runs at a SR of 150 in last 2 seasons and managed to score only 1 50. Rajapaksa had to make way for Bairstow who himself couldn't buy a run in the middle order. ShahRukh Khan & Odean Smith were another such disappointments. The lone bright spot in the midle order is Liam Livingstone. He has the best SR in this season for a batter and is 3rd on the list of most sixes hit. Arshdeep Singh has the best eco in death overs but is not supported by others enough. This is the 4th consecutive season where Rabada has taken 15+ wkts and is on the brink of fastest to 100 IPL wkts. PBKS have unearthed a gem in Jitesh Sharma. He scored 215 runs at a SR of 158 batting in low middle order.

Till the last week of April, there were no clouds over SRH's qualification chances for the playoffs as they had won 5 consecutive games and were looking a lethal all round unit. Things have gone only south for the Orange army since that game against GT where they couldn't defend 21 in the last over and lost 5 back to back games against CSK, DC, RCB & KKR. To make matters worse they were marred by injuries. Sundar  suffered a split webbing on his hand, T Natarajan who was SRH's highest wkt taker this season with 17 wkts did not feature 2 games. Marco Jansen & Suchith also had to miss the game against DC. SRH conceded 190 in 4 consecutive games meanwhile during this phase. Perhaps, the biggest letdown of the season is Kane Williamson. He has played over 80 dot balls in the Powerplay and has s SR of 73. According to cricviz analyst, his impact is - 85. SRH will take lot of positives from Umran's performance. He has taken 21 wkts out of which 18 came in the middle overs.

Rahul Tripathi: He has the 3rd best SR in this season ( min 300 runs). And the 5th best SR for a middle order batter since last season.

Liam Livingstone: He had a tough outing last year with an average of just over 8 in 5 games. Liam was the highest scorer in The Hundred with 348 runs. He scored England's fastest ever international century when he reached the milestone from just 42 balls against Pakistan at Trent Bridge. With 60(32) and 2 wkts against CSK, a quickfire 60 against GT and another solo show against SRH proves he has really arrived and its just a glimpse of what we are going to witness in upcoming years.  He has 4 50s as a middle order batter and a SR of 178 in this season. He  has hit 29 sixes so far.

Bhuvaneshwar Kumar/Arshdeep Singh: Both may not have taken lot of wkts in this season but they have bowled brilliantly in the end overs and have an eco of 8.3 and 7.6 respectively. Bhuvi has the most wkts after Bravo in death overs (9)

Jonny Bairstow: Bairstow had a season to forget and found no success in middle order. He was promoted up the order and played a blinder in the powerplay against RCB to gave PBKS an amazing start 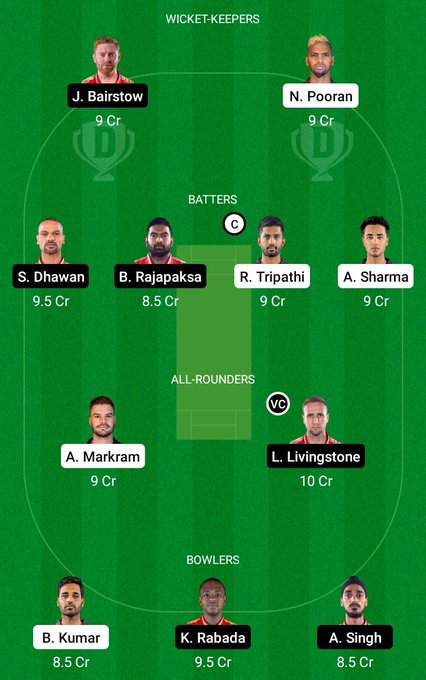