Lucknow had a decent start to their campaign by winning 3 consecutive games before it was thwarted by a fiery Trent Boult spell at Wankhede. LSG came back strong and defeated MI twice & PBKS in the last game to get to the 3rd place on the points table.  KL Rahul scored 2 100s against his favourite opponents. Since 2018, he hasn't missed a single opportunity to score against MI. Middle overs has been LSG's biggest strength in the bowling department. They have the best RR among all the teams. Major factor behind this is the spin duo of Krunal and Bishnoi who have an eco of 5.9 and 7.9 respectively in that phase. One major weakness in Lucknow's line up is no 3. Until last game it looked like Manan Vohra should make way for Manish Pandey but LSG has decided to go with more than 7 bowling options and have backed Chameera & Holder lower down the order with the bat. Youngster Mohsin Khan was impressive againt Punjab in the last game. A tall, hit the deck left arm seamer is a gift to have in any side.

DC have the highest scoring rate in the Powerplay (9.35).  Middle order has been DC's achilees heel this time. None of their batters have managed to score a 50, Rovman Powell was disappointing in the initia games but he has played 2 back to back cameos against RR and KKR. Pant got good starts but could not take DC to the finishing line against GT, RCB, RR & KKR.  Marsh, who was supposed to bat at 3 was down with Covid and injuries. Perhaps, the biggest surprise this season was Khaleel's and Kuldeep's performance. Khaleel has been  economical  with the ball  so far and hasn't let DC miss the services of Nortje. Kuldeep on the other hand has taken 18 wkts out of which 17 have come in the middle overs at an eco rate of 7.9. One major criticism of Captain Pant would be he overbowls his 6th bowling option. For twice in a row Lalit Yadav has been taken for runs after bowling 1 or 2 good overs.

Prithvi Shaw: What makes Shaw different from the current crop of openers? Since Shaw’s IPL debut in 2018, he has scored 1101 runs in the Powerplay at a whopping SR of 149.6. No one has scored more runs than him at a better SR. The next best on this list is Jos Butler with 879 runs at an SR of 147. Shaw already has 2 half centuries in this season.

David Warner: One of the most consistent batters in the history of the league. Warner has marked his presence in this season with 3 back to back half centuries. He has 6 50+  and 2 40+ scores in his last 12 T20 innings. Shaw & Warner are one of the most lethal opening pairs of the tournament. They have now put up 4 consecutive scores of 50+ and that too at an excellent RR.

Jason Holder: One of the most improved t20 cricketers in the recent times. Holder adds immense value to this Lucknow side both with the bat and the ball. He has taken 9 wkts at an eco of 8.7 and all the wkts have come in the middle and the death overs.

Krunal Pandya: He has the best economy rate in this season after Sunil Narine.

Prediction: LSG to win and Holder will be the standout performer for them 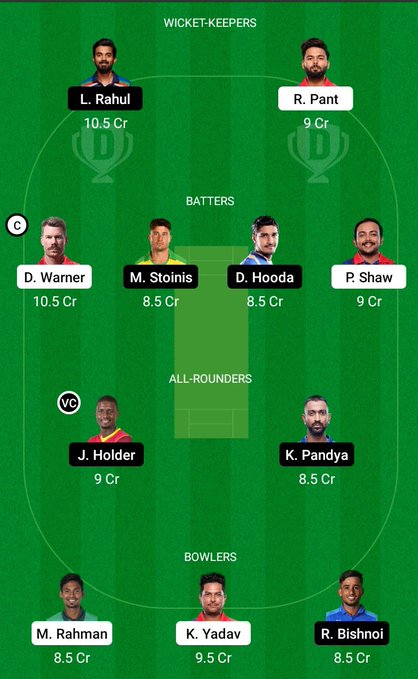 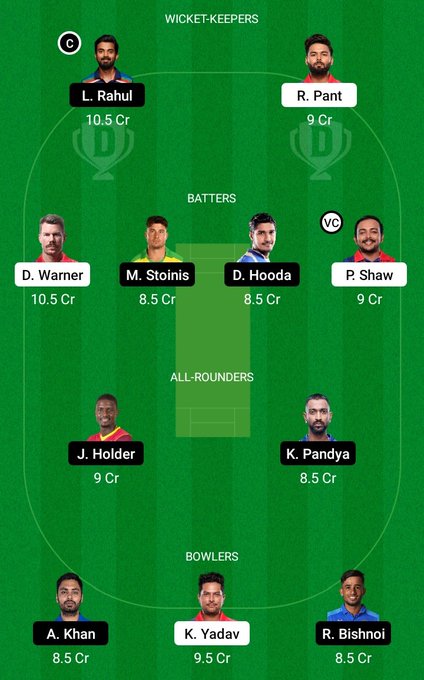