After winning 3 out of the 1st 4 games, KKR have now lost 4 consecutive games agaisnt DC, SRH, RRand GT. The curse of Brabourne continued as KKR have lost all the 5 games played at that venue. Batting has been a major let down so far for with no or little contributions from the likes of Rahane, V Iyer,  Nitish Rana apart from one individual performance in 5-6 games. They have lost 16 wkts in the Powerplay and have not crossed 50 since that opening game against CSK.  Add to that, there has been a stark contrast between their performance with the ball in the powerplay and at the death. Pat Cummins has conceded 190 runs in the 16 overs he has bowled, Varun Chakravarty had conceded runs at an eco of 10  only once in 35 matches before conceding it in consecutive games against DC,SRH and went at an eco of 15 against RR. Sunil Narine is a lone bright spot in the bowling with an economy of 5.4 in 8 games. KKR finally made a wise decision to bring  Tim Southee in place of Cummins. Southee has bowled well in the Powerplay and has 8 wkts at an eco of 6.7

DC have the highest scoring rate in the Powerplay (9.57).  Middle order has been DC's achilees heel this time. None of their batters have managed to score a 50, Rovman Powell has been disappointing except for his cameo in the last game against RR. Pant got good starts but could not take DC to the finishing line against GT, RCB & RR.  Marsh, who was supposed to bat at 3 is down with Covid. This opens up a brilliant opportunity for Sarfaraz Khan. Perhaps, the biggest surprise this season was Khaleel's and Kuldeep's performance. Khaleel has been  economical  with the ball  so far and hasn't let DC miss the services of Nortje. Kuldeep on the other hand has taken 13 wkts in the middle overs.

Andre Russell: The 2 time MVP of the IPL was quiet with the bat in the past 2 seasons but he displayed a scintillating show of power hitting against PBKS and yet again proved why he is one of the most dangerous players in t20 cricket. He scored 49 in the game against SRH, and another 40 odd vs GT and is also contributing with the ball by bowling atleast 2 overs in every game. he took 4 wkts in the last over of last game. Russell strikes at 209 at the death with 74 sixes. He has hit 22 sixes so far.

Prithvi Shaw: What makes Shaw different from the current crop of openers? Since Shaw’s IPL debut in 2018, he has scored 1101 runs in the Powerplay at a whopping SR of 148.5. No one has scored more runs than him at a better SR. The next best on this list is Jos Butler with 860 runs at an SR of 150. Shaw already has 2 half centuries in this season. Shaw has scored 392 runs against KKR at an average of 56 and SR of 171.

David Warner: One of the most consistent batters in the history of the league. Warner has marked his presence in this season with 3 back to back half centuries. He has 6 50+  and one 49 in his last 11 T20 innings. Shaw & Warner are one of the most lethal opening pairs of the tournament. They have now put up 4 consecutive scores of 50+ and that too at an excellent RR.

DC will beat KKR and Kuldeep Yadav could once again be among wkts. 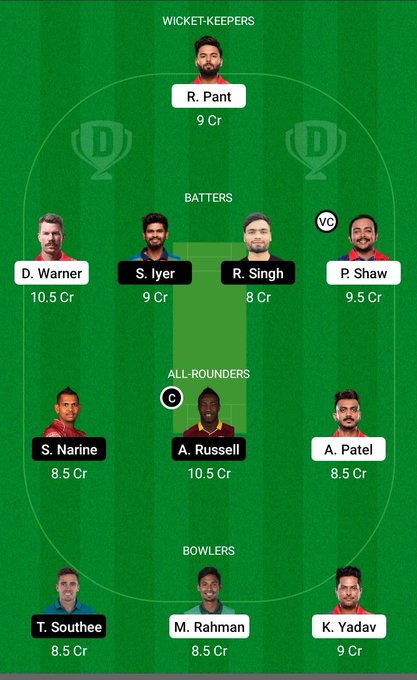 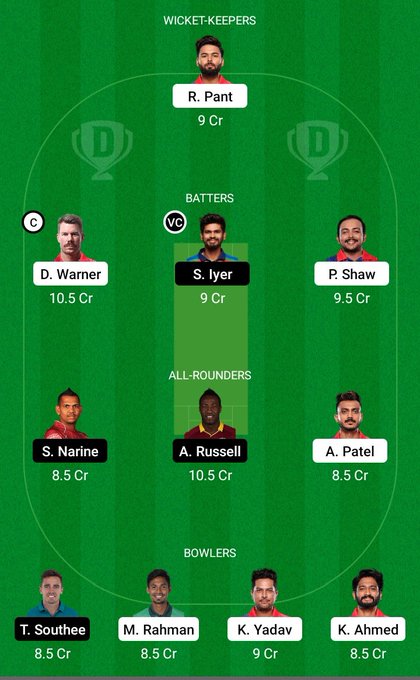