The Gujarat Titans take on the Rajasthan Royals in match no 24 at the Dy Patil Stadium in Navi Mumbai.

Both teams have had a great start to their campaigns by winning 3 out of their first 4 games. Gujarat suffered a blip in their last game when they failed to defend a modest total of  163. Opening pair once again failed to provide a good start and its the right time to rope Rahmanullah Gurbaz in the 11 in place of Matthew Wade who is a wk batter from Afganistan. He is prolific in the T20 format having scored over 1600 runs at a strike rate of 151.8. He has made an immediate impact in leagues around the world by scoring good knocks on his debut in the BPL and the LPL. One thing Gujarat have been at top is to take wkts with the new ball. They have picked up 9 wkts in the powerplay.

Rajasthan Royals started their campaign with 2 consecutive wins and looked set for a straight 3rd win untill DK and Shahbaz pulled off an improbable chase at the Wankhede. RR were again in a spot of bother against Luicknow but a Hetmyer finish and a good performance by Kuldeep Sen on debut won them the game. Middle overs has been RR's biggest strength so far. The spin duo of Ashwin and Chahal have bowled 26 overs and picked up 11 wkts, 10 by Chahal himself whereas Ashwin has been economical at a rate of 7.3. Batting depth is the biggest worry of RR and they have underutilised Riyan Parag in the finisher's role.

-Since 2021, Hetmyer has scored 264 runs in death overs an hit 22 sixes (Most by any batter)
-Jos Buttler has hit most sixes in Powerplay this season (8)
-Gujarat Titans have taken 9 wickets in Powerplay this season
-Shubhman Gill has 5 50s in his last 9 innings
-Rashid Khan has never ended an IPL season with an economy in excess of 7
-Rashid Khan has the longest current streak of wicket-taking innings (15)

Hardik Pandya: India's best all rounder had an outing to forget last year. Due to Injuries, Hardik has not been bowling and subsequently lost his place in the national side for these 2 reasons. This IPL is a great opportunity for him to win the trust back of the selectors and make a strong statement ahead of the t20 wc. In 2019 and 2020, Hardik scored the most runs in the death overs. He smashed 463 runs at a SR of 221 with 39 sixes. He has started decently in his 1st 4 games both with the bat and the ball. He gave only 22 runs in his 2nd match and was economical in the 1st game as well untill the last over spoiled his figures. He picked up the important wkt of Mayank in PP against Punjab and scored a 42 ball 50 vs SRH.

Jos Buttler: Since 2018, Butler strikes at 145.5 in the Powerplay with 726 runs. Regarded as one of the most dangerous white ball batters in the world, he had a brilliant t20 wc where he scored a scintillating 100 against SL on a slow Sharjah Pitch and carried his form in the IPL where he scored another 100 in his 2nd game of the season and a 70 odd in the game vs RCB.

Yuzvendra Chahal: He has been RCB's backbone in the bowling department for years. He parted ways with franchise after being their highest wicket taker with 139 scalps at an economy of 7.6. He is the highest wicket taker (120) in the middle overs phase since his debut. Just like at RCB, Chahal has been one of the MVP's of his new team. He is the purple cap holder with 11 wickets.

David Miller is one of the cleanest strikers of the cricket ball. He has not quite fired in last 2 games but could chip in with a crucial 30-40 given the position he bats.

Rahmanullah Gurbaz: Mathhew Wade has struggled to put bat to the ball, in this case it could open an opportunity for the hard hittinh wk batter from Afghanistan

Gujarat Titans to win the match, Rashid Khan & Lockie Ferguson will be the key players. 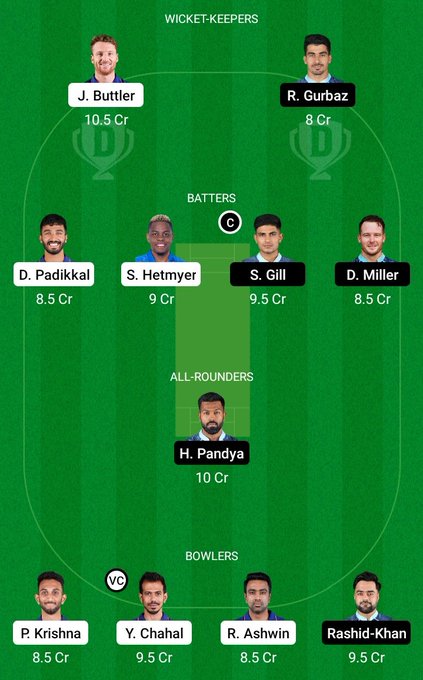 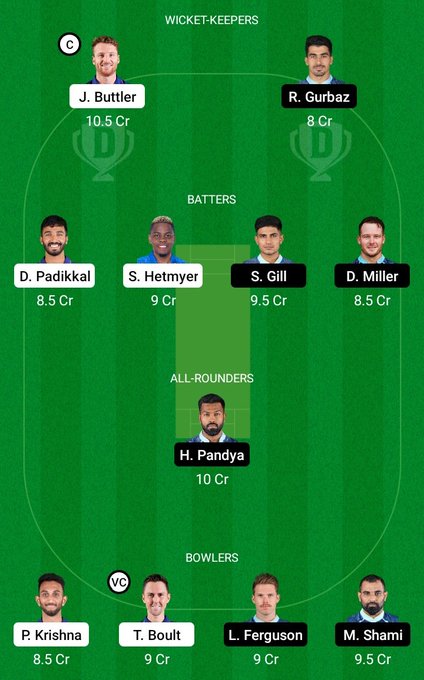