The Kolkata Knight Riders take on the Punjab Kings in the 8th match of 2022 IPL at the Wankhede Stadium.

Punjab will be in high spirits after chasing down 205 against RCB in their first match. Bairstow's arrival will add more firepower to a batting line up that is already dangerous. The bowling department will also be strengthened by the addition of Kagiso Rabada. Since 2019, Rabada has taken the most wickets in the tournament  and he took atleast 1 wicket in 25 consecutive games. Their batting order has a lot of options. Rajapaksa, Livingstone, Shahrukh Khan, Odean Smith, and others have free rein from ball 1.

KKR started their campaign on a high note when they defeated the defending champions CSK in a one sided game. They could manage only 128 against RCB but fought till the last over. Umesh and Narine have been exceptional for them so far. Bowling was boosted by Tim Southee who had an excellent T20 WC. Russell looked in pain during the last game and it's unclear whether he will bowl in the next one. This throws KKR's balance off and they will have to make some forced changes. . KKR's fortune largely depends on how Venkatesh Iyer and Ajinkya Rahane start the innings, since they do not have much firepower in the side aside from Russell late in the order, and a perfect stage needs to be set for him

PBKS: Jonny Bairstow has joined the squad. Nathan Ellis is currently on national duty and will join on 6th April. Kagiso Rababa will be available from the 2nd game.

KKR: Tim Southee has joined the KKR squad. Pat Cummins and Aaron Finch will be available after 6th April.

Mayank Agarwal: 865 runs at a SR of 147 in the last 2 editions. No batter scored more runs than him at a better SR.

Shikhar Dhawan: Since his switch to Delhi in 2019, Dhawan has recorded over 1700 runs in the last 3 editions thus making him one of the most consistent players in the league.

Shahrukh Khan: PBKS biggest buy was Tamil Nadu all-rounder Shahrukh Khan. He was expected to fetch huge sum just like he did last year. His last-ball heroics against Karnataka in SMAT Final is just a glimpse of his talent and skills. He has started the current Ranji Trophy season with a 100 which is a really good sign for the franchise. He displayed why he was PBKS' biggest buy in the opening game by playing a handy cameo.

Liam Livingstone: He had a tough outing last year with an average of just over 8 in 5 games. Liam was the highest scorer in The Hundred with 348 runs. He scored England's fastest ever international century when he reached the milestone from just 42 balls against Pakistan at Trent Bridge. His 2 big hits after PBKS' were in a spot of bother at 139/4 is just a glimpse of what lies ahead in the season.

Andre Russell: The 2 time MVP of the IPL has been relatively quiet with the bat in the past 2 seasons. Russell is still one of the most dangerous striker's of the ball in world cricket. With the IPL back in India , we can expect him to be near his "2019" self. Russell strikes at 229 at the death since 2018. A fit Russell adds immense value to the KKR side as he bowls his quota of 4 overs as well

Varun Chakravarty: He has been a revelation and is one of the major reasons for KKR's success in the last 2 editions. 35 wickets at an economy of 6.7 and dot ball % of 36 are highly impressive nos for a spinner. He gave away just 23 runs in the opening encounter against CSK and picked the important wkt of Robin Uthappa.

Umesh Yadav: Since 2018, Umesh Yadav has taken 22 wickets in the Powerplay. 3rd most after Chahar and Boult. 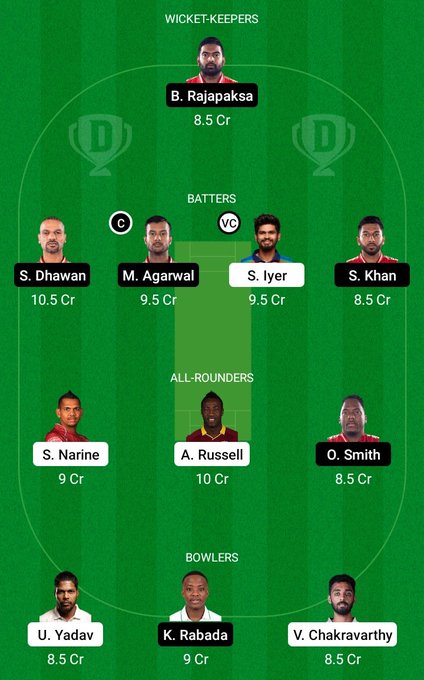