Test cricket was back this month and entire March has plenty of exciting Tests scheduled in this WTC Cycle. "A new look" England is set to take on West Indies in a 3 match Test series in the Caribbean. Last time Joe Root's men were handed a 2-1 defeat there. That belligerent English side had just thrashed India 4-1 at home and whitewashed Sri Lanka in their backyard 3-0.

Things are a lot different this time. England is coming into this series on the backdrop of a 4-0 Ashes defeat. They have lost 10 out of the last 12 Tests they have played. As a culmination of these events, England have undergone a radical change in squad selection, coaching and administration department. The biggest players who were on the receiving end were the prolific pace duo of Broad and Anderson. Along with them the visitors have taken some obvious calls on Dawid Malan, Rory Burns and Haseeb Hameed. Some new names have been awarded Test call ups such as Alex Lees & Matthew Fisher.

West Indies have won just one series since they beat England in 2019 and that was in Bangladesh where they created history by chasing down a mamoth total. But they have always turned up when the opposition is named England. Visitors have a dismal record in the Caribbean. They last won in England in 2004 and since then they have toured thrice and lost 2 series. Roston Chase, Shai Hope and Rahkeem Cornwall have been dropped from the side while Shannon Gabriel wasn't available because of Injury.

England are placed at the bottom of the WTC cycle and West Indies are just above them at 9. An English win will have zero impact on their chances whereas West Indies have something to gain. This series provides good opportunity for someone like Ben Foakes, Dan Lawrence and Shamarh Brooks to cement their spots, especially Ben Foakes who has been warming the bench for the last 3 years with Buttler in the side. 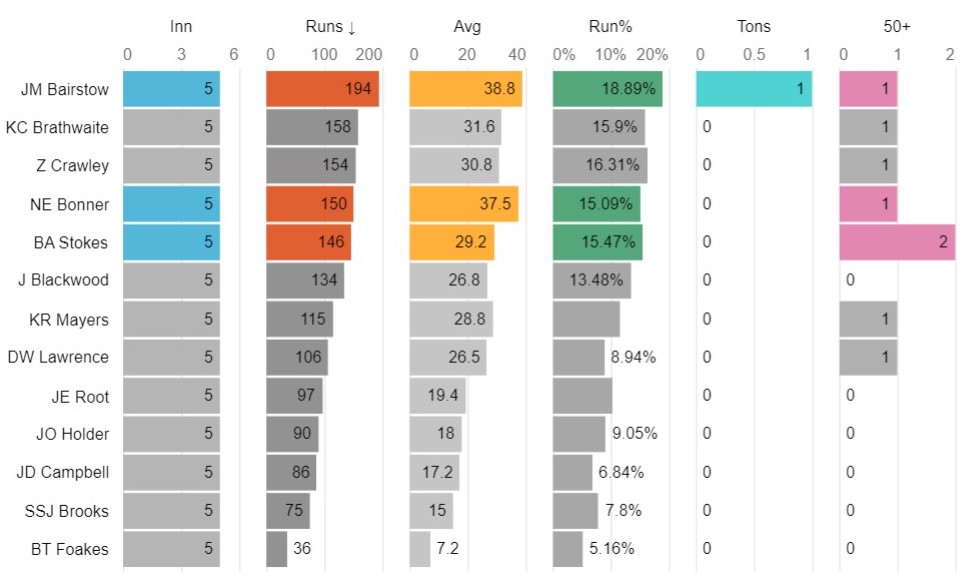 Joe Root: The ICC test cricketer of the year had one of the greatest calender years a batter could wish for. He ammassed 1708 runs in 2021 with an average of 61 and breaking the all-time record of Sir Vivian Richards with most top-scores for the team in a calendar year. What makes his achievement even more special is the 2nd highest run scorer in the side was Rory Burns with 550 odd runs. There was a staggering difference of 1100 runs between the 1st and the 2nd best batter. Joe Root scored a fine 100 in his last Test in West Indies in 2019.

Jonny Bairstow: Having played over 80 Test matches, JB's returns in this format are below average and the graph has only gone south since 2018. However, he showed his old spark and hunger in the longest format when he racked up a top notch 100 in the 4th Ashes test at Sydney. He also recorded a 100 in the 1st practice game of this tour. With Root at 3, JB is expected to hold the important no. 4 position.

Ben Stokes: Ben Stokes scored 174 and took 4 wkts when he last played the men in maroon. Stokes' average is only dipping since that outing. He missed majority of Tests since 2020 due to various reasons and admitted he wasn't totally there in the Ashes. The all-rounder is one of the most mentally strong cricketers. With a relatively new pace attack, Stokes will again play the crucial 4th bowler role if he is fully fit.

Nkrumah Bonner: While everyone in the West Indies line up is averaging in 30s since past 2 years, Bonner at no. 3 has been an exception. He averages at 41.21 from 9 Tests. He is one of the better players of spin and meduim pace attacks. Bonner failed against SA and PAK who have one of the most potent attacks in the world but against England he will be in his comfort zone.

Kemar Roach: In the last 5 years, Roach has taken 109 wickets at an average of 23 and SR of 50. He has been the leader of West Indies' bowling attack. Roach along with Jayden Seales can cause majority of the damage to the visitors since Holder & Alzarri Joseph's numbers are too underwhelming since the pandemic began.

Jason Holder: Often referred to as the best batsman in the side, the all-rounder's 200* in the last series between these 2 sides in West Indies would still be fresh among the visitors. England are Holder's favourite opponents. He averages 36 against them with 2 100s. With ball he averages just a notch below 30 and has scalped 33 wickets.