Till the last week of April, there were no clouds over SRH's qualification chances for the playoffs as they had won 5 consecutive games and were looking a lethal all round unit. Things have gone only south for the Orange army since that game against GT where they couldn't defend 21 in the last over and lost 5 back to back games against CSK, DC, RCB & KKR. To make matters worse they were marred by injuries. Sundar  suffered a split webbing on his hand, T Natarajan who was SRH's highest wkt taker this season with 17 wkts did not feature 2 games. Marco Jansen & Suchith also had to miss the game against DC. SRH conceded 190 in 4 consecutive games meanwhile during this phase. Perhaps, the biggest letdown of the season is Kane Williamson. He has played over 80 dot balls in the Powerplay and has s SR of 73. According to cricviz analyst, his impact is - 85. Tripathi at top and Kane at 5 could just be the ideal swap in reamining 2 games and help SRH salvage some pride by ending their season on a good note. At this stage, they have a chance of qualifying ( mathematically) but also could end up at the bottom of the table.

One can say in hindsight this situation had not arised if MI weren't late in figuring out their best 11. Too many changes were made in the bowling department and Tim David was benched after a couple of failures. In view of the future, it looks a strong side with Brevis, Varma, Tim David and Stubbs who'll probabaly be the core of middle order and with the addition of Jofra, bowling department is only going to get strengthened. MI's position in points table should also be attributed to Rohit & Ishan's form. This was the season where MI needed their most seniormost batters Rohit & Pollard to step up.

Rahul Tripathi: He has the 2nd best SR in this season ( min 300 runs). And the 5th best SR for a middle order batter since last season.

Tilak Verma: The U 19 star came into limelight after samshinh 215 runs in SMAT at a SR of 147. He has shattered many records in his debut season like youngest to score a 50 for MI, most runs in a season for a teenager, 7 30+ scores.

Jasprit Bumrah: : A rare off season where he took just 5 wkts before the last game but made a loud statement by taking the 2nd best figures by an Indian bowler in the IPL. His eco hasn't been that bad as the wkts column suggests and with his new found rythm he could run through SRH's line up.

Daniel Sams: After a horror outing against KKR where he was smashed for 34 runs in an over, Sams has made a big impact in last 3-4 games  with the ball in Powerplay. 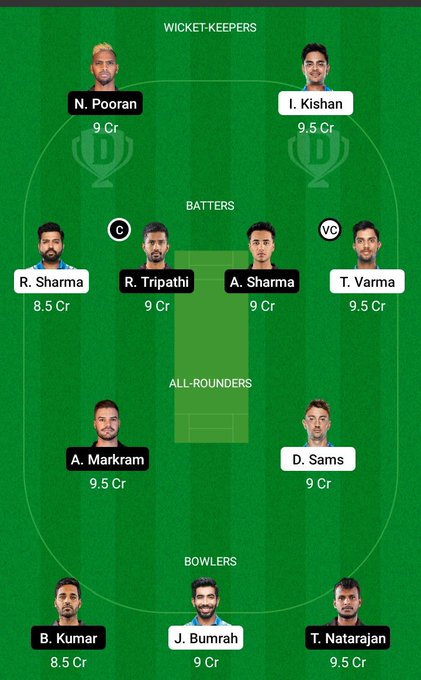 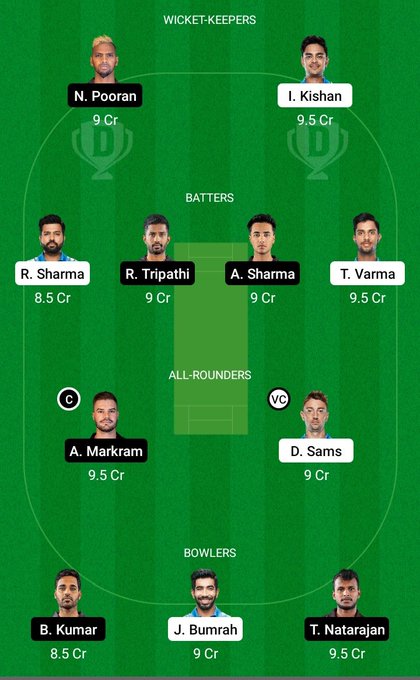