We are into the final stages of the tournament and the race for Qualifiers is getting more & more trickier day by day. Apart drom GT who are almost qualified, there are 7 teams who are fighting for the remaining 3 spots. Things have become interesting after RCB's win yesterday night. SRH at one point looked like they will comfortably get into playoffs but 2 back to back losses & other results have dented their chances big time.

It won't be wrong to say SRH are by far the best bowling unit in this tournamnet.  SRH's management should be lauded for having faith in Bhuvi and Natarajan during auctions given their injury concerns and form in last 18 months. T Natarajan has led from the front with 17 wkts, Fast bowling sensation Umran Malik has 15 wkts after a shaky start to the season. Suchit had filled in for Sundar in his absence. Jansen ran through RCB's and KKR's top order in back to back games and Bhuvi has scalped 9 wkts at an eco of 7.3. SRH are the best bowling unit in death overs with 23 wkts at an avg of 14.8. They had a rare bad day at the office against GT but who has succeded against the wrath of Miller, Tewatia & Rashid. Coming to the batting department, SRH were the 2nd worst performers in PP with a scoring rate of 6.81 before the last game. Kane Williamson has been a major let down and hasn't contributed at all apart from a 50 against GT.

DC have the highest scoring rate in the Powerplay (9.54).  Middle order has been DC's achilees heel this time. None of their batters have managed to score a 50, Rovman Powell was disappointing in the initial games but he has played 3 back to back cameos against RR, KKR & LSG. Pant got good starts but could not take DC to the finishing line against GT, RCB, RR, KKR & LSG.  Marsh, who was supposed to bat at 3 was down with Covid and injuries. Perhaps, the biggest surprise this season was Khaleel's and Kuldeep's performance. Khaleel has been  economical  with the ball  so far and hasn't let DC miss the services of Nortje. Kuldeep on the other hand has taken 17 wkts out of which 16 have come in the middle overs at an eco rate of 7.9. One major criticism of Captain Pant would be he overbowls his 6th bowling option. For twice in a row Lalit Yadav has been taken for runs after bowling 1 or 2 good over

21 IPL games have been played at Brabourne.
Teams batting 1st have won  10/21 games.

Aiden Markram: In the past one year, Markram has scored 570 runs for SA at a SR of 148. He had a very good outing in t20 wc and was featured in ICC's team of the tournament. Markram is also a useful part time off spinner and does the job well in Powerplay. He was the top scorer for SRH in the 1st game and scored a 50, registered his 2nd one in the game against KKR. and remained not out on 41 against PBKS and again scored a 50 v GT. He is the only middle order batter along with Surya to have 4 scores of 40+

David Warner: One of the most consistent batters in the history of the league. Warner has marked his presence in this season with 3 back to back half centuries. He has 6 50+  and 2 40+ scores in his last 13 T20 innings. Shaw & Warner are one of the most lethal opening pairs of the tournament. They have now put up 4 consecutive scores of 50+ and that too at an excellent RR. Today would be the 1st time Warner is going to playing against SRH.

Abhishek Sharma: Had a poor start to the season and their were questions regarding his price tag and why SRH wanted him at all cost. Abhishek is now the 5th highest run scorer of the tournament with 324 runs at a SR of 134. He has been consistently providing good starts to SRH in PP.

Rovman Powell: Promoted to no 4 against Eng in the t20i series in Jan, Powell smashed a scintillating 100 and announced his comeback in the national side in style. His entry point were questionable in few games since he is still vulnerable against leg spin but at no 6 he has played 3 back to back knocks of 36(15), 33*(16), 35(21)

Umran Malik: The pace sensation from Jammu now has a 4wkt and a 5 wkt haul in this season and is improving day by day. Today might be another day where SRH will use him as an enforcer in the middle overs against the fragile middle order of Delhi. 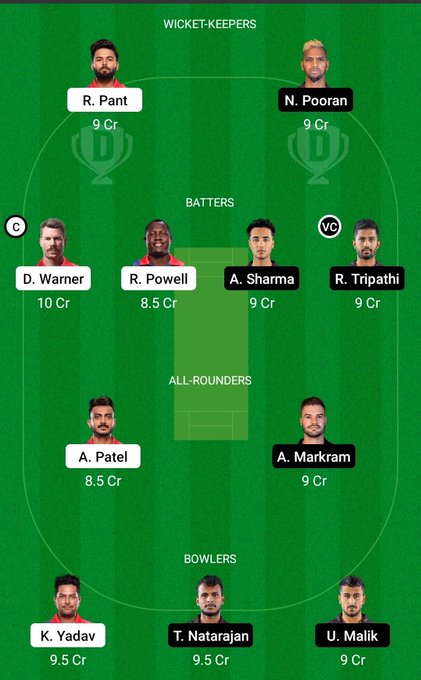