The Chennai Super Kings lock horns with Punjab KIngs in match no 11 of 2022 IPL at the Brabourne Stadium. Both sides have faced defeat in their last encounter.

This is for the 1st time in the history of tournament CSK have lost their 1st 2 opening games. Lucknow Super Giants chased down the 5th highest total ever in IPL as Ewin Lewis and the young sensation from Delhi Ayush Badoni steered them to a famous 6 wkt win. There were plenty of positives for CSK with the bat, Moeen Ali started from where he left last season, Robin Uthappa again provided them with an explosive start.  Shivam Dube had an evening of 2 halfes. 1st where he shone with the bat and 2nd where he was taken for 25 runs in the penultimate over. MS Dhoni displayed his vintage best by scoring 16 off 6 deliveries. CSK's bowling looks out of depth and with Chahar not available till 25th it only adds to the misery. However, Proteas all rounder Dwaine Pretorious had a decent debut with the ball. Pretorius had an outstanding t20 wc where he took 9 wkts from 5 games at an average of 11. CSK would look to include Adam Milne in place of Tushar Deshpande.

PBKS' spirits were high as they chased down 205 in the opening game against RCB. However, their next outing was quite the opposite as they managed just 138 against KKR. PBKS will be strengthened by the addition of Jonny Bairstow and it would be interesting to see how they accomodate him in the 11. Bhanuka Rajapaksa hasn't put a foot wrong so far. Ideally, Odean Smith could make way for Bairstow and Raj Bawa could make way for Rishi Dhawan. Rishi led Himachal to Vijay Hazare trophy win, scored 258 runs and took 17 wickets.

Punjab Kings: Jonny Bairstow has joined the squad and is most probably available for today's game. Nathan Ellis is currently on national duty and will join on 6th April.

IPL is returning to Brabourne Stadium after 2014/15.
Record at Brabourne

Ruturaj Gaikwad: 635 runs in IPL 2021. This was a record breaking season for the youngster who scored most runs in an edition by an uncapped player and won the Orange cap. Ruturaj has been in terrific form since then. He was the top scorer in VHT with 603 runs at an average of 150 and scored 259 runs in SMAT at an average of 51 and a SR of 149. His start this season hasn't been a good one and was unlucky to get run out in the last match

Moeen Ali: CSK was boosted by the all rounder's presence against Lucknow. Moeen Ali has scored 266 runs in the middle overs since last season at a SR of 140.

Mayank Agarwal: 865 runs at a SR of 147 in the last 2 editions. No batter scored more runs than him at a better SR.

Shikhar Dhawan: Since his switch to Delhi in 2019, Dhawan has recorded over 1700 runs in the last 3 editions thus making him one of the most consistent players in the league. Both Mayank and Dhawan are yet to fire in this season.

Shahrukh Khan: PBKS biggest buy was Tamil Nadu all-rounder Shahrukh Khan. He was expected to fetch huge sum just like he did last year. His last-ball heroics against Karnataka in SMAT Final is just a glimpse of his talent and skills. He started the current Ranji Trophy season with a 100 which is a really good sign for the franchise. He played a handy cameo in the opening game against KKR

Liam Livingstone: He had a tough outing last year with an average of just over 8 in 5 games. Liam was the highest scorer in The Hundred with 348 runs. He scored England's fastest ever international century when he reached the milestone from just 42 balls against Pakistan at Trent Bridge. His 2 big hits after PBKS' were in a spot of bother at 139/4 is just a glimpse of what lies ahead in the season. 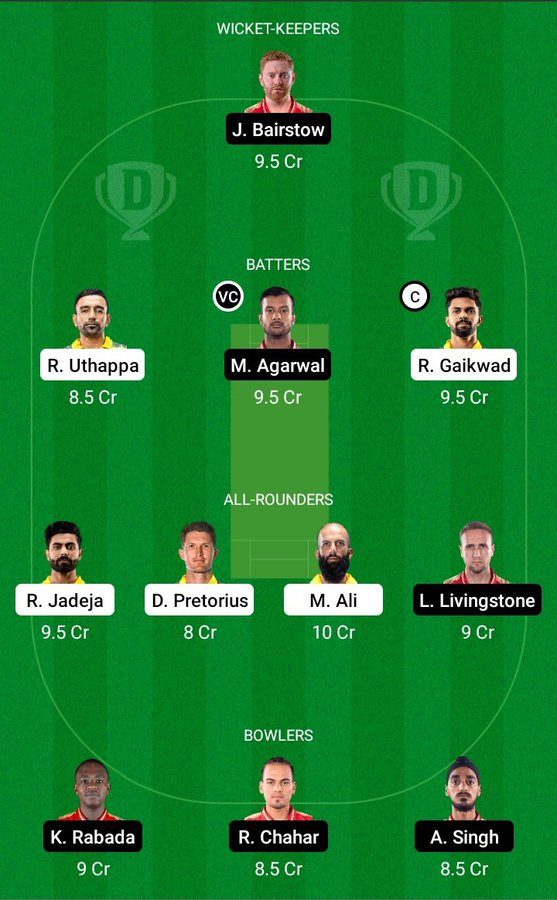