The Delhi  Capitals take on the Lucknow Super Giants in match no 15 of 2022 IPL at the Dy Patil Stadium in Navi Mumbai.

Delhi started their campaign by pulling off a memorable chase against MI in the dying hoours of the match. They started well in the last game as well but cwere let down by their bowlers in middle and end overs. Delhi will be immensely boosted by the additions of David Warner and Anrich Nortje. Nortje was DC's most impactful bowler in 2020 and 2021 with 34 wkts at an economy of 7.7 and dot % of 44. Warner & Shaw could potentially be the best opening pair in this season. No one has scored more runs than Shaw in powerplay at a better SR since 2018. DC's biggest weakness so far has been poor starts in the powerplay and Axar Patel going wicketless in the 2 games. Axar has the best economy for a left arm spinner in IPL  and no one has bowled more overs than him at a better economy rate. He is 5 short of getting to 100 IPL wickets.

Lucknow came back strong with back to back wins against CSK and SRH after losing their opening game. Deepak Hooda and young sensation Ayush Badoni have been their biggest match winners. Team balance looks great with the addition of Jason Holder and further going into the tournament we may see Lewis, QDK, Stoinis and Holder as their 4 Overseas players. Manish Pandey and Andrew Tye have been disappointing so far. Avesh Khan was back at his best by picking up 4 wkts against SRH. Bishnoi has taken only 2 wickets but he has managed to put the lid on the scoring rate and is bowling at an eco of 7.3 this season.

DC: David Warner and Anrich Nortje are available for today's game. Warner will replace Seifert at the top and Nortje might come in for Khaleel Ahmed.

Quinton de Kock: He was one of the pillars of MI's batting line up. After switching to MI, QDK scored 500+ in 2 seasons. In Powerplay, he has scored the 2nd most runs in the last 3 seasons.He strikes at 152 against Pace since 2019

Prithvi Shaw: What makes Shaw different from the current crop of openers? Since Shaw’s IPL debut in 2018, he has scored 942 runs in the Powerplay at a whopping SR of 146.8. No one has scored more runs than him at a better SR. The next best on this list is Jos Butler with 703+ runs at an SR of 148.

Rishabh Pant: Delhi's skipper has scored 2543 runs at a SR of 147 since his debut season in 2016. Only AB De Villiers has scored more runs than him in this period at a better SR. He thrashed all records when he recorded the most runs by an Indian middle order player with 684 runs in the 2018 edition. He has the most runs in middle overs 1742 with 72 sixes.

Ravi Bishnoi: The 2020 U19 WC star succesfully made it into the national side in the recently held home series against WI. He won the MoM award on debut. He has an eco of 7 and taken 27 wkts since his debut in 2020 out of which 22 came in the middle overs.He gave away just 24 runs and picked 2 wkts against CSK which was a run fest and almost 420 runs were scored in the match.

Avesh Khan:He broke the headlines when he became the most expensive uncapped player in the history of IPL when he was bought by LSG for 10 crores. Last IPL was a breakthrough season for this pacer from Madhya Pradesh. He took the 2nd most wickets (24) at an esteemed economy of 7.4. That was the 2nd best economy for a pacer after Siraj and only second to Yuzi Chahal if we consider minimum 15 wickets criteria.  He took 10 wickets at the death at an economy of 8.9. He has been a touch expensive in the 1st 2 games of this season but came back strong with 4 wkts against SRH.

Ayush Badoni: Referred to as Baby AB because of the range of the shots his possesses, Badoni scored 54(41) on debut after walking out to bat on 29-4. He was fearless while taking on the best T20 bowler Rashid Khan. Lucknow were in even more trickier situation against CSK chasing 211. Badoni held his nerve and scored 19(9) to push Lucknow over the line.

Rovman Powell: Promoted to no 3 in the series against England, Powell scored a scintillating 107. He also displayed his skills in the recent t20i series against India. Powell is one of the most brutal hitter in white ball cricket. With Marsh's unavailability, its expected he'll take the no 5/6 position in the batting line up and play the finisher's role.

David Warner: He is back where it all started. The man of the tournament of 2021 t20 wc would be itching to make an impact after a disastrous outing last season.

Deepak Hooda: Lucknow were found wanting in 2 games against CSK and SRH, Hooda produced a counter attacking innings and scored 2 half centuries. 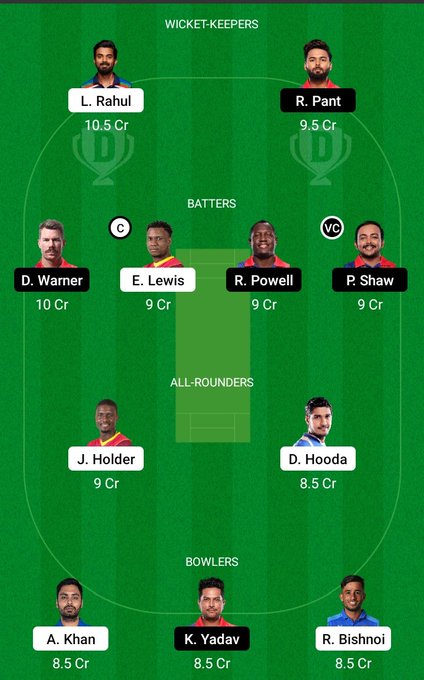 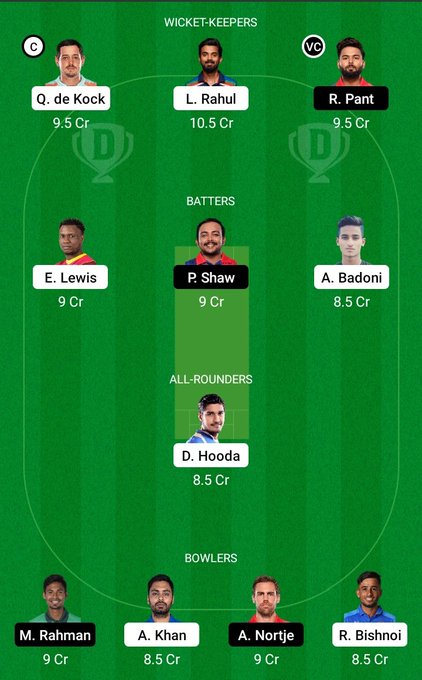 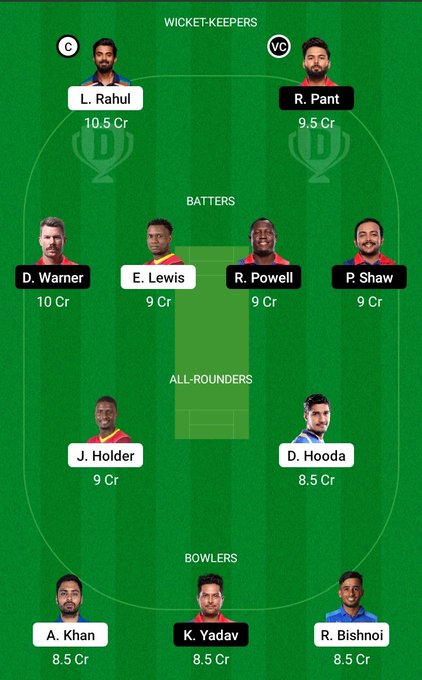