GT have become the 1st team to qualify for the playoffs after their 62 run win over LSG last night. LSG too are almost there and RR have been knocking on the doors with 14 points. Today's win will almost get them a playoff ticket unless we witness some unexpected series of events which could lead to a team with 16 points without a playoff spot. The equation for DC is simple, win 3 out of the next 3 games with a better NRR margin and wait for other teams results to see where they end up.

2019-2021 was a golden period for the franchise, they made it to the playoffs all 3 times and even reached the finals in 2020. Many echo the same sentiment that it was DC's best chance to win the trophy and it could take a while to build that type of squad again. DC have suffered a huge set back with Shaw's unavailability due to illness but they will be relieved after Nortje's form in the last game. Middle order has been DC's achilees heal. Apart from Powell no one has scored a 50 yet. Pant is getting good starts in almost every game but is unable to see them through over the finishing line. Another area of concern is Kuldeep's blow hot blow cold form. He has taken 19 wkts so far, but almost half of them have come against his former team KKR and he has been expensive in 3-4 outings. He has won 4 MoM awards but the picture tells you a different story if we dive a liitle deep into the nos.

RR will be missing their gun finisher Hetmyer who has flown back home for paternity leave. Hetmyer has been the leagues's best batsman in end overs. Since 2021, he has scored 343 runs at a SR of 207 and this year he has scored 210 runs at a SR of 214. Yashasvi Jaiswal was back in the side and top scored in the last game. RR management was too harsh on him for dropping after just a couple of failures. The spin duo of Ashwin - Chahal against Pant and Powell sets for an exciting contest. Pant has scored 172 runs against spin this year at a SR of almost 160.

David Warner: One of the most consistent batters in the history of the league. Warner had marked his presence in this season with 3 back to back half centuries. He has 7 50+  and 2 40+ scores in his last 15 T20 innings. DC will miss the services of Shaw. Shaw & Warner are one of the most lethal opening pairs of the tournament. They have put up 4 consecutive scores of 50+ and that too at an excellent RR.

Rovman Powell: Promoted to no 4 against Eng in the t20i series in Jan, Powell smashed a scintillating 100 and announced his comeback in the national side in style. There were expectations of similar fireworks in IPL, but he failed in the 1st half. His entry point were questionable in few games since he is still vulnerable against leg spin but  he has played 4 back to back amazing knocks and scored 171(87) before facing CSK in the last game. 1st non opener to score a 50 for Delhi this year.

Jos Buttler: Since 2018, Butler strikes at 146 in the Powerplay at an average of 57.6  with 922 runs. Regarded as one of the most dangerous white ball batters in the world, he had a brilliant t20 wc where he scored a scintillating 100 against SL on a slow Sharjah Pitch and carried his form in the IPL where he scored another 100 in his 2nd game of the season, a 70 odd in the game vs RCB and a quickfire 50 in the powerplay against GT, and another 2 100s against KKR & DC. He is now the orange cap holder with 618 runs and has hit 37 sixes.

Yuzvendra Chahal Purple cap holder with 22 wkts at an eco of  7.3. The spin duo of Ashwin & Chahal have been RR's biggest strength in the middle overs. Chahal has taken 17 wkts in the middle overs & tied with Kuldeep who has also scalped 17 wkts. RR have been using him wisely by bowling his 2 overs after the 14th over. He bowled brilliantly in the 18th over of  few games.

Yashasvi Jaiswal: The opener led his team to victory in the last game by top scoring with 68.

Anrich Nortje: After sitting out for the majority of the season due to injury concerns, Nortje looked his best in the last game against CSK. He has picked up 38 wkts for DC since 2020.

Rishabh Pant has been underwhelming this season. He holds the record of most runs (281) without scoring a 50. With playoffs on the line and given the big match player he is, it could well be his day today 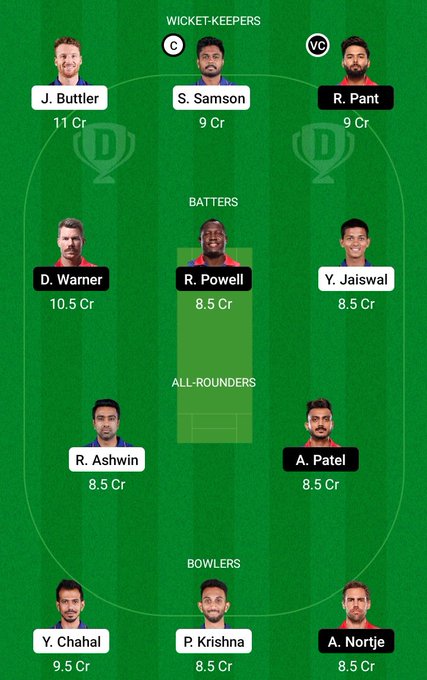