vs South Africa in Johannesburg (2011)

Remember the catch by Yuvraj at point which sent the loyal Indian fans(who hadn't switched off the TV) into jubilation post-midnight?

From 152-5, SA couldn't surpass India's modest 190, losing 6 wickets for 37 runs. Munaf not only ended the defiant innings of Graeme who was the key in the chase batting at 77, he also bagged 2 wickets in what became the final over of the innings including the crucial wicket of Parnell.

Interestingly, Parnell had punched Munaf on the back foot for a 4 in the previous spell. But this time, with one needing to secure a relieving victory, the ball found safe hands of Yuvraj.

Munaf deservingly became the Man of the Match for his 8-0-29-4 in this stunning, stunning victory for his 120-ish riddling deliveries. 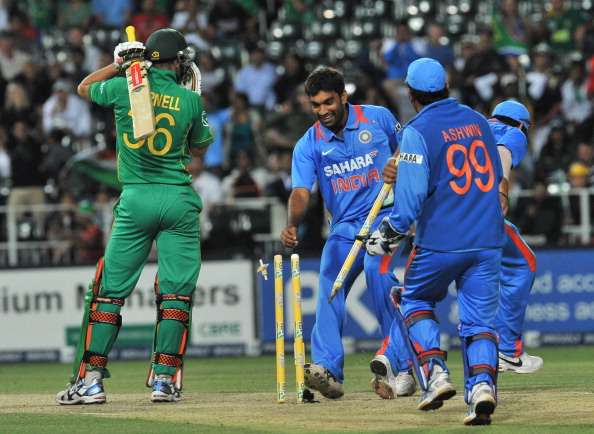 It was only the 25th occasion in ODI history when a team won by 1 run, with India doing it for the 4th time & twice to SA within 12 months. It also served as a morale boost for the team since India were 0-1 down in the series in foreign conditions and a loss in this match would have closed most doors for a comeback. Even though India went on to lose the series 2-3, the drama in this match made sure it wasn’t annihilating.

In the WC-2011 opener, when India met Bangladesh in Dhaka on a pitch full of runs, India had put on a huge target of 370 thanks to Viru's 175(83% control) & Kohli's 100*(82% control). There was no stopping these Delhi-Duo as they demolished the hapless Bangladesh attack in their signature styles.

Defending the mammoth 371, a horrendous start by Sreesanth sent chills across the nation refreshing the memories of the 2007 debacle. Conceding majorly to Kayes, including 24 in the 5th over, Sreesanth couldn’t stop Bangladesh openers from relishing the track reaching 51 after just 5 overs without any loss.

In comes Munaf in the 7th over where he took only 4 balls to get rid of Kayes who was looking very dangerous in his backyard. After locking an economical 1st spell of 5 overs, Munaf returned in the 33rd to get rid of a well-set Tamim with his 1st delivery itself. Cant call Bangladesh to be cruising at that point but were very much in the game.

With that wicket, it widened the crack through which Indian bowlers ran through the middle order as Munaf himself removed Mahmudullah and Islam in successive overs. Finished with formidable figures of 48-4 from his 10. Underrated spell. One of many in that iconic tournament like the Semi Finals performance where his cutter to Razzaq is as fresh in our memories as the roar that followed.

There is something with Munaf and tournament openers. We remember this match for the beautiful spell of Munaf & Pathan in the Champions Trophy opener vs England.

Although, Indian fans don't remember this series very fondly since we crashed out from group stages after losing the next 2 games to West Indies & Australia.

In spite of the fact that England wasn't doing well that year, winning only 25% games in 2006, they had some momentum with back to back wins in the last 2 games along with some key batters in KP, Strauss, Flintoff, Collingwood, and Bell.

The ball found the legs of Bell, Flintoff & Yardy before wicket inside first 8 overs with Munaf picking 2 of them. The disciplined start by the duo ensured England were on the backfoot. Soon Strauss and KP gave easy catches to slip who were done by short of length deliveries by Pathan & Munaf respectively, leaving England in tatters after 19 overs with just 55 on board. 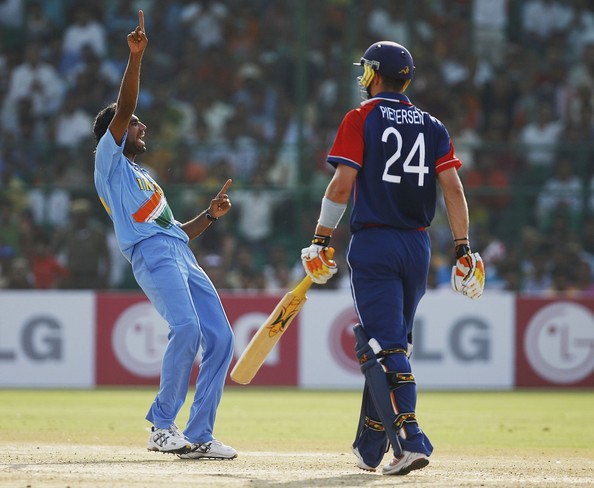 England could manage 70 more while Powar and Bhajji finished the job due for them.

Munaf was adjudged the Man of the Match for dismembering the top order with his discipline and outstanding figures of 8-2-18-3. Quite an ironically memorable match for Indian fans where England was on the receiving end of the seam attack by Indian pacers.