They say IPL is won at auction tables. For the 2nd consecutive time KKR have made a big mess in the mega auctions. To add salt to injury, Alex Hales pulled out of the tournament. KKR could have signed a good replacement in Paul Stirling but they decided to bring in Aaron Finch who is struggling to put bat onto the ball in last 2 years. KKR's opening combination is a mess, they are trying a new pair in every new game. As a result, their 2 big guns Russell and Narine have to carry the entire team instead of KKR supporting them with good players. Their hopes of qualification are almost over even if they win their remaining 2 games and it would require a big miracle and an insane amount of bottling by the other teams for KKR to get through.

Till the last week of April, there were no clouds over SRH's qualification chances for the playoffs as they had won 5 consecutive games and were looking a lethal all round unit. Things have gone only south for the Orange army since that game against GT where they couldn't defend 21 in the last over and lost back to back games against CSK, DC & RCB. To make matters worse their squad has been marred by injuries. Sundar has again suffered a split webbing on his hand, T Natarajan who is SRH's highest wkt taker this season with 17 wkts did not feature in last 2 game. Marco Jansen & Suchith also had to miss the game against DC. Perhaps, its now the right time to take a call on Williamson's place in the squad. He has played 11 games and is striking below 100. According to cricviz analyst, his impact is - 85. Williamson has played 72/127 dot balls he has faced in the Powerplay. Tripathi at top and Kane at 5 could just be the ideal swap.

Andre Russell: The 2 time MVP of the IPL was quiet with the bat in the past 2 seasons but he displayed a scintillating show of power hitting against PBKS and yet again proved why he is one of the most dangerous players in t20 cricket. He scored 49 in the game against SRH, 40 odd vs GT and another 40+ score against LSG and is also contributing with the ball by taking atleast 1/2 wkts in every game. He took 4 wkts in the last over against GT game. Russell strikes at 209 at the death with 74 sixes. He has hit 28 sixes so far.

Rahul Tripathi: He has the 2nd best SR in this season ( min 300 runs). And the 5th best SR for a middle order batter since last season. He scored a 70 odd against his ex team in the last encounter and has a good head to head record against Narine and Varun.

Umran Malik has leaked runs in 3 consecutive games after the 5 fer against GT. KKR's line up is susceptible against pace and he could ru through their batting order once again. 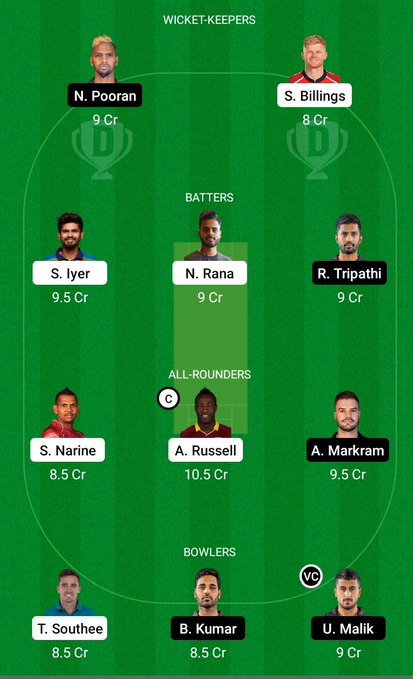 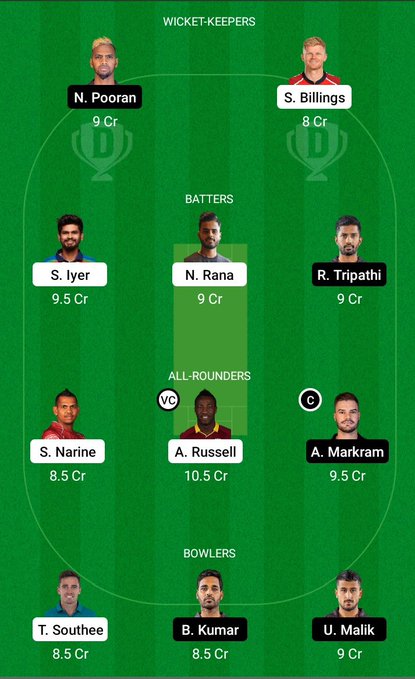