The Lucknow Super Giants take on Royal Challengers Bangalore in match no 31 at the DY Patil Stadium.

RCB's biggest concern is its top order and scoring rate in Powerplay. Anuj Rawat has scored 73 runs at a SR of 96, His partner Faf du plessis fares even worse with 61 runs at a SR of 81.3. Virat Kohli strikes at 113 having scored 25 runs. RCB have the 2nd worst scoring rate in the powerplay with 6.6 after SRH who score at 6.1. Another department where RCB have fared poorly is the the death bowling. They have picked up only 5 wkts (least) and conceded runs at 13.2 (second worst). Dinesh Karthik, Shahbaz Ahmed in the batting department have been the only bright spots so far. DK is averaging in 190s and his SR is over 200. He has been having a phenomenal season and has looked in zen mode right from ball 1.

Both teams are with 8 points with same wins in same no of matches. LSG's momentum would be high after their win against MI. KL Rahul scored his 3rd IPL and could well register another big score against RCB. Since 2018, Rahul has scored the most runs against RCB and has been their biggest nemesis. One major boost for LSG would be Manish Pandey's appraoch in the last game. He went after the bowlers from ball 1 which is not his style of play. Few changes LSG could try is promote Stoinis up the order, they sent him very late against RR at no 8 and match had disapperead from their grasps by then. Tye for Chameera also won't be a bad option given the latter's death bowling woes.

Ravi Bishnoi: RCB batters except for Glenn Maxwell have a poor record against leg spin.  The 2020 U19 WC star succesfully made it into the national side in the recently held home series against WI. He won the MoM award on debut. He has an eco of 7 and taken 29 wkts since his debut in 2020 out of which 24 came in the middle overs.

Faf du Plessis / Glenn Maxwell: Faf had an amazing 2021 where he scored 633 runs. He started well in 2022 with an 88 but since then has not managed to put big scores under him. Today might be that day for him. Maxwell has scored 602 runs at a SR of 149 since last season. He scored a quick half century in the last game inspite of RCB losing 3 wkts early. Bishnoi v Maxwell is the most important contest of the game.

Jason Holder: The man from Barbados is one of the most improved t20 bowlers in the recent past. He has picked up 6 wkts in the season and also possesses the ability to contribute with the bat

Deepak Hooda: He was the 1st middle order batter to register 2 half centuries in this season.

Wanindu Hasaranga: 11 wkts this season at an eco of 8.5 and dot % of 43. He took the important wkt of David Warner in the last match and dismissed both Pollard & Brevis in the match against MI. These 2-3 wkts in the middle overs basically sealed the game in RCB's favour.

Prediction: LSG to win the match and QDK will be one of the top scorers. 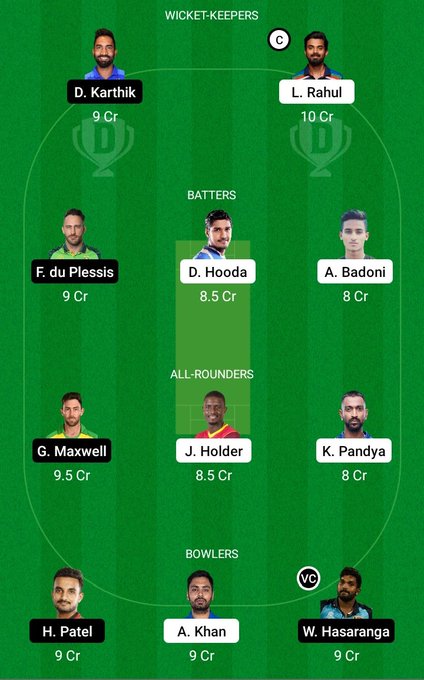 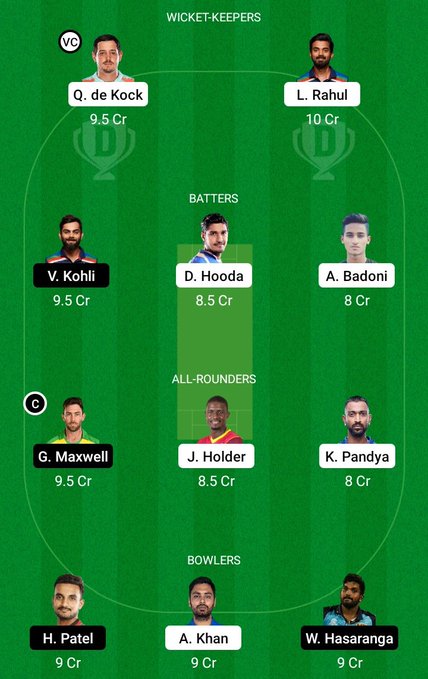